A Brief Treatise on the Rules of Thrones 1.01: Winter is Coming 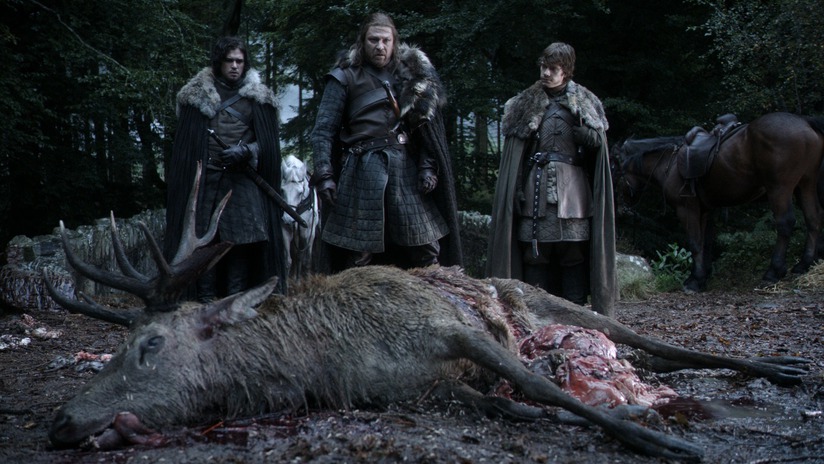 I can remember when I first watched this episode, as a book reader, just feeling an enormous sense of relief - it was good! The next moment of relief was when they confirmed it would get a second season. For me, it was a familiar story brought to life with so much care.

I followed all the news from when it was just talk. I remember The Sword of Truth series (one of the other big fantasy series going at the time, though nowhere near as good) getting a TV series. It actually burned itself out in 2 seasons before Game of Thrones even started. It just basically took some character names and plot elements and then did its own thing.

And in those 2 years, all we heard of Game of Thrones was some casting rumours and then a pilot which was apparently underwhelming so they completely redid it, recasting Catelyn Stark and Dany. I don't think that original pilot ever leaked, and I am curious to watch it.

I started watching the series forewarned that we were in emphatically nobody-is-safe country, but was still slapped across the face with a wet fish by that one, which really does make a big statement about what kind of storytelling this is. Then slightly disappointed come the second episode, when it turned out to be not such a boldly impudent move as it seemed.

Shouldn't that be Bears? Or is this a Book Thing or later development which I have not got to yet?

Also a big dollop of foreshadowing with the wolves, regarding Ned of course, and also Theon. Maybe diegetically recognised in the former case? Being TV-only I'm guessing from appearances here, and Ned's significant exchange of glances with Rodric Cassel may be just a winter-is-coming thing, but that and his general bad-tempered air about the incident could suggest that he's conscious of the symbolism and not amused. The role of the stag doesn't quite seem to match up to events so far for me, but maybe I'm still too early in the game to read that one in full.

Or, as we shout here in the States, "Calvinball.'

In the book at least we're set up to think that it's a straight battle between the Starks (good) and the Lannisters (bad) from almost the beginning. Probably even before Bran falls. It's only really after the Wedding that it's completely clear that's not the sort of story we're in.

In the books they're explicitly conscious of the symbolism. It makes Catelyn at least a little more hostile to Robert. (And Joffrey and if I understand Westeros custom Cersei are technically Baratheons.)

Damn - now I want to see GoT with Bran (or perhaps Joffery) replaced with Calvin but with a talking stuffed tiger + plus the Wall being a giant defensive structure designed to protect people from mutant snowmen.

That and it's ultimately Ned's loyalty to Robert that does him in just as much as the Lannisters.

As for bears, yes, it should be, and I was surprised to see that they did not give him the correct sigil in the opening credits for this one. Rest assured that as soon as they do, the Progress of the Game section will be updated accordingly.

The Lannisters are treated with suspicion, certainly - the withholding of any viewpoint sections for them until Tyrion arrives to partially bail them out casts its own sort of suspicion. But it seems to me a more diffuse sort of suspicion than the TV series goes for, where the Lannisters are fingered at the moment Jon Arryn dies, such that the fall is confirmation and a revelation of what their secret was.

Can I confess that this is my first actual exposure to A Game of Thrones, and that I was instantly thrown out of it by finding out that one of the factions actually calls themselves "The Direwolves of Winterfell" and isn't doodling that as a logo for their heavy metal band during Social Studies class?

The phrase is not actually from the books or the TV shows. I almost went with wolves, in fact. But the phrase, in this case, roughly translates to "these characters are depicted in the opening credit with an image of a direwolf next to the actors' names, and all spend the episode in a place called Winterfell."

Oh this is going to be good!

That was an interesting opening. It's taken on a different structure from the TARDIS Eruditorium and, rather against my expectations, isn't called the Thrones Eruditorium. It's a ridiculous sounding name anyway.

Truthfully the structure of the Eruditorium wouldn't quite work for Game of Thrones. It's too different from Doctor Who to use the "It's MONTH DAY, YEAR." opening. The unique structure of it makes the way it is written intrinsically more fascinating than the Eruditorium, which focused more on the philosophies and ideas of Doctor Who, it's effects on culture and culture's (and history's) effects on it. Treating it as an object, a game that can be played (or in this case observed) is much more fascinating and works much better because the nature of Game of Thrones means that the personal/cultural examination won't work.

Instead we are treated to something more abstract - treating an audiovisual medium perceived through the eyes as a subjective on-going game, similar to chess, even. However it takes less the viewpoint of the player or the observer in that this game isn't chess nor is it really a game, and thus it must try to establish the rules of a game that exists in only the metaphysical sense.

I am looking forward to seeing how this will play out. (if you'll forgive the pun.)

I am *really* looking forwards to this blog. I have my box set that my partner and I received as a gift for Christmas, and all of the books handy (which I have read too).

Really enjoying the laying out of the game board style of the intro to the essay, as well as the breaking down of the episode into sections with a description of the transitions. I found that the latter really added to my re-watching of the episode after reading the post.

Phil - The last shot is Bran falling from a window, shouting “Mornington Crescent.”

Brilliant. I love the fact that you use a reference to a bizarre game within a game designed to make fun of games. With references like this I look forwards to where you'll go with this analysis.

Interesting points about the ambiguity of Tyrion. I recall at the time feeling that there was a lot he was not revealing perhaps, and feeling is he involved in whatever plot was going on? (I had no idea of the overall story, I went in blind the first time). I did though find myself *wanting* to side with him as he was clearly and outsider, as clarified by the 'Bastards' speech with Jon Snow.

Lay down your arms and come in peacefully - like the wolves of Winterfell!

Oh thank goodness. :) If it's just a casual descriptor on this blog, I completely understand; I'd just gotten the impression that that was what they called themselves in the books and on the show, and I'd have found that extraordinarily difficult to take seriously.

This talk of an untransmitted pilot intrigue me. Are there any script transcripts of it? I'm interested in seeing why it was so different, but from a quick search online it seems that there are barely a handful of pictures from it that exist. It's the sort of thing that you'd think would pop up as a DVD extra.

I googled "Mornington Crescent... And I still feel like I'm missing the joke X_X!

Both in the book and the tv show though, Jaime and Cersei act ridiculously suspicious concerning Jon's death, and all but admit it in the chapter where Bran overhears them (I can't remember how the tv show goes but the book is fresh in my mind). I wonder if GRRM just changed his mind later down the road.

It seems odd that the revelations as to who 1) killed Jon Aryn and 2) ordered the attack on Bran comes so late in the game that it is old news rather than the fulcrum on which the drama swings. I guess that is life though.