A Brief Treatise on the Rules of Thrones 1.03: Lord Snow

A Brief Treatise on the Rules of Thrones is generously funded by my backers at Patreon. If you enjoy it, please consider, for just $1 a week, supporting both this project and my compulsive "having a roof over my head" habit. 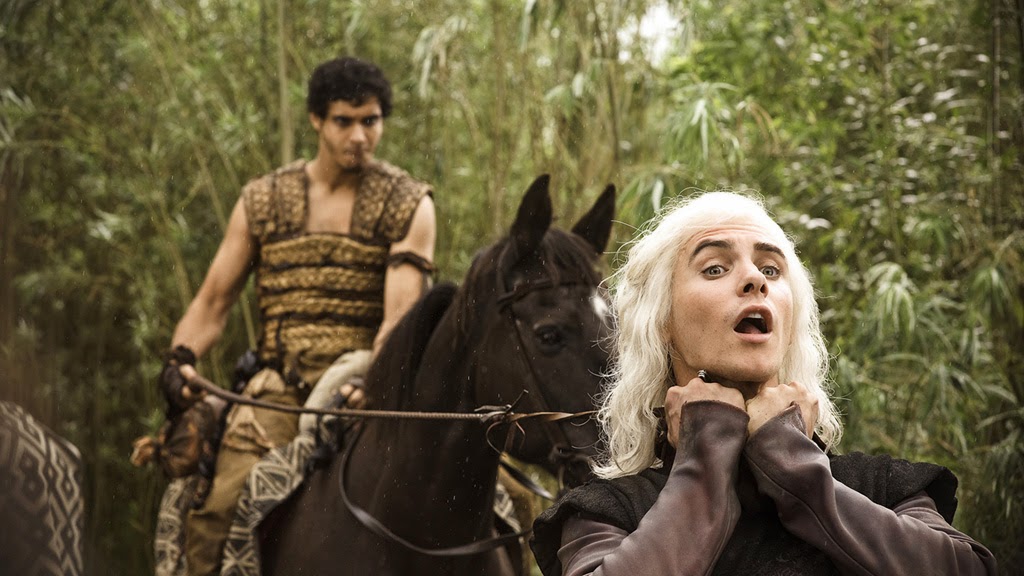 At the episode’s halfway point, Ned and Catelyn are saying goodbye for the last time in their lives.

Did we really have to go there? Also, I finally have to ask - what is Mornington Crescent a reference to?

Other than that, some interesting musings on Arya I hadn't really thought about before.

There's a BBC Radio 4 comedy programme called I'm Sorry, I Haven't A Clue (sometimes shortened to 'Clue') which bills itself as 'the antidote to panel games'. Rounds include things like 'One Song To The Tune Of Another'.

One of the recurring items in the show is the game of Mornington Crescent. It's a game where seemingly anything can happen at any time, with the unconvincing pretense that it has some manner of rules behind it.

Although the first definitive codification of the rules of Mornington Crescent is attributed to the Lambert edition of '63, which remained in print until 1989, and was only superseded by the Rose edition of 2005, the game goes back far longer: the first undisputed reference to the game in something resembling its present form is in one of the discarded plates from Blake's Book of Thel: 'And Moorealan growing gigantic journeyed through Nottingham and Slough, Beulah, Jezreel, Watford, Hampstead, Golgonoozah, and came to rest in Islington and Mornington Crescent; but then spake Morrison you cannot do that for we are using the 1752 DC edition and Golgonoozah is in Nidd.'

(The wikipedia article on Mornington Crescent includes some widespread misapprehensions and should not be considered reliable.)

In America, we play it as a full contact sport known as "Calvinball." American Mornington Crescent is hardcore.

On of the things I am really enjoying Phil about these blog posts is the idea of consistently using the game board as a setting to follow what is happening in the narrative. I like it, especially as I've had experience with table top and RPG gaming.

We did have to go there, I think. One thing that has jumped out at me in breaking down the episode structures for the post intros is that they frequently put very big moments at the halfway points of episodes. This one is particularly big, and I think part of its size comes from the larger tragic context.

As for Mornington Crescent, I can't really top the explanations given above. It is a statement of allegiance and intent on my part.

"We are the Lords of Small Matters here."

Or, translated: Kill This Man. Kill Him Now. I Said NOW.

a scene in which Robert, Barristan, and Jaime reminisce about their first kills, which...serves as a portrait of three subtly different ways in which people relate to their own status as weapons

And of course yet another example of the recurring analogy between sex and violence, but here purely as a game between writers and audience, without the characters being in on the "joke". I suppose the way it's done is connected to this being an original scene, as jumping in on a conversation in a way that invites a wrong guess about what is being discussed is one of those devices that works better on screen than on the page.

Have you thought about tackling this show from a feminist perspective? The degree of venom launched by certain parties at Steven Moffat seems even more out of perspective when one considers some of the ways in which this programme seems to treat women - as little more than naked sex objects a lot of the time. But this has a curious interaction with the source material - as far as I can tell (not having read much of the books), Martin's writing is pretty pro-women. I'd be interested to see what you make of it.

I have, most obviously in "Winter is Coming," where the decision to rework Daenerys's wedding night into a rape scene is particularly striking. It's a theme I'll come around to at some point, but I haven't felt like I have anything to say yet that hasn't been well-covered by other writers.

As far as I can tell, Martin is obsessed with the word "pussy," obsessed with placing his female characters in sexual peril, and never misses an opportunity for lurid descriptions of female arousal.

I've retitled the TV show, in my head, "Male Gaze: the Series," for the way it treats women's bodies as merely decorative, and its comparitive squeamishness about male nudity.

I am, of course, the ten millionth person to say any of these things.

A quick search suggests that Martin makes it through the entirety of Game of Thrones, at least, without using the word "pussy" at all. And while he is fond of lurid descriptions of female arousal, I have to say, being interested in female subjectivity regarding sexuality is a pretty decent result within the sci-fi/fantasy fandom Martin emerges from.

Which isn't to say that there aren't problems, but there's nothing to be gained in oversimplifying the matter, which is a lot of why I didn't just leap in at the first rape to tackle the issue.

That said, I'm writing up "You Win or You Die" now, and I'm pretty much certain to tackle the ludicrous sexposition scene in it, which should touch on some of this.

Hi Phil, is there anything that can be done to promote the cessation of these spamming spell messages? As I usually click the 'notify me' checkbox I get them in my email inbox (including the old posts they spam on).

I notice that when I publish, the comments now are posted immediately, rather than needing for us to prove we are not robots - has this made a difference? Thanks.

I just got about ten emails in a oner as they mass-spammed.

Another quick search suggests Martin has never used the word "pussy" once in all five of the Ice and Fire books, so calling him "obsessed" with the word is rather odd. does he use it in personal conversation all the time?

Probably he's more of a dog person, like Stannis.

I also noticed the sex and violence analogy in this scene. I love how the transition is from a scene outside of a brothel between two of the only characters with a loving relationship to a scene featuring a man whose relationship is the exact opposite, and who reminisces lovingly about murdering people. The way the dialogue is structured to highlight that ambiguity is great.

"Yes, it's been a long time, but I still remember every face. Do you remember your first?"

"Of course, your grace."

"A Tyroshi.Never learnt the name."

For reasons which it would be otiose, at this moment, to rehearse, I briefly pondered the question of which characters would most probably be cat people, and came up with Tyrion, Samwell and, ironically, the Hound.