A Brief Treatise on the Rules of Thrones 1.04: Cripples, Bastards, and Broken Things 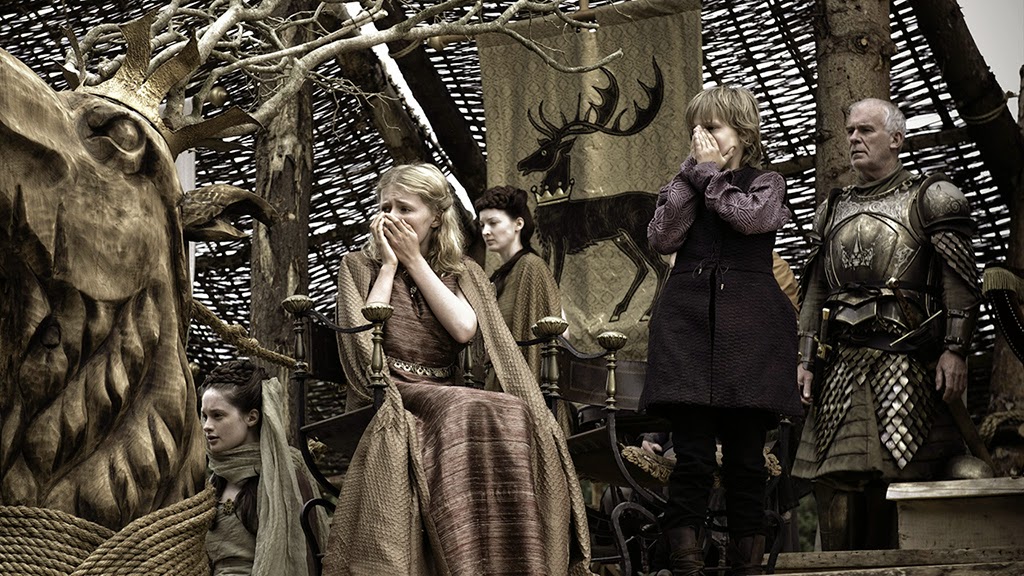 > the addition of one trifling extra crime (one that’s never actually pinned on him in the show anyway)
Is show-Joffrey guilty of this though, or are we the audience to assume this was a Cersei/Jaime plot? The show's past the point of ever addressing this really, and it seems strange not to, given how massive a deal it was at the start.

Also, why does Littlefinger lie about who the knife belongs to? I never realised he had until a recent reread of the books where it is clear that it was Robert's knife not Tyrions, as Tyrion doesn't bed against family. It is a bonkers, risky move on Littlefinger's part to tell such an obvious falsehood that could be easily revealed, only isn't as Tyrion is taken to the Eiyre and stuff goes down. If Tyrion was taken back to Kings Landing and everything brought up before the king, it is likely that odd deception would be uncovered in no time.

"The eighth runs one minute and is set in Vaes Dothrak; the transition is by dialogue, from Thorne talking about sniveling boys to Viserys"
I appreciated that joke a lot.

Yeah, the whole knife business and its mysterious disappearance from the plot seems a weak part of the story (on TV at least) in all sorts of ways.

Cat's behaviour here can be explained in terms of emotion and the appearance of an unexpected opportunity getting the better of rational thought, even when she has already been in the discussion where they acknowledged that there was no point in trying to force the issue without further evidence. But the Starks' failure to notice what a transparently crude and implausible fit-up the use of the knife is until Tyrion points it out, or to give it any consideration after he does, just seems unaccountable. It's one of those cases of forcing intelligent characters (which the Starks, whatever their blind-spots, basically are) to be unfathomably stupid on occasion because the plot demands that things go horribly wrong, to which elaborately plotted dramas seem rather prone (The Wire, otherwise almost flawless in its first four seasons, was a serial offender on this front).

Then there's the even less plausible fact that Tyrion seems not the least bit interested in finding out who framed him or why, or in doing anything about what he does know. The issue momentarily raises its head with the firm implication at the start of season 2 that Tyrion is well aware, as he would pretty much have to be, that Littlefinger dumped him in it by telling the Starks the knife was his, but otherwise vanishes into thin air.

I wouldn't go that far. I think given Littlefinger's history of friendship with Cat (having grown up as practically a younger brother) he would be one of the few people she would 100% trust. Nothing about that ever struck me as odd, especially as I didn't pick up that it WAS a lie until much, much later.

Oh right yes, got you. Yes, I mean in many ways if the knife was Tyrion's, then Tyrion would be the least likely candidate. And it turns out that the knife was Robert's and was stolen to use in the attack, after all!

Of course, why doesn't Littlefinger just say the knife was Robert's? Surely that would sow just as much suspicion with Ned with the added bonus that it's true. I just don't get what he gains by claiming it is Tyrion's.

I don't mean that she, or Ned, shouldn't have believed that the knife was Tyrion's. It's the implausibility of the idea that Tyrion would have chosen to equip an assassin sent to kill a member of a very powerful family, inside that family's own castle, with a visibly very remarkable and distinctive, indeed apparently unique (and incidentally very expensive and irreplaceable) weapon belonging to him, when any blade would have done the job, which should have rung alarm bells.

Being TV-only, it had never occurred to me before today that the knife might not have been Tyrion's (and it seems likely that as far as the TV series is concerned it actually was his, since if it were meant not to be, in this version of the story, we would surely have been shown him denying owning it - and as you point out, it makes a lot more sense for it to be his than not, since Littlefinger would hardly be stupid enough to tell a lie so likely to be exposed, and with such potential to destroy him if it were). But the knife's use for such a purpose was always clearly a frame-up of a comically crude and unconvincing sort (ineptitude that makes perfect sense in itself if Joffrey was responsible).

Having deleted my comment and reposted a revised one, I have now thoroughly confused the thread order. Sorry. Anyway.

Of course, why doesn't Littlefinger just say the knife was Robert's? Surely that would sow just as much suspicion with Ned with the added bonus that it's true.

Yes, that would work better. "Clearly whoever did this was trying to sow discord between you and the King. But who would stand to gain from that? And who would have access to the King's private possessions?" Job done.

"Of course, why doesn't Littlefinger just say the knife was Robert's? Surely that would sow just as much suspicion with Ned with the added bonus that it's true. I just don't get what he gains by claiming it is Tyrion's."

I suppose in the end Littlefinger thrives on chaos and seeks to seed it whenever he can. Certainly from the books it looked more likely from later information that Tyrion gained (and jamie) that it was likely that Joffrey was indeed behind that knife attack, but Littlefinger sought to utilise events for his own means - setting Lannisters against Starks.

And I think in the books the knife was found to have been won by Robert from Littlefinger, so distancing the knife further from himself would make sense.

Tyrion was also an easy target as he was away from Kings Landing, around in the North and then possibly revenge against him would be easy.

So yeah it does get lost in the TV show later on, shame as these events were all parts of the trigger to the chaos that comes

"As already discussed, his eventual role is instead to traverse that dualism - he eventually becomes the first character to meet both Jon Snow and Daenerys Targaryen, and to move from the Wall to Essos."

I would say easily, from last week's episode Lord Snow, that Tyrion became one of the most fascinating characters for me. His discussion with Jon on the way to the Wall as he was reading was great. I could hear his cynicism - directed towards his family and the structures around him, as well as the sneering about the supernatural - and his awareness of his position in life.

My watch has ended, and I'm compelled to point out a slight error that has major implications for Phil's coalescing rules.

Surely Stannis beats Tyrion to the other end of the board? He starts in fire, closely allied with Melisandre, and by the end of season 4, meets Jon Snow north of the Wall.

I'd argue that it's Mellisandre who traverses the board, not Stannis, and much of her journey comes before her first appearance. On the show, both start in Dragonstone. But Tyrion goes from Jon Snow to Daenerys, and I think it's fair to call Jon Snow and Daenerys the definitional ends of the board.

Ah, but one might call Dragonstone and the Wall the "traditional" ends of the board (playing by Targaryan dynastic rules, I suppose), and Stannis would definitely be following traditional rules.

I suppose I will have to accept that you won't be placing Mellisandre (nor discussing the Lord of Light) until she appears. I'll buy that Stannis goes from Fire to the end of the Ice, but doesn't start at the end of Fire.

Actually, I think that would only be so under Targaryen Dynastic Radial Rules. Under Targaryen Traditional Lateral Rules the other end would be Valyria, no?

Well I suppose it depends on whether you were playing the game under the Original Rules of the Dawn (granted there are a number of 'Original' rules), where the board could be moved to allow for advantage for any particular sets of players. The Lateral and Radial Rules are then variations of the many sub-rules that allow the board to be rotated and positioned according to the combinations of scores/dice/manipulations accrued by players - the most bizarre of which is the one where the board is set spinning like a top on the player's head with the lowest score.