A Brief Treatise on the Rules of Thrones 1.07: You Win or You Die 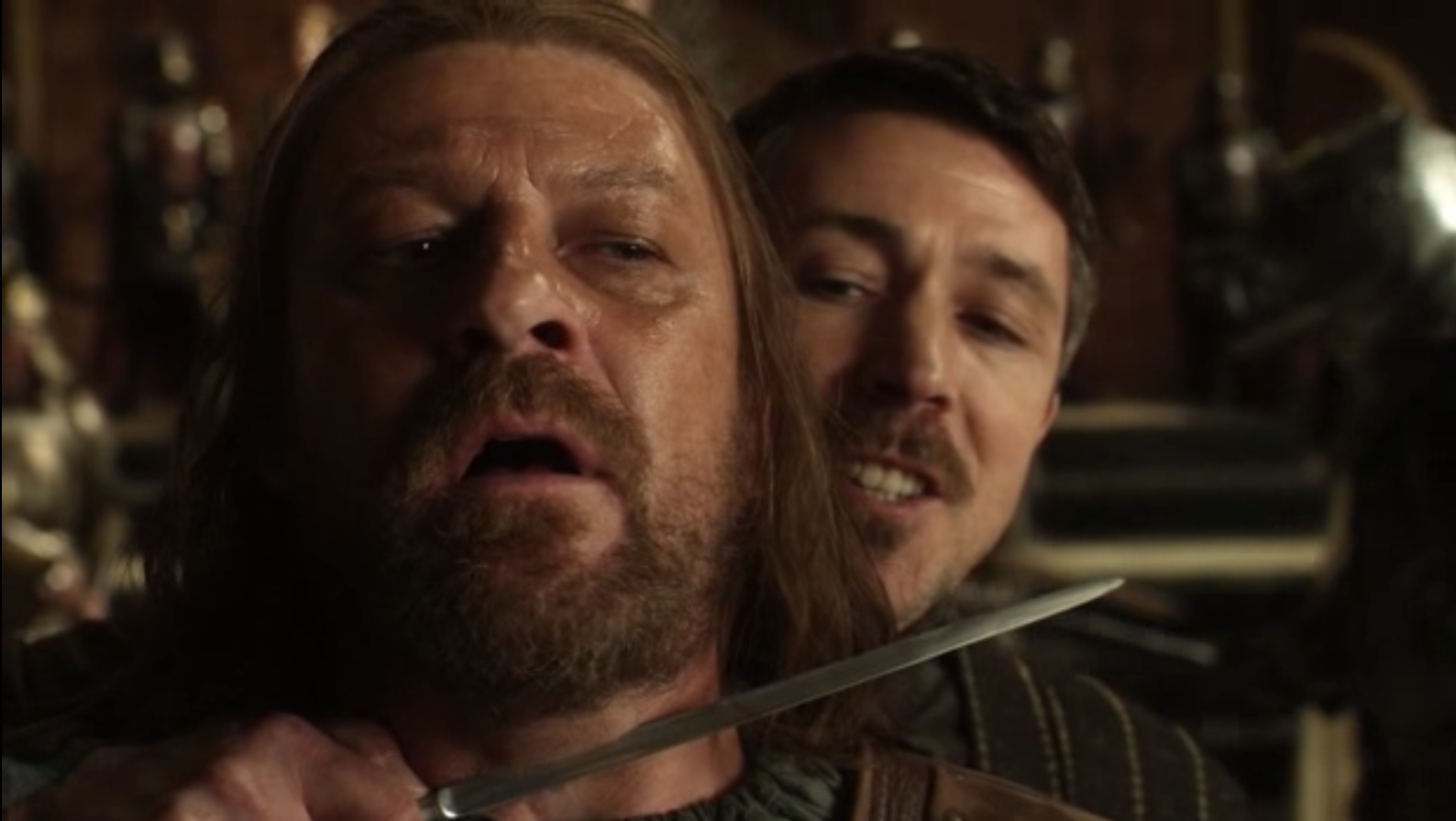 A Brief Treatise on the Rules of Thrones is brought to you by my backers at Patreon.

>...does so with intense symbolic bombast, such that the audience’s first sight of Tywin is as he butchers a stag.
Oh god dammit, that never clicked!

> and thus saw eliminating Daenerys as a safer move than it was.
It totally was a safe move though, and logical. At this point, Dany is considered a non-player, a weak-willed little girl with absolutely nothing of value besides her use as a pawn in marriage to get Drogo's army. Westeros has never had a queen after all. Drogo was reluctant to cross the seas and invade and indeed was travelling the wrong way - what better way to convince him to invade than revenge for his dead wife/child? This works for a setup both with and without fAegon.

I don't entirely agree with the assessment of Tywin's introduction - yes, knowing how things turn out, its significance is as described, but it would also fit very well, and conventionally, into the sort of straightforward good Starks vs bad Lannisters story that this season is posing as being.

Certainly it's significant that he is held back so long (by my reckoning, every other character of any importance appearing in this season is introduced by the end of episode 4), but that ostensibly fits neatly into a very standard template of holding back the appearance of the arch-villain, either to obscure their identity or simply to add gravitas when they do at last make their entrance. And Tywin's appearance here takes a classic form for that sort of delayed entrance, showing him chewing out a leading henchman, hitherto one of the two main faces of his faction, for incompetence in dealing with the 'hero'. It's pure You Only Live Twice, only with a dead stag instead of a live cat.

I think it's a very juicy point thematically as well. Tywin is the character defined by his total centrality in the society of Westeros, the one who doesn't have any traits of marginality whatsoever but is just 100% pure elite mainstream. I think only Robert comes close to matching him in that regard (maybe Mace Tyrell too, but I haven't seen him yet), and he's pushed a little off-centre by his conspicuous discomfort with the responsibility that comes with his power, whereas Tywin relishes it. And of course that demographic profile is backed up by his attitudes and personality, being the quintessential conservative aristocratic paterfamilias. It's hammered home even further by the repeated illustrations of his one great weakness, his blinkered refusal to take sufficiently seriously any threat coming from outside the world he knows or not endowed with the right credentials.

[Aside: funnily enough, he grasps the deficiencies of this sort of complacency in the abstract, without being able to apply that insight to himself. He sits in authority in the ruins of Harrenhall and expounds on how Harren's ostensibly well-founded confidence in the overwhelming conventional strength of his defences was negated by something beyond his ken, oblivious to any irony. He observes that Aegon "changed the rules", but never seriously imagines that anyone could change them on him.]

Yet although this positions him as the archetypal representative of the social status quo, his appearance is held back until after the original political order has begun to unravel. And when he does appear, he does so not in a setting redolent of established, stable authority and patrician grandeur, not at court or in his own seat at Casterly Rock, but in one signifying the start of that unravelling, under canvas with the first army mobilised for the coming wars. That points to the extent to which wars like this are not in themselves a challenge to the established order but a recurrent feature of it (though also potentially a structural weakness in the system, increasing its vulnerability to more fundamental threats). It's a statement that the established order is founded on violence, and that that foundation is never more than very shallowly and briefly covered up. The kind of upheaval now commencing just strips off the glossy pelt to expose the structure of muscle beneath.

The scene itself is actually a little ropey, though well-written and of course well-acted [performs formal genuflection to Charles Dance, trembling slightly], since it includes a classic bit of creaky exposition where a character has to have something which would be blindingly obvious to them explained, so that the audience can hear it. But as a piece in the structural set-up it's marvellous.

Yes, and the idea of forcing the issue that way, even with such a riskily unpredictable gamble, fits in with his argument to Illyrio that they have to move fast.

I mean yes to the logic of provocation - I don't think it's a safe move, as there's no way t be sure how Drogo will react.

Aye, the sort of move whilst being risky certainly would make sense with the way Daenerys is regarded at this time.

"Rather, the sins are on the part of the camera, which unerringly allies itself with these attitudes, moving the show from being set in a world that features disenfranchisement and objectification of women (but that leaves it as a valid object of critique) to one that enjoys being set in such a world."

Those are certainly the scenes that I didn't enjoy. Yes, I also would have appreciated them more in a way if the camera didn't revel in those moments, but the double objectification was at times very uncomfortable. This though did improve on later seasons as the number of these type of scenes gradually lessened.

Just listened to the commentary for Episode 4 and the writer there (can't recall his name) does mention the label 'sexposition' that such scenes were given, and whilst he says that it wasn't intended, he didn't reject it and seemed almost to take it as badge of honour.

Also, I am officially renaming this episode Ty-win or Tie-dye.

Yes I adore the delivery of the above quote by Charles Dance as he knocks his son flat with just a few words. Better than a sword.

Love the joke title, agreed, this is the new title.