A Brief Treatise on the Rules of Thrones 1.09 (Baelor) 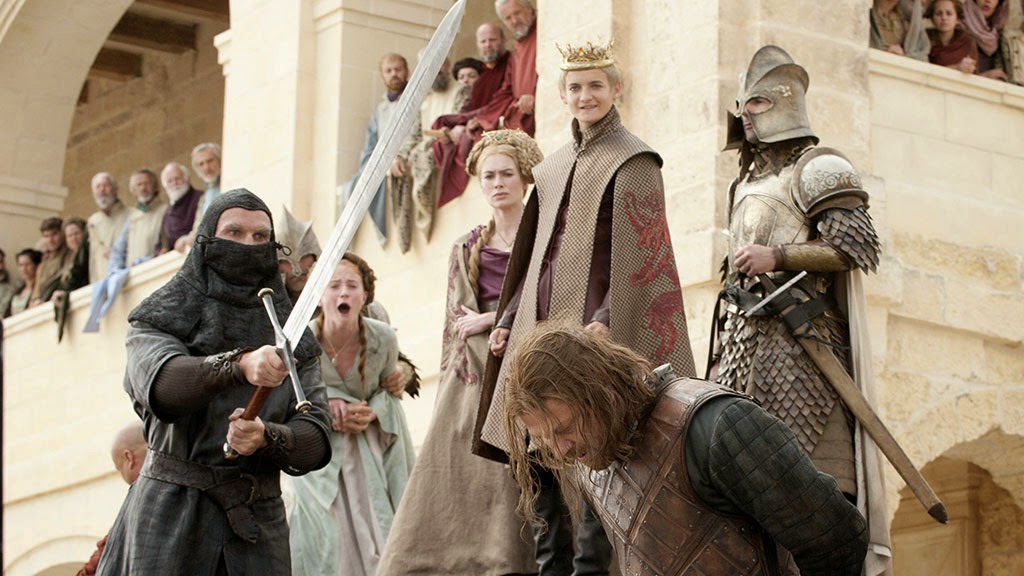 So is this what my niece means when she's talking about her "bae"?

"The transition is by hard cut, from Walder Frey to the elevator crank at Castle Black." A transition from one crank to another, surely?

GoT analysis makes me so happy, love to start out my week with these essays. :)

In terms of the structure of ASOIAF as a whole, I've always thought that Ned's death fits perfectly into the idea of the noble patriarchal figure whose death is "a means of passing an inheritance to a young figure for a coming of age story." The example that always comes to me is Leto Atreides in Dune, who dies at a similar point in a much shorter story. Note that a majority of the POV characters in the first book are his children - that's a pretty big sign.

The reason his death is unexpected is not because he's a noble patriarchal figure. I think there's three things going on. Firstly, I think Martin muddles up the generic expectations by creating this noir detective story around Ned. We expect Ned not to die not because noble paternal figures in high fantasy novels don't die, but because detectives in noirs don't die. Secondly, Martin's good at faking us out with teased plotlines that get cut off. All the business he's doing with one hand about sending Ned to the Wall totally makes sense, at least superficially, so we don't see the other hand with the sword to hack off Ned's head. And, finally, the story got totally out of control. The War of Five Kings plot that Ned's involved in isn't actually the main story. It was originally intended as a distraction from the main stories about dragons and Others, and to be done within a book. Martin just ended up much more interested in the distraction plot than he was in the "main" stories, so we ended up with Ned much more deeply enmeshed in the story than originally intended.

Here's my idea about the returns of the Baelor concept: killing the character who all the narrative structures of the story treat as the protagonist at the beginning. This made the later season finale Red Wedding suffer from diminishing returns. Yes, it was shocking for the season to end with such violence to so much of the main cast, but the cognitive reeling of Ned's death never truly followed. The shock was not at its existence, but more like its size.

Every tired old cliché began its existence as a brilliant innovation that had never been seen in art before. The death of a protagonist in a story like Game of Thrones (even in actual Game of Thrones storylines) will never have the same intensity of impact that Ned Stark's did. Because whenever someone sets up a character as a protagonist, establishes him as such according to both narrative structure and genre conventions for a significant portion of the story, and then kills him to destabilize the reader's expectations, we'll have a name for it. "Oh," we'll say. "She pulled a Ned Stark on us. Cool." Eventually, that exclamation will become a tired note of boredom, and we'll have to figure out some way to subvert it anew without returning to an even older convention of just making such a character the unproblematic protagonist.

Where the historical impact of Game of Thrones as an entity will have its longest legacy is coming up in the future. With the show projected to run for at least seven seasons, the Song of Ice and Fire story will end on television long before Martin will pump out the last book. So the television series will become the primary agent of narrative progress for the Ice and Fire story.

I know someone who angrily declared that they'll boycott Game of Thrones (both the books and the tv show) because of this. He considered it an insult to the book series. But this is only an insult if you think the only possible (or at least legitimate) book/television (or book/film) relationship is the adaptation of the literary product to the cinematic product. Game of Thrones will be the first instance I can think of where literary and cinematic expressions of the same narrative will become symbiotic, and shed any relations of priority for one or another medium.

Yes Adam, that's a great point about the symbiotic nature of the narrative forms of the books and the TV show here. It's one of the things I find fascinating about these works.

One of the many influences of Dune here, methinks.

Well, it's not as though killing off the person everyone thought was the protagonist is some sort of wildly new innovation that no one before Martin had ever thought of. It's a well-established storytelling technique. It even has its own Tropes page: http://tvtropes.org/pmwiki/pmwiki.php/Main/DecoyProtagonist

I still think the best example of this kind of death in TV was DCI Bilborough. But agreed that Ned Stark is top 10 - probably top 5.