A Brief Treatise on the Rules of Thrones 2.02: The Night Lands 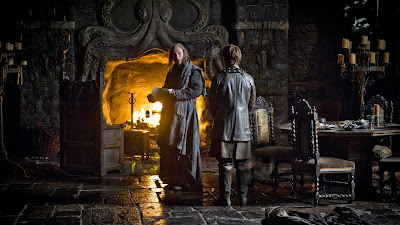 Slitting up Slynt is a good choice as the first real demonstration of Tyrion's not-Nedness, a comparison that gets made a lot this season, and makes his plot to a significant extent a commentary on Ned's plot - another of the ways in which Ned continues to hang over the story.

It shows that he's grasped the basic point that the very first order of business for a new regime, where the relevant institutions exist and political violence is to be expected, is to put people you can rely on in charge of metropolitan security (well, and the field army*, but his dad has that one covered). If Ned had had any idea at all of how to play the game, he would have had Jory Cassel sworn in as Commander of the City Watch before they had finished rubbing down his horse. Perhaps a little unlikely that he didn't, since as a soldier-type you would think the importance of muscle would be the aspect of the game he would grasp best (or least worst), but plot dictates.

Actually, if he had only got that one right, it's possible that he could have made all his other mistakes and still come out on top, or at least got enough warning that he'd been shafted to commandeer a boat to Dragonstone and get away with his head. Littlefinger could still have been able to buy off the Watch by suborning more junior officers, but that might have been tricky to do at such short notice, at least without anyone giving the game away, whereas Slynt was a discreet one-stop shop.

*I smiled at a news story this week about the new President of Nigeria, on the BBC website I think, which showed either a charming naivety or diplomatic disingenuous on the part of Our West Africa Correspondent. It reported that he had announced he would be making changes to the military high command, ostensibly to enhance efforts against Boko Haram, and expressed apparent surprise that this was being done despite the army having done rather well lately. Well, he's a former dictator who came to power last time through a military coup and went out the same way, and that's just two of several such coups in Nigeria since independence. Why do you think he wants his own appointees running the army?

I do enjoy that Tyrion kicked off Janos Slynt's downfall and then Jon Snow finished him off a few seasons (and books) later.

Perhaps a little unlikely that he didn't

Actually, the more I think about it, the more implausible it seems. He knows from the start that the shit is liable to get real at some point, and "the City Watch has 2,000 men under arms". It's as plain as the nose on your face (or off it, in some cases).

"“The Night Lands” suggests a shadow realm - something that exists just outside what might be called the board or the realm of play. And in a season defined in part by the gradual and inevitable resurgence of magic, this has non-trivial significance."

That's exactly how I had thought of this title, with it referencing and actual hidden and unspoken otherworldly realm, where the darker aspects of magic (whatever religious banner they fall under) hail from and penetrate into the book/TV show's world.

Yes if a military man like Ned was firing on all cylinders it would seem very unlikely. He did though seem to be often off kilter with regards to his instincts that then it appeared affected many of his choices - the main one being coming to Kings Landing at all perhaps.

"The fundamental problem with Theon as television rapidly emerges here: the toxic mixture of arrogance and cowardice that makes him an interesting force within the narrative also makes him almost viscerally unpleasant to actually spend time watching."

Yeah, honestly I found him quite unbearable to watch too. There was nothing redeeming I found in the character and the way he was written.

You know, it had somehow completely escaped my notice through all my rewatches that the shot Phil has used up there is blatantly a reference to the colours of House Greyjoy, as well as a visual reminder of how little distance warmth can spread in the miserable dampness of Pyke.

Having read the preview of the next post as well, I feel like saying "Don't hold back! Tell us what you really think of Theon!"

The funny and somewhat disturbing thing is that having always been revolted by him, I actually found myself warming to him a bit after the gut-wrenching child-murder, an effect that I suspect is intended. The blend of torment and humour in that scene with Luwin in the last episode of the season somehow conspires to induce you to root for him in spite of yourself.

In that way, I agree that it is creatively necessary for him to be the way he is. He could easily have been written as an ostensibly fairly nice but weak man, whose insecurities and moral cowardice lead him by stages into becoming a child-murderer, but if it was done that way your sympathy would simply withdraw from him as he got worse, in a unremarkable sort of way. Making him an obnoxious little scrote who treads that same path encourages this perverse effect where pity for the deepening hideousness of the situation he creates through his increasingly hideous conduct actually makes your sympathy for him increase, because you had virtually none to begin with. Which is more interesting. But yes, it does mean he's not great company.

And you a fellow cephalopod!

Yes, and that is an interesting effect. I agree with you about where it reaches its zenith as well. The dark comedy that is his final speech rallying his men is also fantastic, as is his scene with Yara in which he all but commits suicide. (Though that's mostly amazing for the line "you were a terrible baby, do you know that?")

Equally, the fact that the sight Alfie Allen's face on your television gradually acquires a visceral negative association is, I think, one of the biggest reasons why Unbowed, Unbent, Unbroken just doesn't work.

(But that's mostly a Brief Treatise 3.x issue, and there are no immediate plans for 3.x)

"But though 7B is madly gay,
It wouldn't do for every day.
We actually live at 7A:
In the house next door."

It's for that reason that I wasn't too impressed with the whole first season, and find it difficult to understand why so many people were surprised at Need getting his head chopped off.

I've not read the books, but the only thing which surprised me in the whole first season was when Jamie and Cersie a) were having an incestuous relationship, and b) pushed Bran out the window.

Once you've seen that, you think "O.K, it's that dark and ugly a world. Got it." So when Need continued to behave all first season like a naive boy scout, facing up against exactly the kind of people who push small boys out windows, well... what happened to him was less surprising than inevitable.

Theon Greyjoy has become my favourite character in Game of Thrones and started out as my most disliked. His story arc is probably the most Shakespearean... the angry boy with a misplaced identity eventually reduced into Reek. It's really powerful and Alfie Allen is great.

Yes, the combination of the sense that he is trapped and being herded inevitably towards his doom, with the fact that it's his own fundamental character flaws that actually put him in the trap and prevent him escaping, is pure Shakespearean tragedy.

(And there, you will be relieved to hear, my inspiration on this topic ended.)