A Brief Treatise on the Rules of Thrones 2.03: What is Dead May Never Die

Brought to you by my Patreon. Also, if you missed it yesterday, my interview with Vox Day is available. 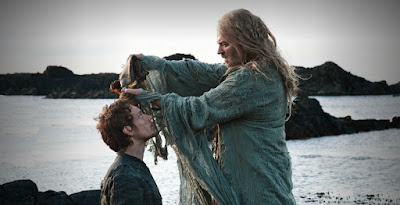 As you say, the "The Queen Mustn't Know" game is quite illusory, even in its own terms. It exists as a token demonstration of Tyrion being good at this political intrigue stuff, a way of consolidating that fact without letting him make any actual moves that would affect play in a concrete way.

In its specifics, the test is a bit sketchy (Varys's riddle doesn't hold up either). It doesn't prove a great deal regarding Varys's allegiances or discretion, since, as observed, he doesn't seem fooled by the story (I do like the eloquent flatness of his "Theon Greyjoy."). And of course, with Littlefinger it proves nothing whatsoever, because Tyrion gives him an overwhelmingly powerful incentive to keep his mouth shut and stay onside with the scheme.

But then, Tyrion doesn't need a test to find out whether he should get rid of Littlefinger, because he has ample reason to do that anyway. We know (as does Littlefinger) that he knows that Littlefinger in effect conspired to have him hit, and while he may not be sure whether Baelish is actually hostile to him or if that was just a means to some other end, it hardly matters - if you mean to stay in the game, you can't let people try it on like that and get away with it. Just as Tywin had to go to war with Cat's people, Tyrion has to do Littlefinger. And he is currently (for an uncertain but necessarily limited period of time) in a position to do so as easily as squashing an insect. And the great thing is, one of the many ways in which Baelish is unlike Ned Stark is that, while he's extremely dangerous alive, he'd be pretty harmless dead.

So political logic dictates beard on spike, pronto. But of course, we can't have that. So it's necessary to hide the fact that they're not doing the real thing by acting out a shadow-play of it. Pycelle is a sacrificial substitute, catching the ricochet from Littlefinger's plot armour. Luckily for him, it's just a flesh wound.

All of which, I think, reflects a wider incoherence between Littlefinger's "I'm not going to fight them, I'm going to fuck them" approach (and the practical circumstances that mandate it), and the provocative recklessness of his play. His survival depends on the enemies he inevitably makes being polite enough not to actually fight him, but just hang around waiting to get fucked.

Not quite: we know that Peter is acting alone, but there really isn't enough evidence in universe to justify this. You don't kill the catspaw until you know who the cat is. Tyrion could be waiting until he finds out who Peter's real masters are. By the time Tyroin finds out that he doesn't have one, Peter is far away.

But most of the likely backers are already known to be hostile, and absent from court, being either in open rebellion (Baratheons, Starks, Tyrells, Tullys), in exile plotting invasion (Targaryens), or in sullen, Lannister-hating seclusion (Martells, Arryns). None of them are lurking behind curtains in the King's Landing, in a position to respond suddenly and unexpectedly, and most or all of them will already be trying to do all the harm they can to the Lannister regime anyway. If Littlefinger is an agent for any of them, then he's surely their most powerful asset in the capital, and an extremely dangerous one, making his removal all the more urgent in a civil war situation. (I do like that little moment, never explained or followed up on, where he offers to betray the city to Renly. Of course, it works as a pretext for his presence in the camp, but knowing Littlefinger he's also perfectly serious. Why wouldn't he seize the opportunity to set himself up for that likely eventuality?) Perhaps the only uncertain case would be if he was working for the Martells, where eliminating him might interfere with Tyrion's charm offensive.

Broadly the same would apply if he's working for a foreign power - any harm likely to result from their losing such a highly-placed agent would almost certainly be outweighed by the harm they could do through him if he is left in place.

Any second-tier lord would be more of an ally than a boss, less likely to be the mastermind than the foxy Baelish, and less dangerous.

That leaves Cersei, but Tyrion already knows her to be hostile and can't get rid of her, so that the next best thing is to isolate her by getting rid of her most useful clients, as he does with Slynt and Pycelle.

This whole question of possible patrons also goes to my wider problems with Littlefinger as a credible proposition. Historically, such figures lived and died by the patronage of kings - they were generally hated by the elite at large, and when royal favour lapsed or became ineffective they were toast. Without a firmly-established king like Robert to protect him, a Littlefinger would be horribly exposed. For such people, order was a ladder, chaos was a snake. But then, I suppose the fact that he aspires not merely to run the country (perfectly achievable) but to sit on the actual throne virtually moves him into the fantasy column anyway.

And yes, I am thinking too much about this stuff.

Should have said "not merely to be the power behind the throne but to sit on it". Pesky right turn of phrase, never there when you want it.

I think the game was about more than just eliminating Cersei's patsies; it was about figuring out who could be trusted to behave predictably. Pycelle proved himself to be completely in Cersei's pocket, which means that he's always going to be working against Tyrion. Littlefinger proved himself to be straightforwardly greedy. That's a motivation that can be predicted and used. So he stays on board. And Varys proved himself completely and utterly loyal, and more to the point impressed.

"From this perspective Theon’s cowardice is not so much a character flaw as a sort of original sin; a decay implicit in their status as dead, drowned things.

It also serves as a sort of definitive statement on this initial phase of play; the point where magic’s haunting of the board becomes a near-explicit part of the text."

One of the elements I especially started really enjoying in the show (and the books) was watching the semi-hidden growth of magic in a skeptical world. The whole journey of Bran towards who he become I found gripping and touching.

The title and the words “What is Dead May Never Die” and the Greyjoy's thematic link with HP Lovecraft was one I had been slow to make, but it makes their characters a lot more interesting.