A Brief Treatise on the Rules of Thrones 2.04: Garden of Bones 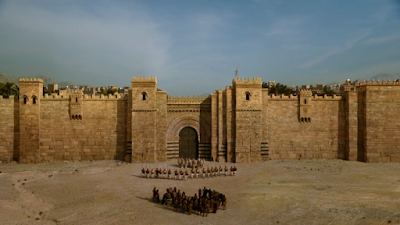 Ever since it occurred to me to think of the parley scene as "Gentleman" Renly and Stannis "The Terminator" Baratheon trash-talking at the weigh-in, I can't stop thinking of Davos as a tracksuited coach, with maybe a pair of boxing gloves slung around his neck instead of a bag of knucklebones. A training montage beckons. "Hearts on fi-re..."

Speaking of Davos's bones, is that line about how "You Westerosis, a man cuts your fingers off and you fall in love with him!" from the books, or is it a sardonic Benioff-Weiss comment on how the same thing happens to Davos and the Great Jon?

And speaking of Asshai, one of my favourite things about Winter is Coming is Roger Allam and Iain Glen pretty much competing to give the most melodious delivery of the words "the Shadow Lands beyond Asshai".

I just wanted to say that out loud, as it were.

I found the torture scenes with Ros and Daisy so uncomfortable that I couldn't watch them, and I am pretty sure that when I watch this episode again I will skip forwards on the DVD.

I just had such a visceral reaction against the images of bodily violence being portrayed in those scenes that I don't really feels any sympathy for them within the narrative of Joffrey’s terrible nature, as I already knew he was beyond awful.

Practicality is significant! For me I would always be cautious about the thought of magic being about exerting control.
essay writing service

Now the spambots have started repeating our words.

Anyone else getting a creepy Midnight feeling about this?

On the plus side, once they gain true intelligence they can troll John C Wright.

In a way it makes sense, if I recall correctly, in the books the torture of Sansa was more extreme/vivid. Since the actress, Sophie Turner, isn't old enough to have been stripped naked and humiliated on television I guess they decided to give that punishment, and some extra, to someone else.