A Brief Treatise on the Rules of Thrones 2.05: The Ghost of Harrenhal 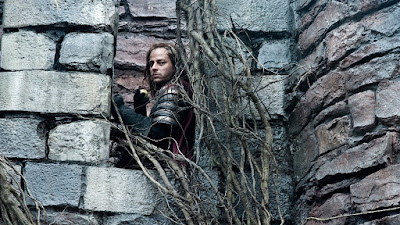 My husband had been watching the series and I'd been half-following it while doing other things. While the relentless horribleness of a lot of it still puts me off, it was the Arya-Tywin scenes that got me hooked (and I still am, despite everything). Never mind nudity (I can get that at home), violence (I'm happy not to) and special effects (even the ads do those), I'd watch an entire spin-off series of those two talking in a room.

despite the fact that R’hllor is part of a dualistic theology opposed to death, the Many-Faced God is pointedly not the other half

Yeah, that is messy, though diegetically it could make a kind of practical sense from the red people's side - given their seemingly rather assertive approach to people they don't approve of, if they decided the Faceless Men were basically a cult of devil-worshippers, might they not feel obliged to do something about it? And who would want to pick that fight? Better to studiously ignore them. The great thing about the White Walkers as a nemesis is that they're not supposed to be around any more.

What really confuses me is that Jaqen calls the entity with whom he's doing his carbon-offsetting "the Red God". Which would be Rhllor, no? So rather than horse-trading deaths with his own death-god, he's doing it with somebody else's nominally anti-death god (at least, anti-death in metaphysical principle - he seems quite keen on killing people in practice). Presumably it's due to the fact that they were going to die by fire, but it still seems odd. And given that the Many-Faced God remains so long unmentioned, I was left with the impression that Jaqen and Melisandre adhered to the same religion, which I imagine was not an unusual assumption. Which obviously removes any sense of dualism from the proceedings. All very muddled.

Speaking of dualism, do you have any plans to touch on Manichaeism in the LWiA? Obviously the War is a dualistic conceit in itself, and as a prophet-painter (whose oddly literal theology of light and darkness has been linked to his visual imagination) and the single-handed inventor of an elaborate mythology, Mani seems to offer some interesting resonances with Blake and the principals. Though I realise lack of source material might be rather a problem, as none of his pictures (or even copies of them) survive.

There is something brilliantly apt about the particular type of magic that first intrudes into the centre to make very drastic alterations to the material political game of the mainstream, in that (though we only learn this next season) it relies on royal blood.

That is to say, it draws its power from something that is a source of immense power in the political world, and more particularly from the political power-source that is by its nature the most "magical", the thing that, for all the pragmatic sense the hereditary principle makes, is hardest to justify objectively as part of a rational way of running the world, the thing most dependent on mystique. That, one might say, makes it the political world's most vulnerable point, where its material reality is most susceptible to the intrusion of a more literal kind of magic.

And the specifics of it draw out the analogy further, in its mechanisms (the fundamental role of royal procreation and the fact (revealed next season) that royal blood is not only a source of power but something it can be extremely dangerous to have in your veins), and in its impact (the fact that one man's death can so totally transform the political landscape, and not for incidental right-place-right-time reasons but because his birth makes him a fundamental fact of that landscape).

And by making the magic literal, it draws attention to the genuine oddity of the material reality from an off-kilter angle.

It's a great move. Shame it means we didn't get more Renly though.

I remember when I was watching this episode for the first time, I definitely thought that that Jaqen was another agent of the same deity that Melisandre worshipped - simply because the colour red was used as the main identifier. I hadn't read the books at the time, so I'm not sure it it was made any more clear there.

Maybe this was a misdirection, to make us wonder who was worshipping which deity?

One the things I really love about the Harrenhal episodes is the set of Harrenhal itself. It has such a creepy, broken presence and feels almost alive and as strong a character as everyone who inhabits it -it feels, as the camera moves through almost like like we're seeing the the decaying interior of one of the great dragons.

"That, one might say, makes it the political world's most vulnerable point, where its material reality is most susceptible to the intrusion of a more literal kind of magic."

I like this thought very much. In fact blood magic is seen in many ways throughout the show isn't it? We have Melisandre's shadow, the funeral Pyre of Kahl Drogo, and probably other examples.

I do as you say, like how the whole structure of royalty is in effect made vulnerable by the existence of this kind of magic.

That actually reminds me, I was thinking the other day of people's reactions to Stannis sacrificing his daughter. I suppose he was shown to us as from the beginning making terrible choices, as early on here he killed his own brother using blood magic. Probably his choice shocks us again in this season as we have on occasion gotten closer to him and he was appearing more humanised.