A Brief Treatise on the Rules of Thrones 2.07: A Man Without Honor 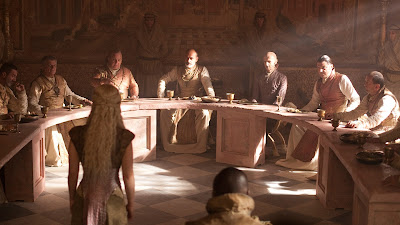 I'm not entirely sure if the fifth is a hard cut. It reads like it's a cut by mirror image from a man who is scarred by fire to a woman unharmed by it.

Quick question not directly relevant to this post as such (I just thought it would be most likely to get your attention as a comment on a fairly new post). When is the Super Nintendo Project continuing?

Soon as this run of Brief Treatise finishes with 2.10.

Right, of course. I had temporarily forgotten they were occupying the same "slot" in your blogging schedule. (Though at least that means my question was closer to being on-topic than I gave it credit for!)

I know it's been said loads before, but I do utterly adore the double act of Arya and Tywin.

I'm itching to get back to it. It's possible I'll end up disappointed with the result, but the "Lemmings" post in my head is fucking awesome. :)

The Kingslayer, Ser Jaime Lannister. Whatever else he is, the man's still a knight.

For me, this is the episode where his characterisation gets irretrievably screwed. The murder of Alton, and more definitively the manner of it, the totally convincing appearance of slightly condescending kindness abruptly giving way to killing-with-a-quip, unequivocally establishes him as a stone-cold psychopath. Only by pretending it didn't happen (which I suppose from the book-supremacist point of view it didn't) can you take seriously the subsequent not-such-a-bad-old-stick schtick. His critiques of the honour system, however inherently convincing they might be, end up in the moral-censure-from-Davros category.

That pretence would be easier if it had been an isolated incident, but it's very much of a piece with the attempted murder of Brandon. It's even more true there that the manner of the deed cuts deeper than the basic fact of it, given that on that occasion he had such overwhelming cause to do what he did from a pragmatic point of view. His ruthlessness there would not be an insurmountable barrier to giving him moral credit for other things, but getting past his nonchalance would be a big ask. Taking the two events together, I can't help but feel that those crafting the character are hopelessly adrift.

And I haven't even seen That Scene yet.

I'm unbothered by it, actually. He's a captive. His duty is to escape. He does so, sacrificing a basically useless man in the process. What I quite like about the scene, though, is that I am inclined to read it as being entirely honest and sincere in his reminiscing about old battles.

I mean, yes, he is a stone cold psychopath, but I watch Hannibal; that's hardly a barrier.

I just started watching the show two days ago, and I believe it was this episode where the trick of Jaime Lannister, as a character, suddenly came into crystal clear focus for me. I'd already picked up, back around the time he said he always won fights because he was good at picking opponents, on the fact that he's superficially the tall, handsome prince charming that this program's eager to subvert and reveal as the scheming, villainous, vain beast we always expect the jocks to be. In other words, I'm pretty sure the same character appeared in one of the Shrek movies.
But in this episode, with all his quipping back and forth, it suddenly struck me exactly what he was and why he worked: Every loathsome quality he brings to bear is the same quality we would exhort in the hero of any other story. I've played as and played alongside Jaime Lannister in dozens of D&D campaigns. Take away his skill in combat and he's most of the Doctors, give it back and he makes up the difference. Were it not for, y'know, the child murder and the incest he'd be any number of modern action fantasy heroes, and if you leave those two in he's any number of classical action fantasy heroes. He mocks his jailers, he's inspirationally disadvantaged but in a socially acceptable way, he's got a mutual disdain for his father that's tempered by a grudging mutual respect. He's Luke if the Skywalkers never broke up, he's Robin Hood without his Merry Men. Once I picked up on it, it suddenly recast his entire character through the first season.

Having watched further, I should add that I came to the above conclusion before he got his hand cut off.