A Brief Treatise on the Rules of Thrones 2.09: Blackwater 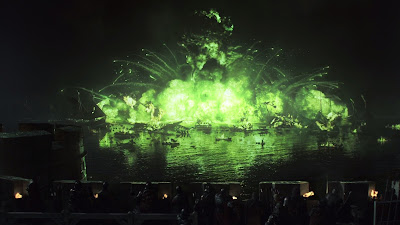 Really enjoying these Treatises... thanks. Looking forward to following them all the way through. Not looking forward to you taking a break. The wife and I have only just started watching GoT and are binging seasons; about to start series 3 and were enjoying your write-ups after each episode.

'Blackwater' was, for me, the moment I surrendered to the Game and decided I was in it to the end, despite the gratuitous violence and tits-n-ass hooks in previous seasons. The wife was on board from episode one!

Question for you Phil; is there a 'Brief Treatise' book in the offing at the end of it all?

I thought that the scenes in the holdfast with Cersei and Sansa were stunningly acted. The portrayal of Cersei in those secenes was pretty gripping.

As above, really enjoying the Treatises - cheers Phil!

I know that you are often not getting many comments here, but great writing and enjoying following the show again with your posts.

One thing that's made a lot more prominent by the single setting is the use of musical themes to tag particular sequences - I mean, to the point where it's obvious to me, someone who tends to be oblivious to such things, except when it's really hammered home, as in "Ah, Melisandre's on screen, so here comes the spooky Melisandre music, because it always does". It's extremely apparent that we're chopping back and forth between the usual Stannis theme (which in general seems to me like the most conspicuous and consistently used character theme after Melisandre's, though I'm ready to be corrected by those who actually have an ear for these things) and another tune for the Lannister side, as the fighting sways this way and that.

Notable, though, having been introduced earlier in the episode, that they don't generally use The Rains of Castamere for the Lannister music. That's used sparingly, with a quick sting of it at the climax of Tyrion's speech, before it comes in when the cavalry arrive and then plays in full over the credits. It's the musical big gun of the series, and you wouldn't want to wear it out.

Speaking of which, I like how it's handled the next time it supplies the closing music, where its appearance signifies the return of Jaime's mojo. I'm sure I'm over-interpreting, but I like how it doesn't play when he decides to go back, nor when he does his action-heroics, nor when he faces down his enemy, but when, on the point of departing as grim-faced as he has been for the last few episodes, his mischief suddenly kindles and he pauses to drop in a sardonic quip - cue the Rains! Because quintessential Lannister badassery is reckoned not in martial skill or cunning or strength of character, but in the forging of cutting remarks.

"You're perfect, aren't you?". Yeah, the Cersei stuff is marvellous.

And yes, obviously I have also been enjoying these posts (as well as, more visibly, enjoying the sound of my own voice). It is a disappointment that there hasn't been more discussion though. Maybe people have found the deliberately austere approach offputting. I don't know.

It's interesting that in a climax representing, as Phil said last week, "the inevitable collision between Stannis’s magic and Tyrion’s gamesmanship", it's established well in advance that the relative strength of those two fundamental forces is not actually going to be tested in a way that would make it possible to declare a winner between them. Stannis has abjured direct magical aid by taking Davos's advice to keep Melisandre away, while Tyrion's schemes depend on wildfire, which, though this isn't spelled out (boom boom!) in the series, is partly magical in nature. So the alignment between these contenders and the powers they generally represent is muddied, meaning that whoever wins the battle it will not be a clear victory for one principle or the other.

I suppose it makes sense to deny a clear resolution of such a clash at this early stage in the story, though it may also (along with the fact that its actually being an early stage of the story results from the elongation of the original plan), say something about Martin's tendency to endless deferment.

That was a great line from Cersei. I could watch those scenes again and again.

Yes I've missed more discussion happening too, not sure why folk have been less attracted to chat, I personally like the style. One of the highlights was this post's State of Play where the section below cracked me up as I heard it in the voice of a highly strung sports reporter:

I'll have to go back and have a good listen to pick up the cues you mention. One of the musical things I have enjoyed also are the various iterations of the title theme tune at the end credits on occasion.

Aye, the battle between Stannis and Tyrion is kind of muddied as far as magic Vs strategy goes. It seems at this point that each side is mostly trying not to use magic but having their hand forced to do so - I wonder what Melisandre would have pulled out of the bag at Blackwater and how that would have fared against the Wildfire?

I think that the pre-release to Patreon backers might be the problem:

We see the post a few days before, have interesting thoughts but no immediate outlet, so we let it go, and by the time that the actual post rolls round have forgotten/recanted our views.

Indeed - we have no way of knowing whether her insistence that they would have won if she had been there is well-founded, or for that matter how far she believes it herself.

Mind you, if only someone had come up with a kind of magic that could weaponise sarcasm, that thousand-year Lannister dynasty really would be a realistic prospect...

Mmm, that often seems to be the case with Melisandre, her insisting that her visions and path are the correct one - and it's not always the case, as borne out in the recent finale.

I think the preview is fine, as I have a little skim then, but come to the main article here for a deep read as I like to share thoughts with folk here.

I recant nothing, no matter how much you tickle me.

I would suggest the reason for the less lively discussion is that Game of Thrones is a relatively recent phenomenon that is, for the most part, consistently written, directed and acted to an above average standard. Game of Thrones is also a single ongoing story in which the setting and rules have already been, again, for the most part, defined and the show plays out according to those rules. Phil's commentary on the episodes is therefore far less likely to be controversial or challenge deeply held beliefs.

What it doesn't have are the legions of rabid followers and fanatics that Doctor Who has accumulated across its five decades of existence; with wildly varied and deep held opinions on what Doctor Who should be, what it isn't and what could be if only they were in charge... or Terrance Dicks was the head writer.... or Phillip Hinchcliff produced.... or if David Tenant returned... or RTD had never been born...

These are posts from Phil that we can simply enjoy for what they are; well written and thoughtful insights into a very well produced TV series we all like to watch.

A seditious thought occurs: am I imagining things, or is it the case that, as the fleet cruises into the bay, the drums strike up and the men hasten to battle stations, the corners of Stannis's mouth can be observe to turn slightly upwards?