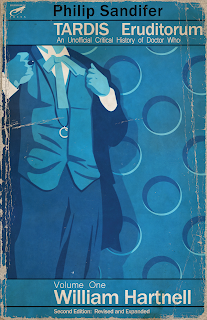 Slightly later than initially predicted, the revised and expanded version of the first TARDIS Eruditorum book, covering the William Hartnell era, is available for purchase.

If you bought a copy of the book via the Kickstarter, the wheels are already turning. If you have an unsigned copy, I will be shipping it directly from the print on demand company to you. If you have a signed copy, it'll be a bit slower, as I have to ship to me and then to you. Details are in a Kickstarter update I sent out last night.

If you have not already bought a copy, you can do so here.

US Kindle, US Print
UK Kindle, UK Print
Smashwords (For ereaders other than Kindle)

All editions and formats give me the same royalty, so feel free to pick whatever format is most convenient or likeable for you. It should be showing up in the Barnes and Noble and Apple stores shortly.

If you already have the first edition, here's the case for why you might want the second. For one thing, it actually has essays on every single Hartnell story now, instead of missing The Massacre. Plus, it's no longer riddled with typos, and the already quite good cover art has been replaced by another faux-period masterpiece by James Taylor, who describes his process here, meaning this volume matches the other ones. Or, actually, it doesn't match them at all, but fails to match them in complex and aesthetically pleasing ways.

Plus there's new content. Lots of new content. The essay on Galaxy Four has, as you might expect, been totally rewritten to address the fact that some of it exists now. Plus there are eleven brand-new essays exclusive to this volume, in fact. You'll get:
Plus an all-new section called Coda: Before the Beginning, looking at stories set before An Unearthly Child. This section contains two essays from the first edition alongside looks at Marc Platt's Auld Mortality, Nigel Robinson's Hunters of Earth, Rob Shearman's Deadline, the unaired pilot episode of Doctor Who, and Mark Gatiss's An Adventure in Space and Time. Plus there's a bonus essay on the Second Doctor novella Wonderland.
Speaking of the Second Doctor, and addressing the question that comes up periodically about what I'll do if missing episodes come out, the answer is nothing for now - I'll not do a new edition of this or the Troughton book until I've got all the other Eruditorum books out. If there are new finds that warrant an update of either book, I'll put those out then. (Right now, neither Enemy of the World nor Web of Fear seem to me to necessitate updating the Troughton book - I think I got both of those right based on the reconstructions.) So you can buy with a guarantee that this will be the final version of this book until at least 2017.
As always, thank you for your support. These books are my job, and your buying them keeps the blog running and makes sure that new ones keep coming out.
I'm expecting the second half of the Tom Baker era and the Peter Davison/Colin Baker eras (as one book) to come out in 2014, probably in summer and fall respectively. The Logopolis book will also be out in there, probably around the same time as the second Tom Baker book.
Share on Twitter Share on Facebook

Bought - via Amazon Australia - looking forward to the new essays!

Really looking forwards to it! As per request, have emailed you as reminder for getting book shipped. Cheers.

I'm looking forward to getting my shipment! It's one thing reading this on a screen (which I am warming up to thanks to my morning bus commute) but it's a whole other thing to have a book you can hold in your hand and flip through.

Any way of replying to the backer update if Kickstarter has been failing, for three months now, to issue a password reset?

So... what about those of us who got ebooks through the Kickstarter?

Check the updates - you'll find, two or maybe three updates ago, the update where I gave all the Kickstarter backers the download code for their ebooks.

Probably not. Send me an e-mail - snowspinner at gmail.

So you did, nearly a month ago and I completely missed it. Sorry!

Wow, what a interesting look at here concerning the new publishing book. Which is very difference and enjoyable one look to me. I hope such kind of some concept help us a lot to read more books.visit here for more info college paper writing service