The patronizing use of Welsh stereotypes in 'The Green Death' is evidence of the employment of centuries-old imperial condecenscion.  However, Welshness alone does not straightforwardly equal idiocy in this story.  Rather, it is the conjunction of Welshness with membership of the proletariat which produces characters who don't really have a clue what's going and need everything explained to them.

Clifford Jones and 'Nancy' (note how she doesn't need a surname) are allowed to be efficient and useful only because their Welshness (which entails them using cute provincialisms galore) is offset by their educated, middle-class boffinity and right-onitude.  Meanwhile, Jo marvels openly at her own foolishness in caring so much about the death of a "funny little Welshman" (who kept her alive).  The difference between these Welsh characters - i.e. between the ones who qualify as people and those who don't - is down to class.

The workers in this story are belittled, peripheral figures.  They are profoundly out of touch and their Welshness is but a conduit by which they can be further quaintified.  They miss the big picture, even when the hippy scientists try to explain everything to them. They side with Stevens when he tries to bribe them with promises of the trickle-down effect... indeed, the validity of Stevens's claims that profits for Global will also mean prosperity for the workers is never challenged, only qualified by the criticism that pollution will be a side-effect.  There is hardly a hint of class struggle here, besides the opening scene... and even here the struggle is portrayed as over.  The mine is closed, the miners all but absent.  Their status seems unclear... some of them seem to still have access to the mine despite its apparent closure.  The mine itself seems not to be owned by the government but by Global Chemicals.

Now, in its haphazard and accidental way, some of this is actually prescient.  The UNIT stories were supposed to be 'five minutes into the future' (we're not getting into UNIT dating controversies - I couldn't care less) and, of course, by the late-90s, British mining - together with so much manufacturing industry - had been deliberately destroyed by the Tories.  Huge numbers of traditional working class jobs had been annihilated.  Working class communities were wrecked in the process.  In many ways, the sight of a crowd of workers, made redundant, closed out of their sold-off and shut-down workplace, listening to speeches about how coal is dead, being fraudulently told that their future lies in the trickle-down effect of private profit, is a sight that predicts the result of Thatcherism (which, of course, had already begun under Heath, albeit in a less aggressive form).

Thing is, viewed in the context of the times in which it was made, this is as puzzlingly skewiff as it is prescient.  'Anachronistic' is the only way to properly describe it.

You see... miners were powerful in 1973, having struck in 1972 for the first time since the 20s - and won!  Miners all over the country came out over piffling proposed pay rises, proposed by the Tory government in the midst of declining living standards and working conditions.  Miners in South Wales made a particularly good showing in the nationwide strike.  135 pits were shut down by industrial action in South Wales alone (the national total was 285), with dockers in Cardiff and Newport refusing to unload imported coal from ships in solidarity.  Miners picketed power stations of all kinds and shut down transport of fuel supplies.  Welsh miners joined a picket outside the Saltley works in Brimingham, which had been undermining the strike by continuing to send out coke.  The miners alone were unable to force the gates of the depot to close, so Arthur Scargill - the trade unionist and activist leading the picketing - appealed for help to the shop stewards of the huge engineering industries in Birmingham.  At least thirty thousand workers walked out of factories in the Birmingham area, with at least a third marching to help the miners at Saltley.


In one of the greatest working class victories of the post-war period (the 40th anniversary has just been celebrated), thousands of workers forced police to close the gates of the depot.  A rattled Tory administration instituted a 'state of emergency' and a three day week in an effort to conserve energy supplies.  The miners returned to work, after much negotiation and a ballot, as the highest paid industrial workers in the country - and the strongest and most unified.  Their achievements were chipped-away in the context of the Middle East oil crisis and soon their pay began to slip back down the scale, so they struck again in 1974.  This time, hapless Heath called a general election and appealed to the country to decide: who runs Britain, the miners or the Tory government?  The country made its choice and the Tories were booted from office, to seethe and fester over their resounding defeat at the hands of the unionized and militant miners.

(It's worth noting that the current state of affairs I described earlier - with the British mining industry, like so many other manufacturing industries, lying in wrecked ruins alongside the devastated working class communities that revolved around it - came about as a result of the policies of the Thatcher government.  Thatcher - recently portrayed as an inspirational force for change in that movie - came to power in 1979, sworn to inflict ruinous vengeance upon the miners for daring to bring down Heath.  Her gang of class-warriors were, as Arthur Scargill rightly asserted, planning to shut down pit after pit, thus punishing and breaking the most militant and class conscious section of the British working class.  The Tories made it necessary and unavoidable for the miners to fight to protect their livelihoods and communities.  Meanwhile, they (the Tories) plotted and schemed to ensure that they could hold out against the strike they were deliberately provoking.  Scargill - a courageous and incorruptible fighter for the working class, whatever his flaws - was not the cause of the miners' defeat in 1984-5.  Indeed, he is to be credited with bringing the strike closer to victory than anyone could have expected, given the level of government premeditation, preparation, conspiracy, dishonesty, violence and spite.  Crushing defeat though it eventually was, the great miner's strike of 1984-5 is also a heroic page in working class history... and the dire results of government victory would have happened anyway, even if there'd been no Scargill and no strike.  The only difference would have been that, had the miners acquiesced without a struggle, the subsequent demoralization would have been even worse and would have left the working class with no inspiring memory of resistance.  Just thought I'd mention all this.)

'The Green Death' was broadcast almost right smack inbetween the two massive and inspiring demonstrations of working class power by the miners in 1972 and 1974.  It was aired at a time when the miners were by far the most advanced and powerful section of the British working class.  And yet, the story depicts miners as sacked, powerless, disunited, grumbling, incompetent, reactionary yokels in the background, to be patronized at best.  They play no part in resolving the issues or jeopardy in the story.  Indeed, they just get in the way.  The only political demo or march in the story is the one organized and attended by the nice, middle-class, hippy boffins. 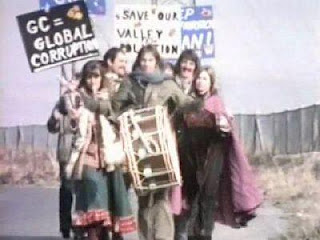 The workers don't demonstrate, they just stand around outside the gates and grumble before they disperse back to the pub.  They are implied to be politically shortsighted and selfish.  They don't notice or care much about the environmental destruction, which is implicitly assumed to be a more important problem than their jobs and lives and livings. They are gormless, horny-handed, provincial nincompoops.  Some are nice enough but others are openly depicted as rash and violent or nosey and insinuating.  The Doctor openly becomes an authority figure when ordering flat-cap-wearing miners around (who need him to tell them how to operate the machinery in their own workplace).  Moreover, the Doctor twice assumes disguises in which he plays at being comedy working-class stereotypes. 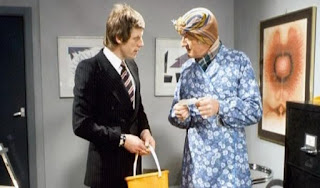 The working class identity becomes a shell of parody, cliche and ridicule, to be used by the plummy scientist hero before being thrown off.


By contrast, all the suited businessmen inside Global - including Stevens, the main human villain - get to have their moments of conscience or indecision or remorse or redemption.  No working class character gets anything like that much flesh on their bones.  The death of Fell is implicitly meant to be more of a big deal than the deaths of either of the miners.  Indeed, even inside Global Chemicals, the workers continue to be depicted as less human than the corporate suits.  While Stevens is shown to be conflicted, his driver/henchman is just a glib, brutal thug.

In its terribly liberal-moralistic way, this attempt at an angry, political story misses the chance to engage with what unscrupulous businesses do to ordinary, working people, and also misses a chance to depict those people as a force for change.  It completely fails to notice that miners in South Wales are, at the time the story was written, powerful and successful fighters for their own interests and the interests of their class.  More, it largely misses the chance to depict working people as fully human. Share on Twitter Share on Facebook

"This time, hapless Heath called a general election and appealed to the country to decide: who runs Britain, the miners or the Tory government? The country made its choice and the Tories were booted from office, to seethe and fester over their resounding defeat at the hands of the unionized and militant miners."

The general election to which you are referring actually produced a hung parliament in which the Conservatives polled a plurality of the popular vote. Even after the October election they were less than 4 points behind Labour.