Berberian Sound Studio is a study of male fear and hatred of women.

The horror movie that we hear (never see) being made is about the undead revenge of women who were tortured and killed as witches.  The slimey director spouts pretentious bullshit about how his film is an important social document, intended to honestly portray and condemn the abuse of such women, to recognise their suffering, etc... yet his film rests upon the assumption that the women who were accused of witchcraft were, in fact, witches.  Otherwise, how could they come back from the dead in satanic rituals?

The torture - involving, at one crucial point, a red hot poker being inserted into a woman's vagina - is shown lovingly on screen... though, as I say, we (that is, the viewers of Berberian Sound Studio) don't see it.  Gilderoy sees it though.  He sees it again and again and again.  He has to wait until the crucial moment to come round on a loop so he can drop fat into a frypan, thus creating the appropriate sizzling sound.  He has to rip the stalks from radishes to simulate the sound of hanks of hair being ripped from women's scalps by the priests.  The film is comic in the way it shows the sound studio repeatedly ringing with the sounds of the hammering, stabbing and general abuse of various vegetables... yet, the comedy decays as we see the mangled fruit and veg decaying in buckets. 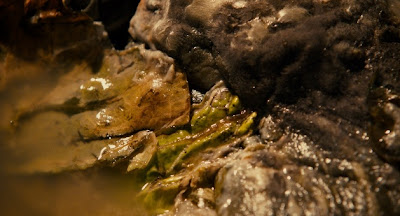 Like the tomato soup that gets splattered all over Gilderoy's face as he uses a blender to simulate the sound of a woman being carved up with a chainsaw, the rotting cabbages and melons make us think of mutilated human flesh, dehumanized by abuse and then dumped like rubbish.  Gilderoy, who spends his normal working life in the UK making gentle documentaries about nature rambling, has never imagined such horrors.

In the studio he is surrounded by women who are working for the men in charge of the picture.  It is quite disconcerting to see the women co-operating (if reluctantly, in the probably vain hope of being paid one day) in the production of such a blatantly misogynistic film.  The men, needless to say, are unconscious of any such irony... with the possible exception of Gilderoy, who never manages to raise much resistance despite his qualms.  The only woman who seemed uncowed by the relentless male dominance in the studio is the surly secretary Elena, whose legs and bum Gilderoy furtively stares at when following her down a corridor.  Part of his transformation is when he learns to be rude and dismissive towards her.

Silvia (one of the voice actresses dubbing the dialogue, hired for her ability to scream) is being sexually harassed by the same director who claims to be making an important meditation on the victims of witchcraft trials.  At one point, she sarcastically equates his wandering hands with the hands of the inquisitors that searched for witches' marks.  She says she is marked.  He has made her feel that way.  The producer harasses her too, bullying her for more realistically terrified screams, ignoring her thoughts on characterisation, putting her down with savage rudeness, suggesting that she gets jobs by performing sexual favours for casting directors, etc.  When she is performing in the sound booth, the producer sneers that one of her screams sounds more like she's faking an orgasm.  He disapproves of his Director 'directing with his dick', but he clearly also blames the women who have to suffer his attentions.  He evidently senses that she's trouble, that she may well refuse to accept more harassment and thus cause them trouble, because at one point he tells Gilderoy that "there's poison in those tits". 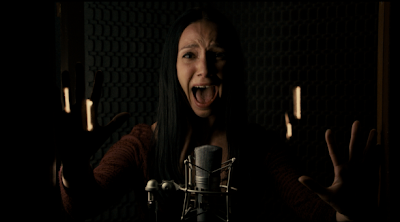 Silvia confides to Gilderoy that she has been used and cheapened, made to feel like a whore.  It is implied that she may have been coerced into sex, though she may be talking metaphorically about the way working on the film has made her feel.  (It is also possible that the conversation is a dream of Gilderoy's, since it seems sexually charged in an unlikely way.)  In any case, Silvia rebels and erases the tapes of her own performance before disappearing.  Another actress is hired on the strength of her looks, after the producer and director skip through a series of photographs of applicants (front and side views, so they can judge the women's bodies... despite the fact that they're hiring a voice actress who will not be seen) and see one actress that, according to the director, "would give a dog a hard-on".  The actress, however, proves unable to provide satisfying screams.  The producer tells Gilderoy to go and get her ready by making her cry.  In a moment that represents his tipping point, Gilderoy succumbs to the order/temptation to torture the woman, in a passive and technical way entirely in keeping with his repressed and nerdy character, by sending increasingly loud feedback into her headphones.  Under orders, he turns up the volume, despite her cries.  It's reminiscent of that experiment where, under the comforting impression that scientists (complete with authoritative white coats) were giving them orders, students happily administered electric shocks (as they thought) to other test subjects.  But this isn't just about the brutalising effect of authority upon a compliant subordinate, this is specifically about the exercise of male power over a woman reduced to material.

The whole film is about the men reducing women to bits and pieces.  They are made into their voices, spouting lines written by men.  Their bodies are cut into pieces on the screen, to the bored professionalism of the producer and the salivating delectation of another sound engineer.  Those female bodies, represented in the sound studio, become melons and radishes and cabbages, stabbed and hammered, rotting in a bin.

There are other potentials.  At one point, Gilderoy entrances Silvia by showing her how he can transform her voice... but the moment is immediately squashed by the intrusion of the filmmaking process.  There's another scene when, during a power cut, he reduces the entire company - men and women alike - to gasps of wonder when he makes a light bulb emit the sounds of a UFO.  At home, Gilderoy uses this trick for "children's programmes".  (I can't help thinking about those eccentric geniuses at the BBC Radiophonic Workshop here... especially since the film is obviously set in the 60s or early 70s.)  Again, the moment is sadly curtailed once the lights come back on.  The commercial imperatives of the work make the prolongation of such a magic moment impossible.  The lights come up and the director snaps back to business.

Ultimately, Gilderoy's sympathies with the women - which he, in his passive way, can only express via troubled frowns and quiet communications when the other men aren't looking - come to nothing.  His nightmarish internalisation of the film entails a woman sneaking up on him the darkness of his own bedroom and attacking him, whereupon he overpowers and dismembers her.  He literally takes on the persona of the violent man, suppressing the vengeful woman, whose antics so shocked him when he first saw a clip of the film.  His guiltly co-operation in the exploitation of female bodies and voices has brought him to internalise the terror of female revenge and the fascination with the idea of violent suppression, with the reduction of the female menace via violence.  This, of course, is the whole meaning of the film he's been helping to make... the abused witch/woman returns for revenge (as did Silvia) and this is a terrifying threat that must be put down.

The female scream echoes through the film and through Gilderoy's mind, waking and sleeping... but the effect of this is not ultimately to engender sympathy, or a refusal to co-operate in the film.  Rather the scream becomes Gilderoy's own scream, confronted by women.  He says, early in the film, that he's "never worked on a film like this before".  Does he mean a film that involves being surrounded by women?  Has he ever been in a recording studio filled with young actresses when dubbing those nature films and kid's sci-fi programmes?  It's strongly implied that he's an unmarried virgin who lives with his Mum.  Repeatedly, members of the Italian production team more-or-less force him to consume articles of the fruit that has come to symbolise female flesh.  This is also an echo of the primal temptation, of course, but with woman made the fruit itself rather than the tempter. 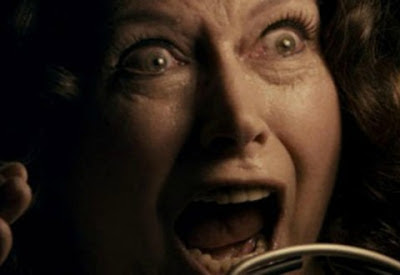 There's a very good review of Berberian Sound Studio here, by my old buddy Simon Kinnear... who is a proper cineaste and who can therefore actually say something intelligent about the film as cinematic art.  Unlike me. Share on Twitter Share on Facebook