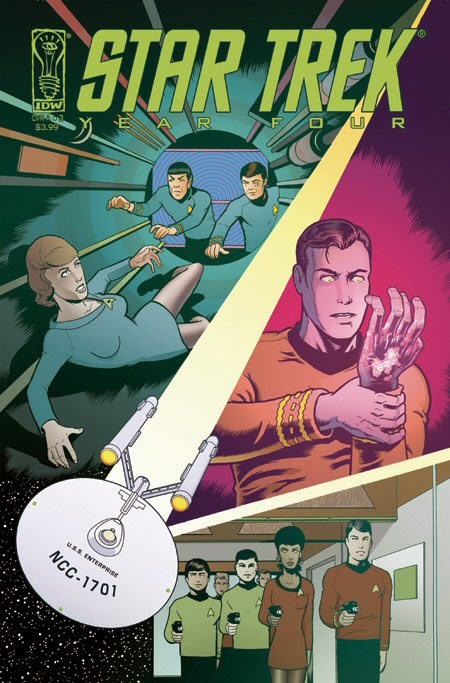 There's reconstructionist, there's nostalgic, and then there's just plain retrograde. Guess which one we're talking about this time.

While investigating the sudden radio silence from colony PH-11, the Enterprise landing party discovers every human inhabitant dead. However before they died, Spock points out the colonists had discovered an alien pod and Chekov notes their communication room had been destroyed before they went as well. Back on the ship, McCoy examines one of the deceased colonists and reveals he died of severe head trauma, as if his brain had been bombarded with too much information to process at one time. Kirk is called to the bridge, but discovers the ship has changed course as per an order everyone claims he gave, but he did not. Spock summons security to the bridge, claiming Kirk has been infected with a virus found on the planet, and has him arrested and brought to sickbay.

As he restrains Kirk to the operating table, McCoy orders Nurse Chapel to sedate Kirk, but, secretly agreeing with the captain, she slips him a scalpel instead. There's then a brief fight scene as Kirk and Chapel try to regain control of the Enterprise, but it doesn't last long and eventually they too become afflicted as it's revealed the “virus” is actually a colony organism called the Ur who just wanted to return to their home planet, for some reason needed humanoid hosts in order to do this and would rather posses an entire starship than try to actually reach out and communicate with anybody first. Meanwhile, any hope we might have had to see some feminist redemption following on the heels of “Turnabout Intruder” by having Nurse Chapel save the day from a menacing alien invasion are swiftly dashed by teasing us with what could have been her defining character moment on the entire series and then shunting her back offstage the moment she starts to exhibit too much agency.

Yikes. This one isn't quite Margaret Armen bad, but the fact she's the first Original Series writer who came to mind whose work this story most reminds me of is a somewhat uncomfortable prospect. Before we even get into the premise, which I take massive issue with, let's briefly note the basic writing structure, and namely how the plot and logic holes are absolutely gigantic. The whole concept of the Ur is simply dropped on us in the last few panels in the clunkiest of twist reveals, it's never really explained how they actually work (my best guess is that they somehow travel or communicate through sound waves as the afflicted crew members are shown humming in unison and the colonists destroyed their radios, but nobody actually comes out and *says* that), nor is it ever made clear why the Enterprise crew survived and the PH-11 colonists died, save for a token hand-wave about “their minds not being ready”, which is confusing at best and demeaning at worst.

Then there's the actual story. Far from feeling like something that could have been a fourth season episode, this feels like a first season pitch. A bad one. The impact of the story hinges on the Ur being not malicious alien invaders, but actually misunderstood travellers, and the “misunderstood extraterrestrial” angle was one that would have been tired even in 1969. Much as I dislike “The Corbomite Maneuver”, even *that* had a better setup then this as the cod-Cold War tensions of the majority of the episode are undone when Kirk and Balok manage to peacefully open a discourse with each other. Balok didn't brainwash the crew, hijack the Enterprise, drive it around for a bit and then apologise and make it all better because it was the only way he could communicate. And that's not even getting at episodes like “The Devil in the Dark”, which handle this brief so well it really never needs to be brought up again.

For this to come anywhere near the vicinity of working, what probably needed to happen was for the Ur to impose some other effect on the crew instead of mind-wiping them. That's violation and an invasion of privacy no matter which way you look at it and because of that there's no way for me to read the Ur as sympathetic. One idea might have been to have the Ur be a race of Lilliputian-like characters whom the crew can't see normally. Maybe the Ur have no choice but to shrink the Enterprise crew to get their attention. Even better would have been to have the Ur be some gigantic oversoul that is so physically vast by our standards it's not aware of the danger it's putting people in. The Enterprise crew would then have to find some way to communicate on its level: Maybe Spock could use his Vulcan telepathy to reach out to it, perhaps enhanced with Uhura's communications systems. In either case, what we'd then have is a story about how differences in perspective inhibit discourse and how that can be overcome through understanding, instead of a confusing, broken plot that ends up excusing mind rape.

The Ur's status as a hive-mind is somewhat interesting. There's the inevitable comparison to the Borg to make, of course, and at the very least depicting such an entity as peaceful as it's temporarily “assimilating” the Enterprise crew is somewhat problematic. As long as we're on first season stories, “Return of the Archons” also comes to mind with its firm condemnation of perceived groupthink and blind deference to a communal “body”. I don't think this is ultimately as much of a problem, though, as Star Trek was notorious for shifting its political and ethical stance depending on who the writer was that week, so seeing something in the fourth season contradicting something from the first season is a non-issue. A larger concern for me would be to read this as some kind of defense of communal living, mostly because I don't think that reading really holds. There's simply not enough about the Ur's motivation explained to us aside from them being Good Guys who want to get home.

I suppose I could make something of the name “Ur”. The obvious connection to make would be with the Sumerian city state of that name located near the mouth of the Euphrates river. This city named Nanna, the joint Sumerian and Akkadian deity of the moon, as its patron, which I suppose is at least superficially fitting of an extraterrestrial hive-mind if you look at it a certain way. Many scholars equate this city with the Biblical location of Ur Kasdim that appears in the Book of Genesis, which is where Abraham is said to have been born. “ur-” is also, however, a Germanic prefix meaning “proto-” or “original”, derived from the proto-Indo-European “*ud-”. So we could maybe say we have an ancient proto-intelligence that may or may not be also connected to the Abrahamic tradition taking control of the Enterprise to return to its point of origin, to its Genesis. This at least could be read as a somewhat plausible foreshadowing of Star Trek: The Motion Picture, and maybe even Star Trek III: The Search for Spock, which is a perfectly reasonable thing for something like Star Trek: Year Four to do.

But in the end while this reading seems to fit and is the best I could come up with, it's still operating from a perspective that's not really a primary interest of mine for this project, and really, even if this book did manage to successfully bridge the gap between the Original Series and the film series, the story it tells really isn't worth the effort. I can certainly see ways this could have worked, but it just doesn't for me. As a piece of reparative continuity it's too hazy and unfocused and, more seriously, as a supposed episode of the Original Series it completely fails to launch. The only remotely positive thing about this one is that we finally get to learn the name of that cool cat lady communciations officer. Share on Twitter Share on Facebook

Is there any evidence in this series that the presence of the cat lady officer is an intentional, unintentional, or subconscious, link or eruption of TAS into this comic series that was written as if TAS never even existed?

Another question: can we expect -anything- of merit from these comics at all? I always kind of dismissed all the IDW stuff as mediocre pap at best.

Still not sure what you're talking about, here. Though I can confirm the name of the cat lady communications officer is M'Ress, and this is the only mention of her in this series. Pity, as she seemed like a cool character who some fun things could be done with.

You'll probably enjoy the tack I take with the follow-up series. It's all about coming in and out of phase.

The next issue is a real doozy, and I mean that in the best possible way. Sadly, it's something of a fluke as well. But I have a sneaking suspicion the follow-up series will yield some fascinating erudition.

So glad I have not read this. The image of who appears to be Nurse Chapel on the cover just looks terrible.

Julian Cope in his book The Modern Antiquarian has a whole chapter exploring Ur. He suggests that Ur has been transformed into err, and then is found in words such irritating and irrational, which seem the best fit for this story, with regards to any interpretation of the name Ur.