There are several answers to the question "who originally created the Daleks?"  You could say "Davros" with geeky fidelity.  You could say "Terry Nation", as many people have (Trivial Pursuit used to also credit him with creating Doctor Who itself).  One could even start listing the people who actually constructed the props (wasn't the job outsourced to a company called Shawcross or something?).  As is usually the case, the most accurate answer is probably the most complex and contingent, i.e. "A consortium of people including, most prominently but to various degrees of importance, Terry Nation, Verity Lambert, David Whitaker, Raymond Cusick, Peter Hawkins, David Graham..." etc.  Without a doubt, however, the individual who did more than any other to make them a huge success was an in-house designer employed by the BBC called Raymond Cusick.  Cusick died a little while ago, widely recognised for his role by fans.

I'm a great advocate of 'ignoring the rat' or, as I prefer to put it, 'seeing past the bubblewrap', i.e. of giving weak aesthetics a pass if the story beneath them is interesting enough.  You shouldn't let the rubbishness of the big snakes detract from 'Kinda' and 'Snakedance', etc.  Indeed, those very stories are examples of when aesthetic 'failures' can actually make things more interesting.  However, there are times when aesthetic 'success' is absolutely crucial, when the way things sound and look really matters... and, for a show so widely considered to be cheap and shonky, aesthetics played a surprisingly big part in getting Doctor Who off and running.  The original opening titles, the TARDIS interior, etc.

Undoubtedly, the single biggest aesthetic factor in the early success of Doctor Who was Ray Cusick's designs for the Daleks.  Lots of people played a part in making the Daleks' first story such a big aesthetic success.  Tristram Carey's music, Christopher Barry's direction, etc., all made that story impressive, a strange and new kind of televisual experience.  But it was the Daleks that were the icing on the cake.

Oddly enough, the first bit of a Dalek we ever see, the bit which had the BBC switchboard jammed after the cliffhanger, was the bit most widely derided: the plunger.  It isn't until the next episode that we see the Daleks fully.  Their tanklike bulkiness, their strange mixture of sharp angles and curves, the obscure functionalism that makes them look almost like pieces of kinetic art, their shortness and wideness and sheer non-humanoidiness... and yet with enough that is intelligible about their shape (they have a eye which is part of something vaguely head-like) that they can be understood as sentient, intelligent, alive. 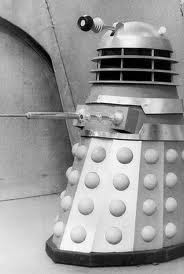 They are, undoubtedly, one of the design classics of the 20th century.  Distinctly 'of their time' and yet sufficiently detached from anything recognisably particular that they will translate.  Unlike the Cybermen or the Silurians, the Daleks remained the same - albeit with a few new little details - upon their return.  They didn't need changing.

If Cusick had done a bad job, if he'd bungled it (as, let's be honest, so many other designers would bungle in subsequent stories), not only would Doctor Who never have taken off the way it did (leading us all here, for better or worse) but Terry Nation would probably never have become the kind of person that Alan Whicker would want to interview.

The immediate success of the Daleks shows that, from the first, Doctor Who's success was built upon an aesthetic factor.  In this case, that factor was almost immediately translated into mass-produced merchandising.  The Daleks sold.  Big time.

Like all robotic monsters, the Daleks partly stem from anxieties about the autonomous product, which is what the fetishised commodity looks like to SF.  The Daleks are designed to look both inhuman and alive, mechanical and sentient.  They are, partly, one visual expression of anxieties about industrial production.  That's also why their appearance recalls the tank, a manufactured monster that, after two world wars, had probably become the quintessential image of the dangerous industrial product, overtaking even the steam train (which, in its early days, was likened to Frankenstein - the first fictional product monster).

There's a way in which the Dalek is a connective image between the anxiety about the product which centres upon its dangerousness (i.e. the tank), and the anxiety which centres upon its autonomy, the anxiety which centres upon its capacity to merge with us and contain us.  The Dalek is a war machine, a killing machine out of control that also threatens to be our eventual post-atomic shell... but by its very enigmatic attractiveness (all that suggestive-but-obscure symmetry, slightly disrupted by the clashing 'arms' which are obviously 'for' something even if its hard to guess quite what) also makes itself into a top-selling product.  This is commonplace now, with endless representations of film/TV monsters sold as toys or models.  At the time, however, the Dalek was quite new in this respect too.  (In some ways, they set the stage for the coming of the Kenner Star Wars toys and other such model/toys based on fantastic narratives.)  Those anxieties about the product already mentioned get immediately connected to the nature of the Dalek (in the real world that is, rather than in-story) as a commodity.  And, while this isn't conscious, it seems more liminal than the same set of connections implicit in, say, toy tanks or cap guns.  The Daleks were, after all, written to be a commentary on one trajectory of mankind, leading to eliminationist chauvinism and industrial/technological barbarism.  When you play with a Dalek, you're playing with something consciously created as a signifier for various political nightmares.  I don't say that this is terribly socially significant.  It's just another one of those interesting ironies of consumerism and its relationship with the wider culture.  I certainly don't think it's 'subversive' when embedded anxieties about capitalist modernity help to sell a product.  It's too commonplace.

There are all kinds of problems with Nation's original script (for instance, it's peculiar that his anti-Nazi parable has blonde, athletic, volkisch farmers as a physical and ethical ideal) but he deserves credit for providing a context against which Cusick's design can take on potent associations.  I'm quite happy to say that Cusick did more to 'create' the Daleks as we know them (their visual impact being so crucial to their success) but, on the other hand, Nation did (albeit using lots of cliches) give Cusick an idea with more potential resonance than just 'big, bad evil robot' to play with.  Cusick's acuteness (in making the Daleks both strange and familiar, robotic and alive) works with Nation's selection of certain tropes (the mutant, the cyborg, the post-Atomic, the Nazi) to create something that still seems to 'work' fifty years later.

Plus, when we were kids... we all wanted to get inside a Dalek and exterminate the kids at school we didn't like.

I really enjoyed reading this.

Fantastic work, Jack. Especially love the consumerist ironies, though to be fair, shows like "Flash Gordon" and "Space Patrol" were doing their best to market their toys back in the 50's. Part of what made Dalekmania catch on so fast was this kind of stuff was, well, child's play for capitalists by the time Doctor Who came around.

Brittany B Laury 11 months, 1 week ago

Hii,
This is really great post, I enjoyed reading. Thank you!
Visit the link in my bio to read my article.