Getting into a Lava

Posting this for something to do.  It's a tweaked version of something I originally wrote for Shockeye's Kitchen.  It's been rewritten to be more politically correct.


Several of the characters in 'Planet of Fire' are orphans (either literally or figuratively). Turlough and Malkon are literal orphans. You can look at the Sarns as the orphans of the vanished Trion colony. Peri also seems like an orphan in some ways. Her father is absent (dead?). She tells her stepfather Howard of her plan to travel to Morocco but doesn’t appear to have any plans to tell her mother about it. She goes to Howard for support and money, not to her mother. But Howard is too close to Peri’s age to properly serve as a father figure. Moreover, Peri seems attracted to him; she flirts with him by talking about "the God of love and fertility" and obliquely refers to the fact that he goes around displaying his washboard. Her decision to bunk off to North Africa with a couple of guys she’s just met is obviously a bid for Howard’s attention. Feverish after her brush with death, Peri has an intense dream about Howard abandoning her – a dream so powerful that it causes Kamelion to adopt Howard’s form.

(BTW, I dunno where this thing about Howard abusing her came from but there's precisely zilch in the televised story that either suggests or supports that reading.)

Talking of Kamelion, he’s actually a kind of nexus where the story’s themes meet. 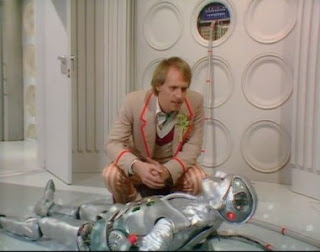 He’s another orphan. Like the ancient artefacts that Howard and Curt dredge up from the sea, like the crumbling buildings and technology of the Trion colony on Sarn, Kamelion is an artefact left behind by a decaying civilisation riven with internal conflict. Kamelion is being torn apart from within by conflicting influences and allegiances… just like Turlough and Malkon. Just as Turlough fights his inner tendencies towards cowardice and selfishness, just as Malkon fights the orthodox conditioning of Timanov, so Kamelion fights his connection to the Master. Kamelion’s inner struggle takes the outer form of a literal struggle for identity, for form.

The fractured families depicted in the story mirror the fractured social connections. Sarn is a decayed Trion colony. The planet’s society and geology are both running amok because the Trions are no longer there to control either. The Trions used technology to control the volcano and siphon off the power of the numismaton gas (just like all colonial masters, their primary interest was in the theft of natural resources). Without this control the volcano becomes periodically unstable and the Sarns use myth to explain it. Sarn was a convenient place for the Trions to dump their unwanted elements (like Australia for the British Empire). Religion was probably used by the Trions from the outset. The tales of Logar took on their own life in the ruins left by the Trion withdrawal, much as Roman religious practices degenerated into new cults once the legions departed Britain. The Sarn legends of Logar, the Chosen Ones and the Outsiders are corrupted memories of Trion activity – vulcanology, arriving spaceships, etc. 'Planet of Fire' depicts religion as a degeneration of rational understanding, a sign of cultural decline and a force for social control.

"Since my father’s time," Timanov tells Malkon, "unbelievers have been put to the flames." So human sacrifice is a relatively recent development, a response to the increasing instability of the planet. Timanov doesn’t just burn unbelievers because he’s a mean old religious zealot; he does it because he believes that Logar must be appeased. Timanov explicitly blames the unbelievers for the degradation of their society into "a primitive settlement on the verge of extinction." This is a convenient diagnosis for an embattled leader: every oligarchy (or, in this case, theocracy) likes to use dissenting groups as scapegoats. Social order is maintained by saying that heresy is the cause of strife. The social crisis caused by the fall of the Trion colonial civilisation is blamed on the whims of a supernatural being, as are the caprices of the volcano. As Howard pointed out (though he was talking about Eros not Logar): "the personification of natural forces in an anthropomorphic deity." Social forces too. 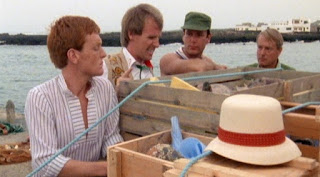 'Planet of Fire' is bursting with references to religion. Sorasta seems to be named after Zoroasta, the founder of Zoroastrianism. The Doctor makes a crack about the Master wanting "to be born again". The flame that purifies, the flame that does not burn… both refer back to the Old Testament. In one of his few impressive moments, Anthony Ainley seems to be taking the piss out of American televangelists – note the wonderful body language accompanying the "Wretched citizens of Sarn!" speech. For the most part, however, the references centre on Judaism. The mountain upon which the Sarns live is reminiscent of Mount Zion, especially when you consider the resemblance of ‘Zion’ to ‘Trion’. The Doctor, when planning the evacuation of the Sarns, says "we’ve a full scale exodus to arrange".

And then you have the Misos Triangle, a symbol made up of two overlapping equilateral triangles. Rearrange it slightly (and hollow out one of the triangles) and you’ve got a star of David. 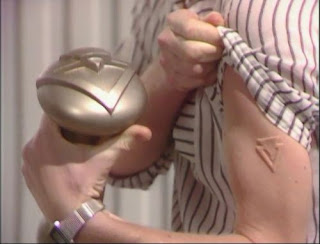 Who exactly are these "very special people" who were persecuted by the Trions? Were they criminals, dissidents or a religious/ethnic minority?  Perhaps the Misos Triangle can be seen as an echo of the Nazis forcing the Jews to wear yellow stars. If so, the transportation of the Trion "undesirables" recalls the lunatic scheme (briefly considered by the Nazis) to deport Jews to Madagascar. At the end of the story, the Sarns are a colonised people without a homeland, a race of refugees. If the Trion exiles were the Jews, the Sarns seem to have become the Palestinians... except that the Sarns don't seem interested in continuing to crush, exploit and humiliate them. 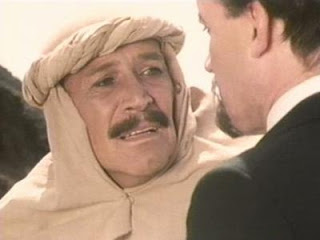 Peter Wyngarde portrays Timanov with dignity and sincerity which emphasises his contradictory qualities. His desire to kill the heretics seems at once a matter of convenience and conviction. Timanov’s belief is sincere but his motives are often far from pure. Timanov uses his ability to improvise with religious explanations for his own political advantage. He is not above bullying Malkon to retain his influence, even though his affection for the boy is obviously genuine. He interprets Logar according to his own wishes. Interestingly, Malkon learns this trick and turns it back on his teacher, aborting a burning because he claims that "by sending us the Outsider, Logar has shown his favour".

In the end, Timanov chooses to die rather than accept the new reality that dawns for his people. ‘Logar’ removes his helmet to reveal a heretic underneath. The irony is bitter and Amyand’s compassion is moving. But Timanov cannot relinquish his delusions or his power. He prefers to die; a gesture that mixes the noble with the cowardly.

I also really like Turlough’s leaving scene. Turlough is visibly shamefaced, stricken by the Doctor’s coolness. The Doctor is sceptical about Turlough’s motives. "Better to go back while you’re a bit of a hero, eh?" he suggests. 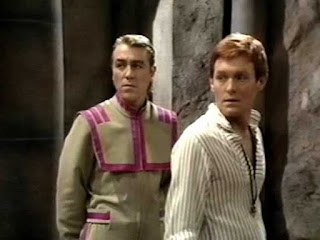 This is exactly the kind of homecoming that the Doctor refused in 'The Five Doctors'.

For all that, 'Planet of Fire' is undeniably marred by moments of inexcusable gormlessness. For example: if Kamelion/Master isn’t hurt by a kick in the shins, how can it/he be knocked out by a bit of falling masonry? The clanging sound you hear isn’t just the brick hitting Kamelion’s bonce, it’s also the sound of some very basic plot logic being carelessly flung by the wayside.

The wonderful Barbara Shelley is wasted - they really should have scrubbed Amyand and given all his lines to Sorasta. Having a prominent older female character might also have made the whole thing slightly less intensely gay (though that isn't a problem in itself).

And I’m still puzzled as to why the Trions took it into their heads to imprison Turlough in a public school. That is real judicial sadism if you ask me.

The element that fails most completely is the Master. The necessity of including him hamstrings Grimwade’s script. Grimwade does his best… the idea of an incapacitated Master using Kamelion as an avatar is a fundamentally good one, but it should have been because the Master was once again in a regeneration crisis, withered and decaying. The Doctor’s glib remark about the Master wanting to be "born again" would take on new pertinence. But, as it is, we get Mini Master. To put it bluntly, the whole thing sucks. For a start, why didn’t the Tissue Compression Eliminator turn him into a dead Action Man like everybody else?

The reduced Master’s threats to Peri, as she glares down at him from on high, are absurd. Is even the Master mad enough to threaten somebody 15 times taller than him? Luckily for him, Peri succumbs to a fit of sneezing and is unable to splat him with her shoe, which is clearly her intention. 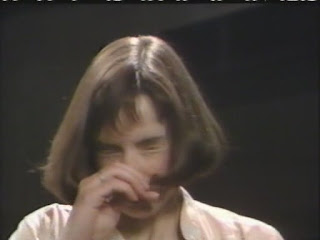 (It is, of course, a well known fact that women are always seized by sneezing fits whenever they encounter small, scampering mammals… I’m surprised Peri didn’t leap onto a stool, scream "Eeeeeeeeeeeeeeek!" and try to swat the Master with a broom.)


Freud would’ve had a field day. "So," I imagine Freud saying as he gazes across at Grimwade, lying on the couch, "you fantasize about being chased and tvatted with shoes by gigantic vimmen, jah? Hmmm, interesting… vell, you know, many men who call zemselves ‘Master’ turn out to be neurotic about being too small…"

Oh. Yes. One more thing.  I'm a socialist, which - as far as I'm concerned - entails feminism as a baseline requirement.  I try to be as much of a feminist as a man can be.  But there are limits to how much control the intellect (still less the political conscience) can exercise over the inner beast. Nicola Bryant in a bikini? Well, it's needless, exploitative, gratuitous, a perfect example of the 'male gaze' in the framing of a shot (despite being directed by a woman)... but all that being granted, I don't exactly dread the scenes in question and avert my pious eyes.