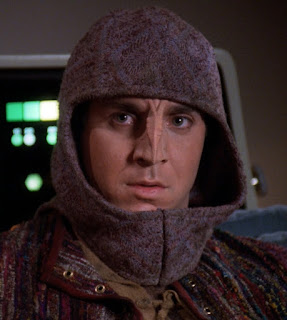 I don't just mean that I didn't watch it during the original run, or missed it on reruns, or that it never left a meaningful impression on me. I literally cannot remember this episode exists: Every time I rewatch this show, I forget that “Homeward” is part of the filming block. I can't remember what “Homeward” is about, or even that there is in fact an episode called “Homeward” at all. Every time it's brought up to me I have to look it up, because the title draws nothing but an empty, blank vacuous absence of meaning. I have friends who were watching Star Trek: The Next Generation along with this blog and, given the schedule I write under, eventually they got ahead of me. They liked to chat with me about my rough thoughts on upcoming episodes, and just a couple of months ago as of this writing they got up to the seventh season. When they asked me about my feelings on “Homeward”, I had absolutely no idea what they were talking about and had to turn to Memory Alpha. When I was planning this week's essays a few days ago and saw that “Homeward” was coming up, I had to look it up again because any and all traces of it had vanished from the recess of my memory even though I'd just looked it up again a few months back.

*That* is how forgettable “Homeward” is to me. It belongs to a very select club of Star Trek: The Next Generation episodes I simply cannot, for the life of me, ever remember as a material artefact of media, a club which also includes the likes of “The Survivors” and “The Masterpiece Society”. And, well, I can't say it's in terrible company, to be honest with you.

Longtime readers of the blog who are familiar with Star Trek: The Next Generation...You know what I'm going to say about this. For those of you who are newcomers to Star Trek: The Next Generation but not to the blog: It's a Worf story. It's a Prime Directive story where they wheel in a guest star (Worf's adoptive brother Nikolai Rozhenko, just to drive the point home by using a recognisable character) to lecture the main cast about why they're once again on the wrong side of history. Naren Shankar even goes so far as to *literally* compare Star Trek: The Next Generation unfavourably to the Original Series by saying Captain Kirk violated the Prime Directive all the time while Captain Picard “hides behind it” (as usual, Shankar is right but for the wrong reasons. He also seems to have an alarmingly poor memory of his own show). The structure of “Homeward' is built out of the most objectionable (well, to me at any rate) parts of stories like “The Defector”, “Captive Pursuit” and “Force of Nature”, and it's not worth wasting the time and energy to me to critique it on those grounds. If you've gotten this far in this project with me, it's nothing I haven't said and you haven't heard a million times before.

So let's talk about something else. Namely, the story I thought this was. Every time I look “Homeward” up because I've completely forgotten about its material existence and read “Worf's adoptive brother” and “violates the Prime Directive”, I immediately confuse this story with an event miniseries Michael Jan Friedman wrote for the DC Star Trek: The Next Generation comic book in 1995. Entitled Shadowheart (and this is one of the occasions where Friedman actually gives his miniseries a title himself instead of me having to make one up), it's intended to be a kind of sequel to “Homeward”...Except because I can never fucking remember “Homeward” I always end up assuming Shadowheart is a wholly original story. I may end up actually covering Shadowheart as part of my stubborn indulgence I'm calling Star Trek: The Next Generation/Star Trek: Deep Space Nine Season 7B/2B, at least as a possible bonus entry for the book version of this era if not as an actual blog post (I haven't decided yet as of this writing; I'll have to re-read it) so I don't want to get too far into analysing it here, but it's a damn sight more interesting than “Homeward” so I need to at least mention it.

Shadowheart sees Worf and the Enterprise receiving news that Nikolai has been killed during an uprising on Vacca VI. Regretful that he was never truly able to make up with his brother over their differences, Worf recalls their childhood together and how they started to grow apart after they attended Starfleet Academy. We also get a brief recount of the Boraal II incident, which I always took to be just straight exposition. Eventually however, we learn that Nikolai is in fact alive, having symbolically killed himself off in the public eye to start over as Shadowheart, a hooded vigilante folk hero who fights for the rights of the Boraalians, oftentimes violently and ruthlessly. Worf tracks him down and we get an extended discussion about identity, heroism, going native and finding one's role in life, in between bouts of kickass action sequences.

What's funny to me is how actually similar “Homeward” and Shadowheart actually are, in terms of the most basic rote plot details. In fact, they're so comparable one has to wonder whether Shadowheart ought to be considered a sequel at all and not a flat-out remake. And it should be small wonder that I keep mistaking “Homeward” for Shadowheart given my opinions on Michael Jan Firedman as opposed to my opinions on Naren Shankar. Because even though I don't quite remember the specifics and this is probably going to end up something of a placeholder essay until I get my post-season schedule straightened out, Shadowheart really is the more interesting and infinitely better written story. Whatever its possible failings, Shadowheart actually gets what it means to be a Star Trek: The Next Generation story and keeps its ideals close at hand. Because it is a story about ideals.

It's a story about Nikolai realising his true self and his true place in the universe. What he's doing is a kind of performance art that subsumes his own identity into an identity that's larger than life: A hero figure. As Shadowheart, he has attained a degree of immortality by becoming someone who will be admired, respected and have stories told in his honour for generations. This isn't Worf's story-Worf is involved because Nikolai is his brother and he loves and honours him, but this is the story of Nikolai's personal apotheosis. Worf's job is to help guide him through it and, at the end, welcome him into the pantheon. *That's* how Star Trek: The Next Generation is supposed to work. Share on Twitter Share on Facebook

Trivia from a trivial brain: the only sense in which Peter David's Golden-Duck-winning Starfleet Academy juvenile Worf's First Adventure is in a different continuity from this story is that Nikolai's forename had not been established when PAD was writing, so he called the character Simon.

The Star Trek: The Next Generation Starfleet Academy books are really interesting to me because IIRC they posit the Enterprise crew all knew each other from their Academy days and were already old friends by the time of "Encounter at Farpoint". I may have to take a look at that series during the aforementioned post-season glut of Things That Need Doing.

It's weird, there's a lot of these that I can't recall, but the second you mentioned Worf's brother, this entire episode came back to me, despite the fact that the synopsis in my head shouts "Really fucking boring Prime Directive episode"

Well, different things are memorable (or unmemorable) to different people for different reasons.

this is very informative and interesting for those who are interested in blogging field. Thank you very much, also visit mine click on the hyperlink Mathematics solution