How Curses Work 3: That Whole Rabbits/Tennis Connection There

I always dimly assumed that Stephen Harris - whatever combination of real people he may pseudonymically represent - got the idea for a story about pyramids on Mars from all that guff about there supposedly being pyramids and giant monkey faces on Mars.

However, I learn that the 'face' and 'pyramids' on Mars were not 'discovered' until the NASA Viking missions, which didn't snap pictures of the region of Mars known as Cydonia (where all the pyramids, town squares and giant useless chimp portraits are said to be) until after 'Pyramids of Mars' was broadcast.

The whole pyramids / Mars thing is alive and well today, beyond Who-dom.  Viz, this species of utter balls:

This kind of drivel has not been stopped - or even slowed - by better and more detailed images taken by NASA since.

Here, for instance is an image of the 'pyramid', taken by Mars Global Surveyor in 2001:

Self-evidently NOT an artificial, architectural structure, I'm sure you'll agree.  (If you don't, you have no business reading this blog.  Go away immediately.)

Here, is the spooky 'simian' 'face' on Mars, imaged by Mars Reconnaissance Orbiter in 2007:

Looks exactly like Roddy McDowell in Planet of Apes, doesn't it?

And yet, despite the fact that we now have very detailed images of this LUMP OF ROCK clearly showing it to NOT be a sculpted face, a brief (and depressing) googling session will turn up wonders such as this... 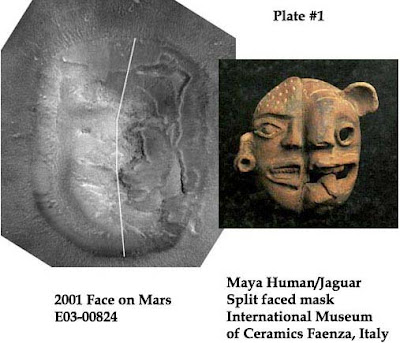 But, yet again it seems, good old Who may claim to have 'got there first'.  Hinchcliffe and Holmes did the pyramids / Mars thing before anybody thought there were any Martian pyramids.  That's almost as good as predicting a woman Prime Minister and the existence of Jim'll Fix It... and it tops Bob Holmes' previous best of satirising Star Trek: The Next Generation before most British people had even seen Kirk and Spock.

Back before Viking, if Mars had structures (an idea which the Mariner missions had already dented), they were supposed to be canals... even though the guy who first talked about Martian canals was being metaphorical.  In Italian.

Of course, most of 'Pyramids of Mars' is a concentrated rip-off of Hammer's The Mummy with some von Daniken-esque seasoning... but still, it seems to have done something original.  "Egyptology and Mars", as Lawrence Scarman put it, before such a connection had appeared elsewhere.

(If anyone knows of previous connections, please do let me know.)

Even some of those who take the pyramid/face stuff seriously seem happily aware of Doctor Who's prior claim:

So - without wanting to become like one of those pompous bumholes like David Aaronovitch (yes, a relation) who write smug, chin-scratchy things about conspiracy theorists and homeopaths - what does this all mean?

After a cursory glance at many of the sites where people pick over photos of Mars looking for evidence of alien buildings, I'm very tempted to wonder about the readiness of our culture to associate Mars with the motifs of the ancient East.

Much of this stuff is just turgid von Danikenism.  But von Daniken was himself a practitioner (at the wacky end) of a patronising attitude towards ancient, non-European cultures... all of it based on the implicit assumption that there is something inherently puzzling about the idea that 'primitives' in Africa, Asia and pre-Columbian America could possibly create great art or architecture or technology out of their own culture without the intervention of alien astronauts.

This is strangely mirrored in the Nigel Knealey way in which 'Pyramids of Mars' essentially obviates the claim of ancient Egyptians to having created their own culture.  Apparently, they just copied all their gods and stuff from... you guessed it... from alien astronauts.

This sort of thing pops up again and again.  'Death to the Daleks' invokes the Exxilons to explain how Peruvians could possibly have built their own temples.  In 'City of Death', Scaroth claims that he "caused the pyramids to be built".  Meanwhile, he never claims that he gave Leonardo any ideas... apparently the white European fella from the early modern period can achieve his feats of cultural greatness without any help from old wormface.

Of course, there are an awful lot of social scientists who harbour Eurocentric assumptions that are, in their way, hardly a million miles away from such stuff... so I think I'll stop laying into soft targets like people who really think there are monkey faces on Mars, or dead TV script writers.

I'd never made the connection between "Pyramids of Mars" and the Martian Face people before. It never seemed like something that there was ever a strong connection back to Doctor Who for to me. I think a perhaps more fruitful direction in which to take discussions of Doctor Who and von Danikenism is the eventual refinement of the concept into Stargate SG-1 via a heaping slathering of post-modern sensibilities.

I personally feel a simpler and more effective critique to level at "Pyramids of Mars" is that it just sucks: It's a careless, racist rush job that relies on Tom Baker and Lis Sladen's charisma and chemistry to draw attention way from the paper-thin plot, stupidly morally reductive and unintentionally hilarious villain, utterly botched halfhearted stabs at intertextuality and complete nerfing of The Doctor's role in the narrative. Thank goodness the effort Hinchcliffe and Holmes put into "Brain of Morbius" paid off.

Postmodern slatherings are not really my thing. Nor is Stargate SG-1. The movie was enough to put me off the whole thing forever. I quite enjoy most of 'Pyramids of Mars' though, perversely.

The theatrical movie or "Children of the Gods"? You shouldn't let either colour your opinion of the subsequent TV series-they couldn't be more different. The movie is a typically dumb cheeseball '90s sci-fi action movie by Dean Devlin and Roland Emmerich, the same creative team that brought you such masterpieces as "Independence Day" and the 1998 Godzilla remake. The TV show was a surprisingly intelligent and clever effort by a totally different team that kept nothing but the name and basic premise from the movie and played around with a lot of sci-fi conventions to send up everything from Star Trek to Doctor Who to, ultimately, itself.

On the topic of von Danikensm, if I recall correctly what was clever about the way SG-1 handled it was that the Goa'uld, the show's alien enemies, were not the inspiration for the culture and mythology of ancient people as is typically the case in this kind of story, but rather it was that they studied their belief systems and posed as the gods they read about so they could infiltrate and control Earth covertly. In other words the mythology and technology came before the aliens did. Also, they didn't just do this for Earth, but for thousands of star systems all over the galaxy. A common plotline early on in the show involved the team travelling to some planet and trying to convince the locals that the Goa'uld were not the gods of their legends, but imposters and that they should overthrow them.

To be honest I'd rather watch a decent episode of Stargate SG-1 than "Pyramids of Mars" any day.

Sounds interesting. Maybe I'll give it a go! Cheers.