“I Am Your Father”: New Ground 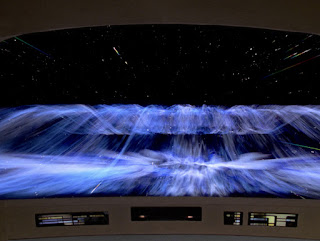 “New Ground” is a bit like “Ensign Ro” in the sense it's a rather middling, though functional, effort that exists primarily to introduce a new reoccurring character, or in this case reintroduce one. “New Ground” comes across a bit better than “Ensign Ro”, or at least more forgettable (in a good way) because it doesn't have the retroactive weight of Bajor, the Cardassian occupation and Ro Laren hanging over it and because Alexander is quite frankly nobody's favourite character (with the exception of Michael Piller's mother, which is apparently the reason he sticks around as long as he does).

Any problems this story has can be purely chalked up as conceptual ones it inherits by virtue of digging up Alexander rather then issues with its localized narrative structure. Simply put, Alexander was never a good idea, or at least the way they introduced him wasn't a good idea. The stink of “Reunion” is going to hang over the poor kid forever no matter what he does (and he does do some good stuff). Actually, the most annoying thing about “New Ground” is that like 80% of it works as a perfectly standalone introduction to Alexander before Deanna Troi has to come in and talk about how K'Ehleyr hurt both of them by not telling Worf about her pregnancy and not telling Alexander anything about his father or his Klingon heritage and how they both have to heal each other together. Of course, it's all K'Ehleyr's fault-The girlfriend and mother conveniently cut out of the picture who also conveniently can't come back to defend herself.

The plot, such as it is, fairly clearly is designed with a form-follows-function approach in mind. Kid shows up to live with his single parent, has trouble adjusting, gets into problems, situation arises where they're forced to work together and reconcile. The acting is good on everyone's part, but it always is, isn't it? That's barely worth mentioning now. There's a subplot involving something science fictiony and technobabley going on that crosses over with the A-plot, which is another device Star Trek: The Next Generation can use as a comfortable fallback. It's not as well put-together as it sometimes is (the idea that the sci-fi plot and the human plot could be the same and metaphors for each other was ossified way back in “We'll Always Have Paris”), but it works and it's cool, which always helps. I do remember the major setpieces here fairly well: That oscillating electric blue wave surging towards the main viewer, the explosive backdraft in the science lab with Worf and Commander Riker on either side.

But while “New Ground” may be constructed out of pre-built narrative devices that have become tropes, much as one might with Duplo blocks, it's telling that this time I'm not meaning it as a criticism. There's nothing blatantly ill-advised or backwards-thinking here, though trying to graft this kind of stock bad children's television plot onto Star Trek: The Next Generation isn't the most elegant thing the show has ever done. It does what it needs to do to bring Alexander back and nothing more, and I suppose there's something to be said for that. I guess my one question here is why, exactly this needed to be *quite* as stock as it is, or indeed why the creative team feels the need to do this sort of thing when introducing new characters.

Because while it works, “New Ground” still isn't a terribly *good* or *interesting* story about a kid-The argument could be made that Star Trek: The Next Generation just sucks when it comes to child characters and there's certainly evidence for that...And yet “The Bonding” exists and there are two episodes coming right up that are just about perfect stories about kids. And one of them prominently features Alexander. And say what you will about “Disaster”, Marissa and the others were certainly that episode's major highlight.

That's actually maybe a more interesting question: Why do Alexander (and Wesley Crusher before him) continually prove to be so troublesome when the show is clearly capable of doing good stories involving child characters? I think the answer to both lies in the fact neither character comes from a terribly good place and neither one is especially effective or well conceptualized. Wesley Crusher's problems are obvious and well-trod ground, being firstly a wish-fulfillment avatar and secondly the distilled essence of Nerd Culture and upper middle class white cis heterosexual male privilege. Alexander's conceptual issues are a bit more ephemeral, but no less crippling: “Reunion” aside, the big problem with Alexander is that he's simply never fleshed out or defined as a character at all. Sitting here writing this and even as familiar with this section of the show as I am, I couldn't tell you what Alexander's defining character traits are.

I know he's a Klingon child who's effectively an orphan raised by foster human parents and cut off from Klingon society. As a result his cultural identity is the source of much of his own personal journey. So...He's basically mini-Worf? What sort of narrative benefit does that serve and how does he enrich the kinds of stories we can tell about Klingon society vis a vis its interactions with the Enterprise crew? I'm not being facetious, I genuinely don't have an answer here, and I'm not sure the creative team did either. Alexander, like the story arc that quite literally birthed him, exists only as a satellite to Worf's larger explroation of his personal identity-He's nothing more than a supporting character who exists to be a subset to his father. And that's more or less the exact opposite of how Star Trek: The Next Generation should work: The show is about how people grow from travelling and interacting with the Enterprise, not how they absorb and appropriate other people's stories. This is a bad habit the show has occasionally fallen back onto pretty much ever since Tasha Yar, and unfortunately Alexander probably gets it the worst.

You definitely hit on the problem of Alexander. He's just kind of a non-entity, rarely performing with any singularity to his character beyond simply being Worf's son. Granted, the storyline of his and Worf's relationship always moved me a little, at least on its best days. I never really had male role models in my immediate family, and although it didn't exactly do me any harm, I was quite attached to father-and-son stories when I was younger.

Less so now, because my emotional and creative priorities have changed as I've gotten older and I've absorbed some of our current cultural contexts. While I like how their relationship develops Worf, it would be a lot more interesting if the relationship had developed Worf and Alexander at once. As it is, we don't really get a sense of Alexander as an individual until his last appearance as a teenager on DS9.

The best part of this episode was that it manufactured an opportunity for Riker and Worf to bromance it up and selflessly save a kid who almost died by selflessly saving a zoological animal.

The worst part is that, even with the excuse of a more rapid aging cycle for klingonese children, they still never stumbled onto the obvious choice of making Worf's kid into the Anti-Wesley.

It's a holdout of my teen years that I still really, really tend to skip "kid-centric" episodes. But it's hardly universal - Disaster had great kid performances. Wicked nineties TV, with a dash of cheese, performances, but totally watchable. You can't not smile at "Engineer in charge of radishes" or the "number one" confusion.

It was always kind of a strange permutation of the Worf-effect as well that Worf, the practically virginal member of the youthful Enterprise generation, knocked up his star-crossed one-night stand. I mean why couldn't Eternal Bachelor Riker, who has by now certainly fallen into the "traveling space sex tour" stereotype, had to deal with an actual awkward life scenario? Riker who disliked his dad for being distant, who might benefit a bit from dealing with comparative circumstances.

But I don't want to fall down the "might've" rabbit hole too far.

The kid totally shouldn't have been named Alexander, though. Should have been Warg or Varg or Klarg or something suitably klingony.