“In space, no one can hear you play the flute”: Lessons 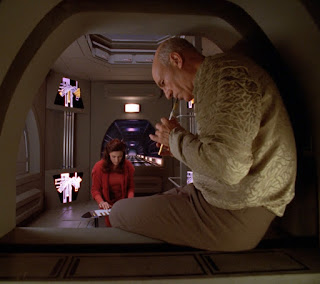 I'm afraid this is going to be another one of those essays where I don't have a whole lot to say or anything refreshingly new and interesting to add to the discourse. “Lessons” is bad, it's bad for boring reasons and it's bad in ways I've actually already discussed at great length in other posts. Normally this would be the kind of episode I'd throw into a multi-episode post, and while both this week's Star Trek: The Next Generation and Star Trek: Deep Space Nine are both equally terrible, they have the obnoxious gall of not being terrible in complimentary ways, which precludes me from doing that.

I would say that the one unique thing I could say about “Lessons” is my statement of dislike itself...I was under the impression that while not considered a great classic or anything, this episode was reasonably warmly received by mainline fandom-A necessary next step in progressing Captain Picard's story arc after “The Inner Light”. But even mainline fandom seems to be agreeing with me in this case, at least judging by the reaction this episode gets both on Memory Alpha and in Star Trek: The Next Generation 365: Its wiki page as of this writing looks neglected and incomplete and doesn't even feature the usual quotes and statements from the production team in the notes that most Star Trek stories get, while Paula Block and Terry J. Erdmann couldn't even be bothered to do anything more than halfheartedly re-state the story's diegetic plot and themes in their own words.

I mean, let's address the obvious points you know I'm going to bring up right off that bat. Doing a sequel to “The Inner Light” is stupid. Trying to set up a me-or-them contrast between voyaging, especially aboard the USS Enterprise NCC-1701-D, with a long-term relationship is a false dichotomy. Doing a naval (and navel-gazing) “involved with your subordinates” drama is hackneyed and trite. Captain Picard's entire attitude feels off, the romance plot is 90s sitcom quality and Commander Riker acting like a jealous schoolboy envious of the teacher's pet is an asinine and spectacularly out-of-character way to force banal conflict. That much should be obvious. But from my perspective, the problem here is that I've essentially already written the essay I wanted to write for this episode, except I did it for “The Outer Light”.

The whole reason I covered “The Outer Light” in the first place was to contrast it with “Lessons”. My idea was to set up my imagined plot for “The Outer Light” (which is not at all what the actual “Outer Light” was) as the proper way to do a sequel to “The Inner Light” while calling out “Lessons” for being rote, derivative and too hung up on an adolescent conception of materialism to add anything to the story worth hearing. My imaginary version of “The Outer Light” (which is not at all what the actual “Outer Light” was) had Captain Picard attending a summit of historians and scientific experts on Kataanian life and culture, all of whom had been contacted by the probe and experienced a slightly different version of the ancestor simulation programme. This story would have examined the malleability of oral history, as each person would have presumably brought their own positionalities and backgrounds to the experience and had it custom-tailored to them. As such, no two people experienced the exact same programme, which is fitting as that's how video games work in real life. I would then, in this essay, rail against “Lessons” for basically not being that and asking why the creative team felt the need to invoke “The Inner Light” if they weren't going to be able to play on that level (a level they already, it must be said, went on record saying they felt the original “Inner Light” played at).

Unfortunately for me, this was not at all what the actual “Outer Light” was. In fact, with it's horrendously stock premise, crippling sequelitis and twice warmed over grimdark themes, a case could be made it's an even *worse* follow up to “The Inner Light” than “Lessons” is. By the time I had figured that out it was too late to change my schedule so I had to cover it anyway and use up all of the criticisms I had of trying to do a follow-up to “The Inner Light” that I was planning on using in this essay in that one. And now I don't have a heck of a lot left to say. I suppose I could approach the story from a different angle by examining how the episode has Captain Picard interact with the rest of the crew instead of with Nella. I guess I'd best do that then.

So, one theme I haven't looked at as much is the idea some writers seem to have that Captain Picard is always aloof and has a hard time socializing with the crew. He's never at the crew's poker games, we never see him in ten-forward or the holodeck with other people, and he seems to spend most of his free time alone reading. The implication seems to be that he's austere and distant and seems more interested in duty and the ship than making friends or forming relationships with others. We saw a bit of it last week where Morgan Grendel (ironically enough) was trying to get across that the Enterprise is the most important thing in the Captain's life. It's the hoary old “married to the ship” routine which, in spite of what Grendel seemed to think last time, is more of a Star Trek tradition (because of the Original Series' hideously repressed sexuality) than it is a naval one. And we see it again here where Jean-Luc is buffoonish, awkward and abrasive while trying to pick up Nella.

The thing is I've never actually read Captain Picard this way. This could very well just be the result of me projecting again and not paying complete attention to what the show itself was saying back in the day, but I'm not entirely convinced it's all in my head either. “Starship Mine” is actually a really good example, because in spite of what the script seemed to be trying to say, whenever Patrick Stewart was interacting with his castmates their chemistry simply radiates a warm and endearing familiarity that seems completely at odds with the way the writing seems to want to depict their characters' relationships. And in how many episodes have the crew come to Captain Picard for advice, and how many scenes like those and the chat about ships in bottles in “Booby Trap” have we been lucky enough to see on this show over the past six years?

(Oh and speaking of Nella, isn't their “flirtation” in this episode the most painfully stilted thing ever? They both act and sound like standoffish and insecure teenagers in spite of being grown, middle-aged adults. It's almost like this was written by people who had no concept of how actual, mature romantic relationships develop in the real world. I would say Captain Jean-Luc Picard isn't Doctor Julian Bashir, but frankly in the context of this episode that's being unfair to Julian.)

I'd like to say this is just another idiosyncrasy of another forgettable filler episode, but this is unfortunately a plot thread that reoccurs every now and then in the show, even in otherwise good episodes. I guess when you come to a contradiction in the way a character is portrayed you have to pick which horn of the ensuing dilemma you want to side with, and which side you pick probably reveals something about your positionality. That's an argument that you can apply more broadly to all aspects of big, sprawling polyauthored works like Star Trek in general, and possibly their greatest strength in the opinion of this particular book series. Embrace the contradiction because each decision creates a universe unto itself. And maybe that's a truth that we can actually see the clearest in passable fare like this.
Share on Twitter Share on Facebook

Yeah, I've always seen Picard as confident in himself, aware and emotionally literate. So any of the stories that go against that don't really work for me. I saw this as a pretty shallow and a bit of a cheap shot at Picard and the crew - there's no way Riker would respond like that (well, not the one in my head!), he'd surely be overjoyed and grinning for the captain!