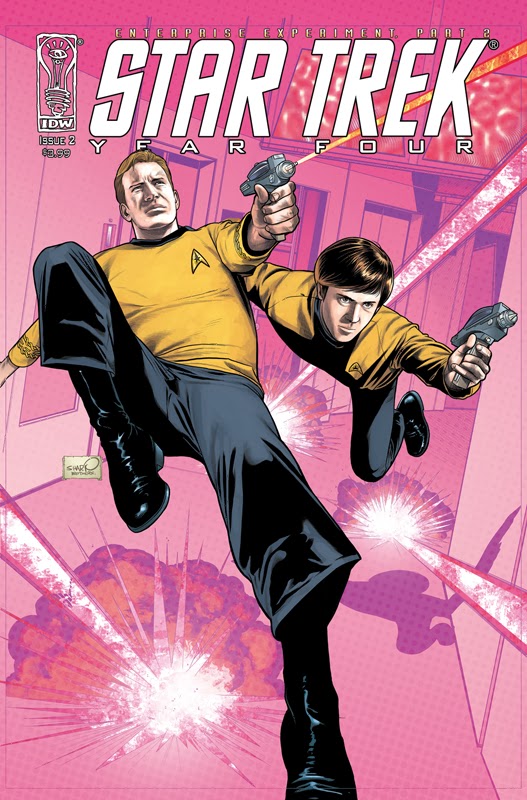 </We open with another pointless continuity reference. Sarek's presence at the exchange is obviously intended to foreshadow “Unification”, and as a result cheapens it by removing Spock's personal desire to see the Vulcans and the Romulans reunited, and thus his primary motivation. Attributing this to Sarek not only diminishes Spock by attributing his character's defining aspiration in the latter half of his life to “following in his father's footsteps”, it also makes no sense because that dream was very much meant to come from Spock *himself*: It's his own life experiences and view of the Romulans that grants him this positionality, and it's this that allows him to take on a totally unsanctioned mission. Furthermore, Sarek's comment about the Romulans' capacity for “paranoia and trickery” is entirely out of line, and I'd've expected D.C. Fontana of all people to catch that: The Romulans were far from paranoid and devious under her tenure./>

From there we get what is frankly an utterly brilliant scene as Kirk and the Commander trade barbs across subspace. Kirk complains she's violating the treaty agreement, she counters by saying she's no more in violation than he was when he crossed the Neutral Zone, provoked attack and stole her cloaking device. The Commander then requests Kirk surrender or she'll destroy the Enterprise and Kirk tries to bluff her by saying there's an entire armada cloaked behind him ready to strike if she makes a move. The Commander immediately calls him by casually stating that this is an obvious lie because her ship intercepted the distress beacon Scotty and Arex had sent out in the last issue in hopes of letting Kirk and Spock know of their condition and, oh yeah, Kirk left the shuttlebay hangar doors open. This results in an exchange so utterly golden it could only come from D.C. Fontana:

</What is brilliant though is how Fontana handles the Commander and her crew. As soon as we return to the present day, the story quite boldly gives the moral high ground to the Romulans, and more than once in succession: The Commander rightfully points out that Kirk is in no position to complain about her violating treaty and that none of his signature poker bluff diplomacy is going to work on her this time. What's also really intriguing is the thematic progression between the first few pages: We begin with Sarek's comment about inherent Romulan duplicity, and then the story goes on to show the Federation, and not just the Federation, but our supposed *heroes*, acting incredibly duplicitous and untrustworthy. It doubles down on the moral ambiguity the aired version of “The Enterprise Incident” was only allowed to hint at and ends up painting Kirk in a genuinely unlikeable light./>

“No Romulan will set foot on my ship...Except as a prisoner”

“Your pride will destroy all of your crew.”

“My crew knows the risk of serving on a starship. And our duty comes first...Commander.”

“Very well, captain. Then we shall speed your departure from this life.”

When the Bird-of-Prey's disruptors predictably pass through the phased Enterprise, the Commander demands Kirk tell her what from of trickery he's pulled this time, and Kirk responds with a genuinely nasty line about how “That's a Federation secret. And I have a tendency to keep the ones entrusted to me”.

</I love this line and the scene that comes after it./>

Meanwhile on the bridge of the Bird-of-Prey, the Subcommander from “The Enterprise Incident” requests permission to take a shuttle to the Enterprise, stating that it's not only the only way to get access to the ship, but an opportunity to prove his valour and gallantry for his people. The Commander quite reasonably asks him if he's trying to win the people's collective heart...Or hers.

</What we have then is an implicit comparison with Kirk's bull-headed and foolishly programmatic sense of duty and loyalty with the rash impulsiveness of the Subcommander, who’s not only acting out of some misguided sense of patriotism, but also from a teenage boy's attitude of what will get girls to pay attention to him. Fontana's taken the initial idea about the Romulans and humans being essentially the same people from “Balance of Terror” to the logical limit here: They have the exact same flawed stubbornness and hotheadedness and it'll prove to be the downfall of them both. Once again, the most reasonable, sympathetic person is the Romulan Commander: As a Romulan and a woman who's seen this all happen before in her declining empire, she may just be wiser and more admirable than we are. />

From here on out, the book is a solid action story as Kirk and the slowly de-phased crew first try to keep the Romulans from boarding, then preventing the Romulans from giving chase. This leads to some fun setpieces where the shuttle crash into the hangar causes the gravity to go out, thus naturally leading to a zero-G phaser fight, and Kirk and Sulu piloting the Enterprise *through* a quasar while phased to give the Commander the slip (naturally, she confides to her centurion that this is what any savvy tactician would have done and has a battlecruiser waiting on the other end of the star to catch them). And while these are fun and precisely the sort of thing only Year Four could do, this isn't such good news for Kirk: Absolutely none of his signature tricks (or, to be more precise, none of his signature tricks *beloved by a certain strain of Star trek fandom*) are working here. He's outmoved and outgunned at every opportunity and just manages to warp away at the last second.

</Granted, this story was written in the wake of the obscenely dark Dominion War arc and Ron Moore's Battlestar Galactica, and this story could be read as a reaction to those stories and an attempt to deconstruct the Original Series in the wake of them. But remember D.C. Fontana always had an eye on the grey area, and in truth, there's nothing about “The Enterprise Experiment” so far that's tonally incongruous with “The Enterprise Incident”, or rather, tonally incongruous with what we know the original version of “The Enterprise Incident” to be. It's almost as if Fontana, faced with the prospect of writing a fanwanky story for a fanwanky tie-in series to a dead franchise, decided she might as well use the opportunity to convey the message she originally wanted to and in the process meticulously pick apart everything else the more militaristically-inclined Trekkers loved about the show: She's taken aim at the heart of Gene Roddenberry's vision of the Original Series and dealt it a crippling blow./>

In the denouement, as the Enterprise undergoes repairs at starbase Deep Space K-12, Kirk and Scotty discuss the fate of the cloaking device in the engine room, and remark on how they'll be glad to see the back of it and how bad it would be if it fell into the wrong hands. Kirk leaves the job in the capable hands of a team of engineers from a little-seen engineering section: Section 31...

</At first the obvious Section 31 reference made me really upset: Here's another random bit of Star Trek minutiae Fontana felt the need to squeeze into this already pornographically fanwanky story. But in hindsight it does sort of make sense: If Section 31 were the ones responsible for, say, suppressing knowledge about Kirk's experiment and letting the experimental cloaking device fall into Romulan hands again, that would handily explain away “The Next Phase”. It wouldn't be *necessary* in the slightest, but it would at least make *sense* when taken alongside the new status quo this story creates. In addition, the invocation of Section 31 invites further comparisons with the Dominion War arc, which “The Enterprise Experiment” is growing increasingly similar to (and of course, it was D.C. Fontana who was always on the vanguard of that kind of interpretation of Star Trek anyway, and in particular with “The Enterprise Incident”. In fact, this stuff is probably *more* valid when taken in the context of the Original Series than it was on Star Trek: Deep Space Nine. Scratch that-it *absolutely* is./>

Thanks Josh. I have not read this as with the others, actually I don't think I have ever read any comic book based Trek stories (I was mad for the novels and novelisations!) - and in a way I am glad regarding this story so far, as it certainly sounds a real shame for the events in Unification to be so undermined by how Sarek is portrayed here.

Do bear in mind though that this comes right before the Romulan Commander utterly trounces Kirk and the Enterprise crew: I don't think Sarek's comment about the inherent shiftyness of Romulans is meant to be at all sympathetic, and later events do call into question his overall trustworthiness for me.

The call forward to "Unification" was totally unnecessary, though. It's the one bit of fanwank in this whole series I'm a bit iffy about.

Yeah get the point regarding Sarek you make, just missing the context as I have not read the story myself. Interesting that his ability to be trusted gets called into question - just makes Sock's actions in Unification all the more stronger later on then.

But is it compatible with the Marshak/Culbreath version of the Romulan Commander's fate?

Since you're more of an expert on Marshak and Culbreath than me, I think I'll leave that one to you.

I will say as this series is by D.C. Fontana, the Commander's creator, I'm a bit more in favour of giving this story the added weight.