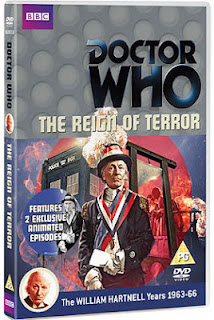 There's some rather charming interaction between the regulars at the start.  The Doctor is in a huff and, convinced that he has finally brought Ian and Barbara home, attempts to haul them unceremoniously off his ship.  They manage to charm him into coming outside to check that they really are in England circa 1963 before he zips off and leaves them.  Ian flatters him and Barbara hangs on his shoulder, brushing imaginary spots of dust from his jacket.

They encounter a dirty-faced urchin out in the countryside.  He is terrified of them, saying "I haven't done anything wrong!".  It was a land of fear, you see.  Fear.  Got that?

The travellers soon realise that they're actually in France of the past... which is confirmed when they almost immediately stumble into a safe house being used by the Royalist counter-revolutionaries.  Upon Ian's realisation that they're in the time of the French Revolution, Barbara immediately responds with "yes, the Reign of Terror" because that's all the French Revolution was.  There was nothing else to it at all.  That 11 month period sums up the whole thing.

The Royalists point guns at the travellers to begin with, but the leader, Rouvray (whose very name sounds a bit like the French word for 'truth'), makes a little speech about trust and faith.  It's handy that he immediately decides to trust Ian, Barbara and Susan (the Doctor is lying unconscious upstairs) because the house is immediately surrounded by a bunch of Revolutionary soldiers, lead by a glowering Lieutenant and composed of rough, crude, vicious, sniggering, toothless, dirty thugs in Revolutionary uniforms.  Rouvray attempts to outface them and, for a moment, it works.  "You can put them in uniforms Lieuitenant," he declares, "but they remain peasants underneath!"  Yes, he actually says that.  Heroically.  This, presumably, is his explanation for both their viciousness and their natural inclination to obey any man of breeding who shouts at them loudly enough.  The peasants overcome their inborn servility, however, and shoot him dead.  They are practically drooling at the prospect of shooting Ian, Barbara and Susan too... until their Lieutenant reminds them that 'Le Maistre' (who sounds like the kind of guy who might tie James Bond to a chair and beat him on the balls with a tennis racket) might give them a reward for prisoners.  Being lower class, they all immediately (sorry but 'immediately' is a very necessary word when describing the plot of this story) begin salivating with venal delight at the idea of getting some money in return for supplying Madame Guillotine with fresh victims.  They drag our heroes away and, before they leave, set the house on fire.  For no reason at all... except, perhaps, a desire to stare at the results of their own wanton destructiveness, their mouths open in gap-toothed leers, relishing the beautiful purity of sweet, sweet chaos.  The Doctor, you'll recall, is still in the house.  Boooo!  The flames consume the building and the camera follows them up into the sky as the end credits roll.  It was a land of fear, and the enduring image of episode one is of a house in flames.  It's all burning down, you see.  The revolution will consume us all like the indiscriminate conflagration that it is.

So, what do we learn from this?  The revolution was an indiscriminate blaze, started by ignorant savages who had conquered their natural desire to obey respectable royalists by obeying other drives, i.e. their own venality and their desire to kill and destroy.  The revolution was a time when everybody in France (apart from the revolutionaries) was terrified of being arrested and guillotined... and they were right to fear, since roaming parties of revolutionaries were likely to arrest you for just existing.  These gangs would round up anybody they happened to bump into and send them back to be guillotined for no reason, with the government in Paris happy to hand out monetary payments in return for fresh victims.  B'wah ha ha ha haaaaa!

I wonder if we dare hope that the following episodes will provide any context.  I wonder if, for instance, anyone will mention that, at the time of the Terror, France had already chased away counter-revolutionary armies from its borders and was still surrounded by forces intent upon reconquering the country.  A coalition - comprising the Prussians, Austrians, British, Spanish and Italians - was arming for war, with the declared aim of restablishing the monarchy and slaughtering anyone who defended the country against them.  Meanwhile there were very real internal conspiracies to aid the foreign enemies.  France in 1793 was a 'land of fear'... but it might've had a fair bit to do with the likelihood that the country would soon be overrun by foreign troops aiming to reinstall an absolute monarchy (I suppose these days we'd call it humanitarian intervention).  I consider the bombing of Dresden to have been an act of wanton terrorism and mass murder... but I'd consider it very dishonest and distorting if a TV drama depicted it without even mentioning the wider context.

I wonder if it'll be mentioned that the Terror began as, in part, a response to a call from the sans culottes of the Paris Commune (not the later one) to outlaw hoarding of grain by farmers, as the population of Paris was in very real danger of starving to death?  Will it be mentioned that the Constitution of 1793, ratified by public referendum, introduced universal male suffrage and guaranteed many rights, such as freedom of association, the right to education, assistance, a job, and popular sovereignty?  (The implementation of this consitution had to be delayed because of the exigencies of war.)  Will it be mentioned that the French Revolution inspired the slave revolt on San Domingue lead by Toussaint L'ouverture, and that consequently the revolutionary Convention in Paris abolished slavery?

These are, of course, rhetorical questions.  I already know that, like Simon Schama in his 900 page book Citizens, Dennis Spooner will find himself too pressed for space trashing the revolution to even mention a little thing like the abolition of slavery.

Of course, the Terror got out of hand and claimed thousands of lives.  The Revolution as a whole went badly wrong, judging it by its own early standards.  I'm not invested in trying to prove that the French Revolution was perfect.  Far, far from it.  But I can't help noticing that it was acceptable to do a Doctor Who story depicting the extremely long, varied, complex, contingent and in-many-ways-inspiring phenomenon that we call the French Revolution - an event which has helped spawn democracy as we know it - as nothing but an outbreak of mindless savagery.

Hopefully you will blog on each episode.

It shouldn't be surprising that the easiest and laziest way of producing a violent conflict for the small screen was the option they chose. There's no interest in seeing "two sides" to either of the sides! Rather, who are the baddies and who are the goodies? It's a goodie/baddie story, with the people in power using violent repression as the baddies, regardless of how they got there, and the people fighting them as the goodies, likewise.

It's difficult to stomach given the complexity of the period, but it's easy to understand given the kind of production standards for the first year of Who, every episode produced in a week. I doubt it's intended as a political commentary on the Revolution at all, just another context to exploit for telling a mundane, pedestrian story of capture/escape as conveniently as possible. Regardless of intent, it still comes out as reactionary dreck -- hell, just to want to tell such a simplified story is inherently reactionary, in my book.

However, there's one scene, at the beginning of episode four, where the Doctor meets Robespierre, that some small concession is made to the context of the period:

ROBESPIERRE: I could, and I shall, do great things for France. For too long the Nobility have kept our people to heel. And now finally, my world is at power, what happens? My colleagues, my trusted friends, plot for power.

DOCTOR: Do they? Or is it just their wish to keep their heads, hmm?

ROBESPIERRE: Danton planned to restore the monarchy. I had the proof, I knew! I had to dispose of him. And the Girondins. Even now, Convention members are at work, plotting my downfall. But I will triumph, even if I have to execute every last one of them! Death, always death. Do you think I want this carnage?

Is that enough? Didn't think so.

If you look at how Spooner handles other historicals, the same pattern emerges. It's not pretty -- Nero is played for laughs (including yet another attempted rape of Barbara, ho ho) until it's time for him to hulk out as a villain; Spooner is using historicals to employ well-corn tropes, regardless of the larger consequences of his decisions. It's definitely not the same approach used by Lucarotti or Whitaker.

This story actually provided my clearest personal example of how fiction can change attitudes. (Fortunately, it wasn't this doing the changing.) First time I watched it, I couldn't see much wrong with it, apart from it being less interesting than the better historicals and making the female half of the TARDIS crew overly wimpy. Second time I... tried watching it, that was with 41 episodes of Rose of Versailles behind me, in which the lead develops from being best friends with the queen to helping to storm the Bastille. My opinion that time was a lot more angry.