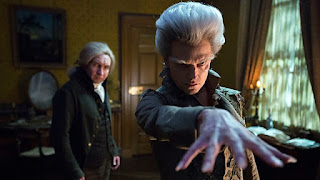 I got about as far into the book as this opening episode gets and my reaction to both was the same. Despite it ticking any number of boxes for me (English Gothic fantasy / Slightly alternate history / experimental writing style / etc. ) I found its charms easily resistable. It's 'slow burn' wick actually fizzled and died for me. Am I wrong? Is it worth pursuing? Is there reward for renewed perseverance?

As to the BBC TV adaptation. I'm filing it next to Gormenghast and Neverwhere as a well meaning failure. I suspect somewhere in the production is someone who, perhaps like me, doesn't 'get' the book, resulting in pantomime performances from some of the cast and a lot of over egged set pieces. I disagree about the statues for instance. This scene in the novel is very affecting; in the TV version it wasn't half as magical, reminding me more of those irritating 'statue' mime artists, covered in grey paint you get in all public tourist spaces these days.

Phil, what am I missing? Why should I give both book and series another chance? I'd really like to.

Eager to see your writeup for episode 3, as that's where I feel it really took off.

The statue scene particularly struck me, because that is the real York Minster they are filming in. I lived in York for a while and was a regular visitor to the Minster for church services. I know that building. The combination of the familiar real, and the magic overlaid on it, did a beautiful job of establishing the setting of Dark Fae England.
And that's where we are, in Strange and Norrell. We are in an alternate universe, technically, but one that hews so closely to the real that it doesn't feel like a different place. We are still in the England we know, and the history we know, but this time all the myths are true. There are portals to Faerie through which you might never return, and they hide down the sunken country lanes you've always known might swallow you whole. A gentleman's word really is his bond. Mirrors are not safe, and neither are books.

I think some of the pacing, of the book as well as the adaptation, is because this is a costume drama. This is a period piece, a comedy of manners, as much as a supernatural adventure. The contrast is part of the delight: here is a Cabinet minister and a gentleman newly come to London, taking tea and discussing a delicate matter of business, while the minister's fiance is dying of consumption and no-one will acknowledge it. Also, the business they are discussing is the reintroduction of magic to warfare. Much of the pleasure is in the combination.

Through some combination of a confusing cut and my own face-blindness, I spent the first episode under the impression than Jonathan Segundus was Jonathan Strange. Odd bit of naming, there.

I've been following the show's British transmissions - so, up to episode four right now - and it's picked up considerably and looks to do so even more for the last three episodes.

You should really really really REALLY finish the book. "Slow burn" doesn't even begin to actually describe what's going on with its structure: the first quarter of the book is actually the setup for one of the most elaborate and gleeful bait-and-switches that I can think of in all of literary history. This is important and relevant to your review because, well:

But it’s the supporting crowd that really crackles, particularly...

You have, so far, only met the supporting crowd. In fact your review of this episode has not even mentioned the name of the book's actual protagonists. In fact based on your review I'm not even sure they're present in this episode, although more likely they're there in the background and didn't seem worth mentioning by name which is very much the point.

Seriously, finish the book. You will not regret it.

See my longish rant below. I don't blame anyone for giving up on the book pretty quickly: the opening quarter of it is almost deliberately off-putting and boring. But it is (IMO of course) completely, totally worth slogging through it: when the actual story begins, it's like a bolt from the blue.

JS&MN is the most elaborate con job I have ever read, in the best possible sense. Even the damn title is part of the joke.

It's well over a year since I read the book and can't recall what you mean precisely by the "bait and switch". But yes, episode one is a big setup to get most of the protagonists onto the stage. Episode two [MILD SPOILER] did bring home the horror faced by Lady Pole, and I thought that was particularly well done. There's some material on my PVR waiting to be watched and I am certainly looking forward to it.

Is it me, or my TV, or is the visual palette very dark? I'm finding the night scenes hard to watch.

I think I disagree with you entirely on the matter of who and what the story is about; this will be interesting.

I do think it's unfair to demand that people read books they have tried and not enjoyed. I loved it from page one. Enjoyment of the book is not dependent on seeing the structure as a bait-and-switch or a con, and seeing it that way will not necessarily produce enjoyment. And it's a very long book to slog through in the hopes that it starts meeting your taste.

I found this from the first episode an exquisite show to watch. The immersing of us in an alternate world where magic is not hidden in some Harry Potter secret school, but is in the fabric of the culture, creating as duckbunny says above, a "Dark Fae England" - was so much fun and pleasure for me.

Zero chance of that happening before the end of the TV adaptation, but I may well do that.

This adaptation (four episodes in, here in the UK) has been (for me) pretty close to being a masterpiece because Peter Harness has figured out what escapes most people who try adaptations of intricate and complex works, which is that they must be entirely redrawn for the medium in which they are being presented.
And that requires the adapter to actually understand the work, rather than simply present it visually instead of in words. Thus the elements of the original novel that make it particularly literary are ruthlessly ejected and instead are replaced with a twisted pastiche of BBC Costume Drama as epitomised by Andrew Davies. (Now if only Zak Snyder had understood this when he attempted Watchmen. But that's a different argument...)
It is, of course, also worth noting that the BBC then decided to slide this out in June rather than in, say, October when it would, perhaps, have felt even more sinister. Which is, of course, the sign of a show that they have absolutely no idea about - it's clearly good because otherwise it would have been put out late night midweek, and it might even clean up in awards season if they are lucky. But the audience? They clearly have no idea if the audience will "buy" it. [Perhaps the most significant recent example of this was the first season of Sherlock.]

I wasn't sure I was going to like the book. Steampunk fantasia is a great sounding idea that's proven highly susceptible to Sturgeon's law. As it happened Clarke's vision and humor totally sucked me in. It's an unpredictable thing, though. There's no reason theoretically I shouldn't be a fan of Neal Stephenson, but I've never been able to get through his books.

I haven't seen the TV series yet. The stills certainly have me eager.

If it helps at all, I read it about ten years ago, after seeing Neil Gaiman at a talk where he called it the best fantasy novel since Lud-In-The-Mist. After reading it, I'm not at all sure he's wrong, although it's a *big* book, and slow going at first.

I read the book this very year and liked it very much, opening sections included. The beginning may not be action-packed, but it has an arch humor that drew me in immediately.

Duckbunny: well, if Phil had said he'd hated it I might have soft-pedeled my enthusiasm a bit, but it sounded more like he'd simply not made it very far in, which is... honestly pretty understandable. It's a totally valid objection that the book opens drearily slow, and if I'd been Clarke's editor (and if I had a pony) I'd've strongly recommended tightening it up a bit. Even if you disagree with my take on the book, I think there's not much debating that the pace of it picks up very quickly somewhere around the one-third mark.

I'm also pretty confident that Phil will either see the book the same way I do or have a fascinating reason for not doing so, so either way I'd love to see him finish it just to see his reaction :)

"Peter Harness has figured out what escapes most people who try adaptations of intricate and complex works, which is that they must be entirely redrawn for the medium in which they are being presented. "

Exactly. Even though four episodes into the series (here in the UK) we are a little concerned about how much of the story remains to be told, the adaptation so far gives me confidence that it will be satisfying.

Regarding the slowness at the start (of the show), I didn't notice. TV in general goes too fast for me these days, so my brain just accepted it as a sign of quality storytelling (really, it's just storytelling that matches my preferences).

So far, a great adaptation of a good book, IMO.

The cast is good. I'm finding even Mark Warren tolerable, although my imagining of the Gentleman with Thistledown Hair smiles more often.

I like that point about genre, although it's worth noting that it's an easy move for Harness to make because the template is already there. Long nineteenth century novels with talky omniscient narrators get turned into Andrew Davies style BBC Costume Dramas, so of course that's what you'd do to Jonathan Strange & Mr Norrell.

Posting this here after the last episode has just finished airing in the UK - and it was magnificent. One of the best book-to-screen adaptations I have ever seen; Harness kept a clear throughline all the way and yet managed to include enough stuff for the attentive viewer to realise that there were levels to the story that weren't being explicitly over-explained. And even his changes felt intelligent and appropriate (especially the fate of one character in particular...) Mind you, of course, if the cast hadn't been top-notch it would have failed completely.

The more I think about it, the more I think that the reason I loved it so much was that it was like a Moffat/Smith season of Who: it all just "works" but it works so much better when you are prepared to invest the time and effort to see beyond the surface. Sadly, it appears that not enough of the audience were willing to take that effort - but who cares about ratings really? This is what the BBC should be doing, and it does it better than almost anyone else.