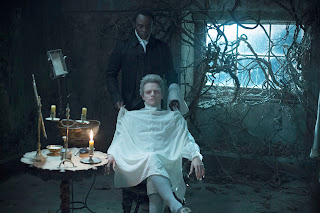 In a real sense, this, not “The Friends of English Magic,” is the first episode of Jonathan Strange & Mr. Norrell. Where the first episode was focused primarily on the task of worldbuilding, establishing the broad strokes of its alternate history, this episode is focused on the eponymous dualism between Strange and Norrell. In many ways, this is an aggressively classic dualism. Eddie Marsan’s Mr. Norrell is the older, more conservative figure of order - the fussy scholar most at home with his books. Bertie Carvel’s Jonathan Strange is the younger, more foppish and chaotic figure - the one who makes up his magic as he goes.
It is, of course, the oldest double act in English magic. Moore and Morrison, Crowley and Spare, Urizen and Los, et cetera. But like any great setup, it’s a cliche because it works. The order/chaos dualism that underlies Norrell and Strange is a good enough hook that Michael Moorcock got an entire career out of it, after all. Entirely on its own merits, as a premise, “rival magicians representing order and chaos over the backdrop of the Napoleonic Wars” is something you really ought to be able to get a good television series out of.
And the dynamic works. Marsan gives Norrell a compelling sense of patheticness that manages to stop well short of making the character unpleasant to watch, but nevertheless makes it easy to damn him. The cruelty of his cowardice when he opts to lie about Lady Poole’s maladies, saying that she is mad and seeking mainly to brush her existence under the rug so as to preserve magic’s respectability, is breathtaking, and yet the story manages to keep from simply labeling him the villain of the piece.
Similarly, Jonathan Strange, while certainly the more “fun” character, is not quite the hero. Indeed, it’s more than slightly interesting that the meat of their disagreement is not merely the way in which Norrell withholds knowledge and books from Strange, but the specific nature of what he withholds, namely books that would lead Strange towards the sort of magic used to resurrect Lady Pole. This nicely complicates the dualism animating the two characters: it is Strange who wants to take magic back towards the ancient and animist traditions of faeries, but it is Norrell, the character opposed to this, who has actually done so.
But as the title suggests, “How is Lady Pole?” is not exclusively or even primarily about its central dynamic. The Norrell/Strange dualism is the dramatic engine, but it’s not quite what the show is about. As with “The Friends of English Magic,” quite a lot of this episode is spent on the supporting cast. But, perhaps surprisingly, it’s a completely different supporting cast from the first episode. Here the focus is largely on three characters: Lady Pole, Arabella Strange, and Stephen Black, the Poles’ butler.
And it is here that the show begins to tip its hand towards its larger concerns, because those three characters are bound together by two things that do not intuitively go together, but where the implications of putting them together is profound. First, all three are defined by the marginal roles they occupy in society. Put simply, they’re the three prominent characters who are not white men. Lady Pole and Arabella are women, with the subordinate social positions that implies, whereas Stephen is as his surname suggests: black. This, on its own terms, would simply be a refreshing breadth of focus - a historical drama and fantasy story about early 19th century Britain that’s about more than just white men. But these are also the three characters who find themselves drawn into the orbit of Marc Warren’s capriciously sinister Gentleman.
And it is here that the show demonstrates its fullest potential. The old, animist English magic of faeries is being linked unmistakably with the subaltern, so that the old order/chaos dualism of Norrell and Strange becomes a fight over an entirely different sort of psychic territory than what we might expect, and certainly a different one than where either of the two protagonists expect. There is a frightening and compellingly potent structure of symbols being constructed here - one that, given the acclaim that the source material has and Peter Harness’s previous work, it is fair to expect is going to be pushed to a breathtaking breaking point.
Meanwhile, everyone remains on sharp form. I’ve already praised Marsan and Cavel, but the rest of the cast acquits themselves equally well. Charlotte Riley’s Arabella is a wonderful character, clever and sympathetic, so that when she wanders into the Gentleman’s orbit it feels like a genuine peril with real stakes. And Alice Englert is adept as Lady Pole, selling her hysteria convincingly, but then turning on a dime and revealing a steely insight as we realize that, though clearly psychically unwell due to Norrell’s Faustian pact over her, she’s also well aware of the nature of what has happened to her, even if she cannot do anything on her own behalf. Only Ariyon Bakare’s performance as Stephen Black feels at all lacking, and more in the sense of the character being something of a cipher at this point.
And Toby Haynes remains adept as ever. At several points during the episode it’s necessary for the mundane world to slowly and inexorably give way to something more unsettling and magic. Unsurprisingly, this is right up the alley of the director of The Impossible Astronaut/Day of the Moon, who creates a sumptuous visual palette of an ordered period drama with an unsettling and monstrous underside. There’s also another delightful effects set piece to sell the grandeur of magic within.
This is not yet a great show. But it is tremendously entertaining, and it is clearly setting the stage for greatness down the line.
I suppose a ranking is traditional.
Share on Twitter Share on Facebook

This is an excellent review (although it's Marsan, not Marsell).

I agree that Stephen is given (thus far) a disappointing lack of characterization, especially considering how well he's characterized in the books, but at the same time it's hard to blame Harness for leaving him a cipher when he's got so many balls in the air. It is unfortunate, however, that the character he characterizes least is the sole character of color. That said (and mild spoiler alert - I've been watching with the British airings), Stephen has the best moment in the whole series thus far in the next episode - it's absolutely breathtaking.

Marc Warren's Gentleman is a fascinating character, but I've been having a bit of difficulty unpacking him, which I'm sure you'll get around to more in the next episode - in a lot of ways, he's aware of the hierarchical structure of Victorian British society and its uniquely oppressive nature, but he's perfectly happy bending it to his own whims as opposed to actually helping anybody.

This series has me even more excited for Harness' Doctor Who episodes in series 9 than I already was after Kill the Moon.

I heard someone theorize that this was Harness' Jekyll and that he would take over post-Moffat, which I would be 100% into, but unfortunately he doesn't appear to have a producer credit on this and also lives in Sweden.

The reason an order vs chaos dichotomy works particularly well here, I think, is that in this setting it can function as a neo-classicism vs romanticism dichotomy, which makes it more concrete.

he's aware of the hierarchical structure of Victorian British society and its uniquely oppressive nature, but he's perfectly happy bending it to his own whims as opposed to actually helping anybody

Why should he help anybody, though, or have a problem with the hierarchies of Georgian society? After all, he is a gentleman (as the Devil is a gentleman). He's thoroughly callous and I've seen no indication yet (I'm watching British TV and haven't read the book) that he's motivated by anything other than his own entertainment and sense of aesthetics. And certainly his intervention is experienced as anything but liberation by those his interest lights on. All of which is in line with what one would traditionally expect of a fairy.

I'm still a bit uncertain at this point how far he really does understand human society, as opposed to psychology. There's an apparent naivety to certain of his designs where he seems to be guided by what we might consider fairy-tale logic rather than what could be expected to work in the human world.

Speaking of stories bumping magic into the mundane, I'm getting kind of a Sansa/Joffrey vibe from Stephen and the Gentleman - the gilded cage and the combination of adaptable submissiveness with a readiness to discreetly cheek the boss when the opportunity arises.

and also lives in Sweden

Hmmm. Is extradition on creative grounds a thing? The Swedes have quite enough good telly as it is.

Are you deliberately quoting Chesterton's "The Aristocrat"? Because, on recently getting around to watching this episode off the Loomis household DVR, the revels at Lost-hope reminded me ineluctably of some lines from near the end of that poem:

"There are things you need not know of, though you live and die in vain,
There are souls more sick of pleasure than you are sick of pain;
[...]
Where the splendour of the daylight grows drearier than the dark,
And life droops like a vulture that once was such a lark..."

This reminds me of Zen and the Art of Motorcycle Maintenence.

But as the title suggests, “How is Lady Pole?” is not exclusively or even primarily about its central dynamic

Seriously you are going to adore the book when you finish it. And it sounds like I should really get on the stick and start watching the series.

I took everybody's advice here and persevered with the series. Wow am I glad I did! I'm up to episode five now and it is just extraordinary. I've also gone back to the book and have started enjoying that more too. Susanna Clarke really didn't do herself any favours with those first few chapters.

This reminds me of Zen and the Art of Motorcycle Maintenence.

You are asking why? Have you read it?

"The old, animist English magic of faeries is being linked unmistakably with the subaltern, so that the old order/chaos dualism of Norrell and Strange becomes a fight over an entirely different sort of psychic territory than what we might expect, and certainly a different one than where either of the two protagonists expect."

Yes I love that Susanna's story shows us that the big grandstanding struggles that Norrell and Strange are engaged in entirely blind them from the territory that characters such as the women and the servants are going through and the very real struggles present there in society.

Loving the show so much it makes me want to read the book again.