My Long Term Relationship With Pain 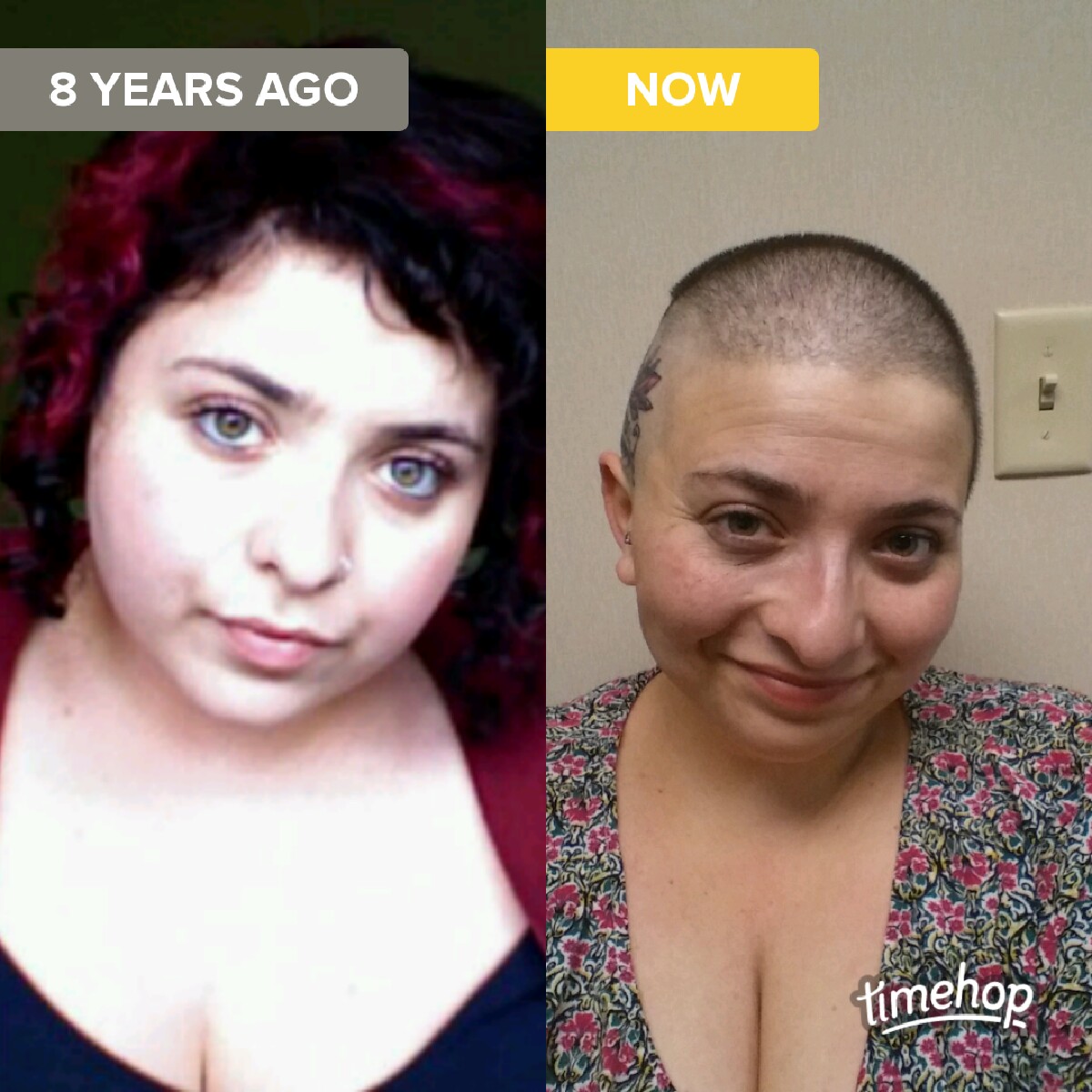 I remember the first time I hated my body. I was maybe nine years old in the second grade, and it was the height of Jenny Craig and the “before and after” picture method of advertising. I can still remember thinking: “someday I want to be an after picture.” I was a chubby kid but, seriously, why was that bad? From the vantage point of a couple decades later, I’m angry. I remember, around the same time period, first trying to talk to a doctor about my pain. We moved, I talked to other doctors, and they always told me to take a shower and stand under the hot water for awhile and I’d feel better. I wish I had kept track of how many times I was taught to ignore what my body was telling me. When I went to the doctor, they told me to lose weight and I’d talk about how difficult it was. I felt embarrassed, stupid, and frustrated that I couldn’t “stick with it” the way the doctors encouraged. Clearly I was depressed, and instead of treating me, they assigned blame to the fact that my mother was dying. It’s not that they were wrong, it’s just that they didn’t see the whole picture. It wasn’t until grad school that I was officially diagnosed as “too fat” for the first time. I was told my thyroid was beginning to be to have issues, that I had “fatty liver” and that my weight was killing me. I felt completely dissociated from my body. I couldn’t trust it, it lied to me every day, this is what social and medical-industrial-complex communities had taught me.

In and out of having health insurance, through two graduate programs and a toxic work relationship or two, I slowly learned to love myself. Don’t get me wrong. I hated my body. The meat sack. I knew that I had no control over it except for with piercings and tattoos and hair cut and color. I decided that no matter what I was going to love the me-ness of me. Falling in love, getting married, falling in love again with myself and others; it took a million different kinds of outside motivation that was (in my mind) completely divorced from my body before I met a doctor who empowered my me-ness. One doctor, who listened to my whole story, asked questions… and then proceeded to tell me that I had been lied to, even if only accidentally. He told me that all those tests that lead to all those previous conclusions were guesses, that my thyroid was fine and so was my liver, and for the first time he asked me about my pain.

When a friend of mine printed out the Mayo Clinic’s article about fibromyalgia, he gladly took it, read it over, and asked for some time to do his own research through the networks of information he had. I stopped hating my body. For the first time in decades, I listened to my body. We started figuring things out and I felt healthier than ever. I did my own research on chronic pain and associated illness and when I asked him questions he helped me understand how to interpret research into pragmatic effort. Of course, this is where that recurring loss of health insurance and a fatphobic society that still said the reason I was fat was because I was fat didn't help. By the time I got to see my current doctor, I had some answers, but maybe it was my nine year old self finally feeling validated enough to say something. I told my doctor what was wrong. She heard me and treated me and I don’t mean to fault other doctors for not being able to do the same: I don’t really have the option.

After twenty days of physical therapy, twenty days of true intentional living, twenty days of heart-wrenching trauma throughout the world, and I am humbled by myself. I appreciate my worth, I am marveled by my body, and I give zero fucks about those who aren’t.

Treating my fibromyalgia has re-taught me to communicate with my body. I listen to when it hurts and I’ve learned how far I can push it. I allowed myself to listen and respond how I needed to, even when that meant having to defend myself when instructors started calling me lazy, when well meaning friends would try to tell me that I didn’t need the spoons I was saving by choosing not to go out, when certain people stopped making the effort I had be making previously. Again, I can’t fault them. They didn’t know how much I wasn’t saying. They didn’t know that I was finally falling in love with myself. My me, *my* me-ness.

It is a privilege to not know what you’re asking for from someone.

I try not to place the burden of explanation onto people I meet now unless I they’re another “spoonie” or someone who speaks oopenly about their own chronic illness. I share every article that asks people to remind themselves to listen when a person tells you about their pain, no matter what kind, because pain is important. Pain is real, pain is relative, and pain forces us to try to understand someone else’s perspective. Pain is never about you, it is a warning system to highlight the actions of others.

Why yes, I do have a background in poetry, why do you ask?

Coming out has been important to me in the same way that the thirties have been the best years of my life. I am understanding how to find my peace amidst a storm we call history-in-the-making. Academic understanding of intersectionality demands a depth of awareness that is painful but I would rather understand the pain than ignore it. I can’t help it, it’s just me.

Apparently, after years of saying I’m not political, I’ve decided that that wasn’t an option anymore. The funny thing about intersectionality is that once you start to recognize the role of oppression in your own life, you start realizing all the people who have it worse than you. I wasn’t through a full twenty-four hours post-diagnosis when I experienced my first personal experience of understanding ableism. I had learned to excuse and suffer through fatphobic and medical ridicule, but no one was about to call me lazy for my illness. An illness that is hard to understand because it is invisible. I was fed up, angry, and tired.

I have less patience for ignorance and more patience for curiosity. I value my time more but I also value the time of others. Most of all, I try to withhold judgment. After years of academic and literary reading, sharing memes has been oddly comforting. There is a sense of community, a sense of understanding, and a sense that I’m being heard. That instead of having friends who complain about their cellulite and those last few pounds (but of course that has nothing to do with me because “I could lose weight if I really wanted to”), I have more friends who double-check to make sure I was bald because I wanted to be and not because of my health. There are others who are lost and don’t understand why I have to talk about being queer “all the time” since coming out, and there are those who have found me years later because my post on Facebook identified me as safe to talk to. There is a depth to understanding pain and wanting to support someone through their journey.

It's a toxic relationship. Our society fetishes pain both literally and figuratively. The meme goes that we need to stop praising the idea of being busy all the time and to learn to be more present. But the present is uncomfortable because the present is always changing. For some, especially the marginalized, it can’t change fast enough. I want to talk about race, I want to talk about gender and transphobia, I want to talk about weight, I want to talk about the power of love and understanding and welcoming more love into your life. Which means talking about all the ways we can work to lessen the pain of others because that's what love drives us to do. When you see someone else in pain, it doesn’t matter how bad they’re hurting -- it matters how that makes you feel. Like any toxic relationship, you can learn from your hurt and grow. If it hurts too much, you find help and protection in those who can hear your pain. This is the relationship that’s more worth the energy.

Thank you for that. I live with a friend who has ME and fibromyalgia and a daughter who has been suffering from post-viral chronic fatigue for the past nine months, and I myself live with chronic pain. Although my experience has been very different from yours I recognise a lot of what you say, particularly spoons and how much we decide to say. I have mostly been very lucky with doctors, although the one exception put me in danger of permanent spinal damage and loss of lower body function because he refused to believe that there was anything seriously wrong with my back (fortunately my physio was more concerned and passed me up to a specialist, who sent me for a scan straight away).

As a middle-class cishet white gentile agnostic Englishman, this has really been my first adult experience at the sharp end of an ism. I would like to make use of that to expand my understanding of (and support for) the more marginalised (hey, it's got to be good for something); although ironically one of the effects of my condition is that it takes me much longer to understand things and I forget more.

Yikes, gone on a bit more than I intended - thanks again!

Thank you for that! I had health problems - I could not accept the changes in my body (overweight), and psychological problems began - I stayed at home, stopped meeting friends. I tried a lot of things - I will not list, and the only effective remedy for me was hormone therapy (you can read more here https://hghtherapydoctor.us/). All this is accepted only by HGH prescription from a doctor, so I advise you to choose a clinic carefully. be healthy