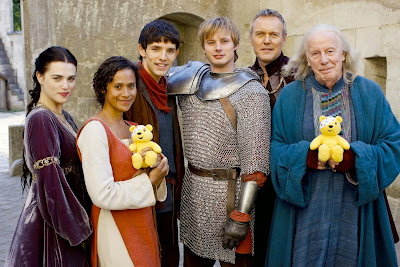 I thoroughly enjoyed reading this post, and it changed the way I think about the programme. Thank you.

I enjoyed the post, most of all the angle about homophobia, which had never occurred to me before, amazing though that may seem. It did occur to me watching the series that Merlin was bizarrely sexless and that must have been a conscious writing decision (who forgets to write a love interest?). Some thoughts

1) While we should be aware of how the prevailing ideology pervades through culture I don't know how disappointed we should be that it does. I think Merlin worked when it kept in mind just how silly it was (Robin Hood - the pre-Merlin - I think took itself desperately seriously). The obvious example of where it bungled was Dragon story, meant to be epic but it was just a daft plot lever (among other things) Also, if Uther was so vehemently anti-magic why did he keep a dragon in his basement... and guarded by the two most incompetent nightwatchmen in TV history? Its the awareness, or lack of it, that matters
2) Magneto may be a lot of things (I sometimes picture Magneto and Charles Xavier as holocaust survivors debating the future for Jewish people) but he best sums up urgency of anti-fascism: "people don't ever talk about genocide, they just do it".

Sure, we shouldn't be surprised or disappointed when culture peddles dominant ideology/power relations (though lots of people *are* astonished and angry when you point such things out to them, and need it pointed out to them again and again, or go into denial about it) but nor should we ever allow ourselves to lose the anger at how our stories are tainted by hierarchy and inequality. Wanting human storytelling liberated from class society may not be one of the most pressing reasons to try to do away with class society, but I think it's a valid one nonetheless.

Read this over on Phil Sandifer's blog when he put it up... really interesting. I've never seen an episode of Merlin - I live in New Zealand and I'm not sure we even get it here - it sounds like a bit of light fluff that nobody's really put much thought into, hence some of the Unfortunate Implications. Interesting if it was consciously written to connote homosexuality, but then, that argument's been made about the Harry Potter series too, though presumably for different reasons.