From the October 2011 issue of Panic Moon.  As ever, lightly edited and titivated... 'cos I just can't help tinkering.

When Doctor Who talks about evolution, it doesn’t usually bother getting the facts right.  'Evolution of the Daleks', for instance, seems to think species change when genes mutate morally because of lightning bolts.  Such ideas go right back to 'The Daleks', in which the two races on Skaro have changed totally in mere “hundreds of years” of mutation, with the warrior Thals becoming natural pacifists in the process.  (Incidentally, it’s ironic that this supposedly anti-Nazi parable speaks of blonde, blue-eyed, athletic specimens as “refined” and “perfect”.)

Real evolution does involve mutations, but they’re not sudden and drastic as depicted in, to pick another example, 'The Mutants'.  Instead we’re talking about tiny replication errors in genetic code which are preserved or rejected by natural selection, leading to big changes over very long periods.  This creates staggering variety on our planet alone.  However, most aliens in the Doctor Who universe look like British actors, which (accidentally) implies that the humanoid shape is a universal pinnacle or goal of evolution.  Again, real evolution teaches us the opposite.  There’s nothing “perfect” about humans.  We’re no ‘better evolved’ than worms.  Species succeed when they fit their niches.  'Full Circle' alone understands this.  The Alzarians are humanoid only because they evolved to fit inside the Starliner.

Doctor Who has sometimes been sceptical of such human hubris.  In 'Doctor Who and the Silurians', humans encounter ‘advanced’ reptiles who see them as errant apes.  'Inferno' implies that snarling beasts lurk beneath the lab coat or uniform.  'The Invisible Enemy' equates the “Great Break Out” of humanity with a viral epidemic.  In 'The Ark in Space', the Doctor praises humans as “indomitable”, but the Wirrn confront humanity with a lethal reflection of the same evolutionary urge to survive and inherit the Earth.

'The Ark in Space' retells the Old Testament myth of the flood.  'Genesis of the Daleks' also adapts the book of… well, Genesis.  Both stories are about species changing, about them subsuming and defeating other species.  But 'Genesis of the Daleks' is also fundamentally about creations disobeying their creator.  Hence the lack of scientific accuracy: the science isn’t the real interest of the storytellers.  Instead, evolution takes on religious connotations.  This is understandable.  Evolution, as a scientific origin story, thrives in the gap in the cultural ecology left by the decline of religion.  And, like much science-fiction, Doctor Who uses scientific and technological idioms to retell myths and legends.

'Genesis of the Daleks' also reiterates original sin: the Daleks are cursed by their genes to be bad.  Mutations of morality again!  This sort of thing mirrors tabloid stories about ‘genes for crime’, but Doctor Who has also tackled reactionary appropriations of evolution.  'Survival' critiqued Thatcherism by exploring what happens when the values of ruthless Darwinian competition are applied to society.  The term ‘survival of the fittest’ was coined by Herbert Spencer, a 19th century pioneer of libertarianism.  Natural selection was taken up by such philosophers of Victorian free market capitalism and made into a ‘natural’ explanation of inequality (though the much-traduced Spencer himself was actually a fair bit subtler than that).  This is partly what 'Ghost Light' is about.  As well as satirising “homo victorianus ineptus” who rails against Darwin on religious grounds, the story also swipes at Josiah, the newly-rising “man of property” who climbs the social ladder (explicitly linked with the “evolutionary ladder”) and keeps the deprived locked in squalor. 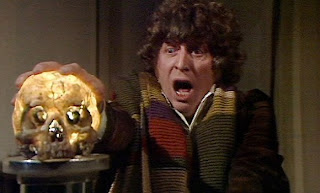 Josiah may be evil but at least he’s changing, unlike the archangel of stasis in his cellar.  Evolution keeps bringing the show back to angels and demons, as in 'Image of the Fendahl'.  But 'Image', unusually, really is about evolution.  Instead of using evolution to talk about myth, this tale uses myth to talk about evolution.  It shows the theory seemingly undermined by anomalous evidence and superstition, but the problem isn’t that evolution is untrue, leaving us at the mercy of the demonic.  The problem, rather, is that evolution is demonic.  As metaphor, this hits on something true: natural selection works by predation and extinction, i.e. by death.  The Fendahl is death, so the Fendahl is evolution.  And so are we, hence the "dark side of Man's nature" (those moral mutations again).  That's why the story has all those references to human paleontology, its central motif being an ancient human skull.  That's why the story has its rather oblique title: because, like God, the Fendahl shaped us.  It created us in its own image.  That’s probably also why Colby’s Christian name is Adam. Share on Twitter Share on Facebook

Interesting post. Darwin used the term "evolution" once in his written work, at the very end of The Descent of Man, and he used it in reference to the evolution of planets in accordance with the Kantian model of the solar system (also an inaccurate model). Evolution implies progressive unfolding from simplicity/immaturity to complexity/perfection ... as you rightly point out a human is as 'evolved' as a worm.

That said speciation can happen much quicker than is generally realised. It depends on the speed and severity of natural selection. There is, of course, the phenotype and genotype, roughly analogous to form an essence in traditional dialectics, which is loaded with the possibility of small incremental changes amounting to sudden outward changes in form.

I also wonder, if humans did meet intelligent aliens, if they would not appear roughly similar? Think of the things that need to exist in order for human intelligence to develop and be expressed.