Outside the Government 20: Wizards vs Aliens 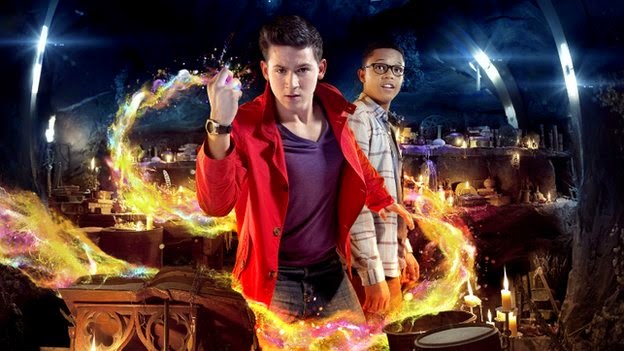 The Thirteenth Floor is the only thing from this series I've watched. I was quite impressed. The two central characters being mortal enemies, instead of Clyde and Rani as originally planned, adds a very different layer to proceedings.

I've only seen the first few episodes, but I understand "Wizards Vs Aliens" is rather good. Re. Diversity of female characters, I remember reading a radio times interview before the show's release where RTD stated that he felt he'd "Done enough" in terms of adding strong women to genre fiction, and that he wanted to do a buddy show instead. Which I disagree with because, well, genre fiction always needs to improve its diversity, but still, the comment at least sheds light o why the focus is on two male leads. Also, on the state of British children's drama, I don't think things are so bad - as well as WvA, we have Wolfblood, which is pretty darn good, and just finished its third season - I think there are still people willing to invest in British children's television.

Wolfblood was amazing. I found it entirely by accident (on my VoD service) and was delighted to see that children's drama wasn't entirely dead - not having children myself and with pretty much all those shows now exiled to remote digital channels, it's not something I am likely to seek out. Much as I enjoy Pointless, I sometimes wish they'd put some actual proper programmes on in that 5.15 slot again.

Neither of my children were impressed by Wizards vs. Aliens, though to be fair they were passing out of the target age range when it came along. My daughter loved Wolfblood, and that was a show I could happily watch too, though she's drifted away since (probably for age reasons). My son didn't like it, but that was because he wasn't into the world, not because of quality issues (rather like me and Buffy).

Speaking of which... whatever happened to Russell T. Davies' partner? Seems we heard no more of him after his being the whole reason for this show coming into being... :-S

Thank you for pinpointing why the show never resonated. I made a point of getting my girls to watch it when it first started (they loved The Sarah Jane Adventures), but it never hooked them, and I found it... worthy, but that was all. As a contrast I am - with my two older girls (13 and almost 16) - slowly making my way through Press Gang. It's a world away, and often challenging and uncomfortable. And I say that as someone who on the whole goes for fantasy/sci-fi rather than straight drama.

(Also one tiny point: It's 'bits and bobs', not 'bibs'. A bib is what parents put on a baby in a vain attempt to protect its clothing from messy food. Unless 'bibs and bobs' is an American idiom with which I am not familiar. In which case apologies.)

This is probably the last time I can mention it before the plausibility of the idea is smashed into tiny pieces by Moffat's Story Hammer this evening, but if they want a successor to SJA, they could set Gareth Roberts off making The Coal Hill Gang, a mash-up of Grange Hill and The X-Files.

I assumed we were getting a Clara spinoff, but if she's pregnant that seems unlikely.