Outside the Government: Dead of Night 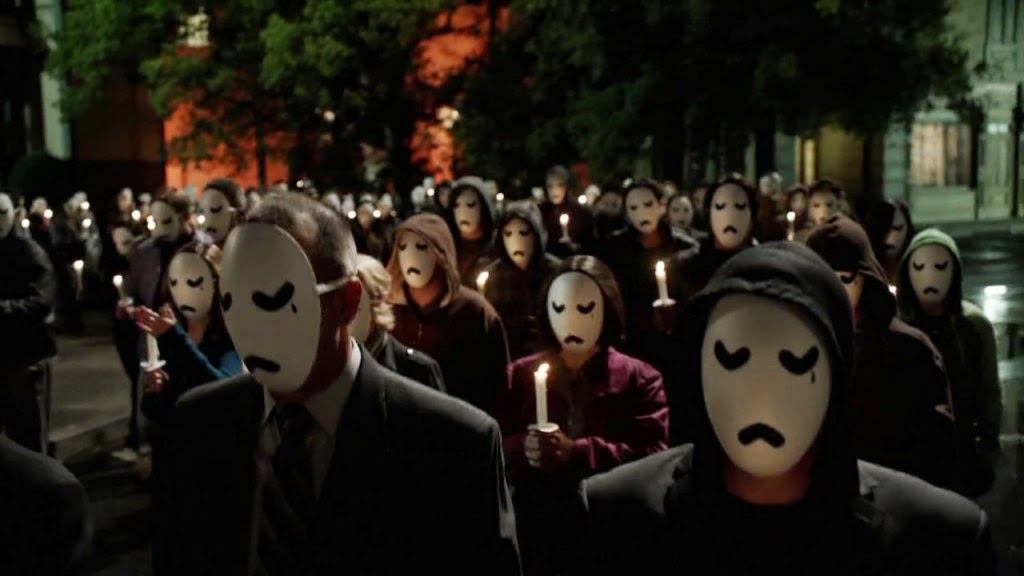 In the recent BBC America reruns edited down to fit a 60 minute slot with commercials, the entire gay bar segment is completely cut out, we cut from Jack seeing the bar and walking towards it to Esther talking about her old house to the next day with Jack hung over and talking about "gay jokes". Disgraceful.

I'm wracking my brain to remember for sure, but my memory is that the Soulless just show up in this episode. Sure, they're a more spiritual part of the same concerns that lead to the categories subplot later, but it really seems like they should have more concretely figured into the story later. Maybe have them somehow be wrapped up in the likewise spiritual Blessing subplot. Feels wrong to describe the ostensible climax of the series as a subplot, but that's Miracle Day in a nutshell.

Speaking of, here's a question I've never seen addressed, and this is as good a place as any to bring it up, did we ever get a sense of the, hmmm, "range" of the Miracle? In reality we've got astronauts floating around in the ISS playing Space Oddity, were those guys immortal too? Low orbit seems like a reasonable range, but what about the UNIT moon bases that may or may not exist? I'm trying to remember any human companions that got lost in other parts of the universe but in generally the same time period, but nothing's coming to mind.

I'm not bugged by it or anything, I just find the mental image to be incredibly amusing. Sorta the opposite of "how did all the aliens living on earth react to The End of Time?" Which, thinking about it, also applies here. But that's a path that inevitably leads to "why don't the Ponds mention this to the Doctor when they see him again?" and nobody wants to walk down that path.

Well, except to say that I like to imagine there's a missing Eleventh Doctor adventure where he visits Craig and Sophie between the Lodger and Closing Time during the Miracle and is completely dismissive of the whole thing, even as he's handling whatever the current plot is. "Ah, right, the global morphic field resonator got imbalanced again, that happens all the time. I'll fix it when I have a few hours to spare. Once it accidentally made everybody on the planet terribly itchy for three days, nearly caused World War One. I mean, I say 'nearly'..."

I actually think Oswald Danes works precisely because he's so sleazy and not actually scary. It seems like he's trying to be confident and scary and failing. A lot of real life serial killers come off as pathetic rather than terrifying even though you know the awful, awful things they've done. The problem then is why people are worshipping him, which I have no answer for.

Agreed. Bill Pullman's performance isn't one of the problems with Miracle Day. He's just a wretched, disgusting man. Jilly Kitzinger despises him but doesn't seem to be actually scared of him.

I once found a timeline of the Doctor Who universe on wikipedia - I think it may have been cribbed out of Lance Parkin's Achronology. It put the shooting of the Doctor at Lake Silencio squarely in the middle of Miracle Day. Which is hilarious.

I gave up on Miracle Day after this episode. I don't think I made a conscious effort not to watch - I just couldn't work up the enthusiasm to catch up with anything on iplayer.
The soulless were a big part of it I think. I sat through them and thought I just don't believe a significant number of people would react this way. Since we've mentioned Death at Intervals on the comments thread, Saramago absolutely convinces me that he knows how people would react.
I could put up with the running on the spot approach to setting up the plot if I found Davies' take on the world either compelling or congenial, and I found it neither.
The other thing that put me off was that Dichen Lachman was one of the best actors in Dollhouse, and they'd thrown her away on the plane episode.

It is - but to be fair, Parkin does address this at some length in the Ahistory footnotes. Basically, given the impossibility of fitting all the facts together, he gives priority to the April 2011 on-screen date given for Lake Silencio in the parent show (and other details from DW and SJA) over the phone records in Miracle Day, and squeezes the latter into the second half of the year. That way, it only definitely clashes with a couple of October-set novels, which was the best he could do.

Incidentally, I'm not commenting much because (unlike earlier Torchwood seasons) I haven't been able to bring myself to watch it again, and my memory's too poor to be able to say anything meaningful without doing so.

Yeah, I always thought Bill Pullman's curious underplayed scenery chewing was the only thing that worked in the Oswald plot. I mean, it was a bizarre enough digression that it held my interest in a "where the hell are they going with this" sense, but Pullman was the only part of it I found compelling in any sense.

Exactly. To me his performance is one of the few things that actually works in this... Though to quote a film a problem with his performance might be that its too realistic. People expect Bill Pullman to be playing a viscous nasty guy who murders children, but instead he's a sort of normal pathetic guy who murders children and doesn't feel bad about it. Which is more realistic, but... Not quite satisfying.

I was the one who noticed that. No really, it's on io9 and everything.

I also wrote a timeline which people seem to have visited a lot:

I ended up following Lance lead for the most part, and put Miracle Day between Night and the Doctor and The God Complex. But it doesn't really fit at all and you could choose to suggest it was wiped from existence after the events of The Wedding of River Song.

I tend to assume Torchwood's Miracle Day 'branched' off from the 'main' Doctor Who timeline. In other words, a parallel timeline (kinda like Donna's in Turn Left). That means there's no conflict with Series 6, and Miracle Day doesn't have to "count" either. Win/win.

I assumed that Miracle Day (and Torchwood in general) got eaten by the time cracks...

Esther is starting to come into her own.

How so? I kept waiting for her to show more initiative and/or backbone, or just to do anything interesting at all, but it never happened.

Incidentally, it's odd that Jack never hits on her, despite obvious opportunities. (Contrast his first meeting with Martha.) Is it because Jack is treated more as gay than as bi in this season? Or is it just that even Jack can't find Esther interesting?

Incidentally, is it deliberate or an accident that her name, Esther Drummond, sounds so much like Wester Drumlins? If it's deliberate it's a bad mistake, since the comparison with Sally Sparrow is not to Esther's advantage.

To my knowledge neither the Doctor nor Amy nor anyone else on DW ever said as much as "Hey, everybody on Earth stopped dying for a while. Weird." So for me it's easiest to believe that Miracle Day takes place in some split off timeline, due to either "The Big Bang" or maybe "The Wedding of River Song."

Depends what you mean by "works". The character might be realistic, but that just emphasises that his role in the story isn't. PhiCorp are supposed to be desperate to have Danes as their spokesman because everyone hangs on his word, and nothing about him gives any reason for this.

Nobody in the Whoniverse ever talks about anything that happened earlier unless it's relevant to the plot. (Donna talks about previous invasions in "The Runaway Bride", because this is part of establishing her character, and Wilf talks about them in "Voyage of the Damned" because it's funny. Otherwise, previous invasions might as well not have happened.)

Interesting that BBC America would do that, considering they've no qualms with showing Orphan Black (and I mean the "no qualms" as a GOOD thing, because it'd be horrible if they were prudish about it)...

Isn't Miracle Day initially set in early 2011, February or something? It then carries on through a few months. Considering that Amy and Rory don't really visit their own time until the second part of Series 6, why should Amy and Rory mention the Miracle? They probably missed it.