Outside the Government (End of the Road) 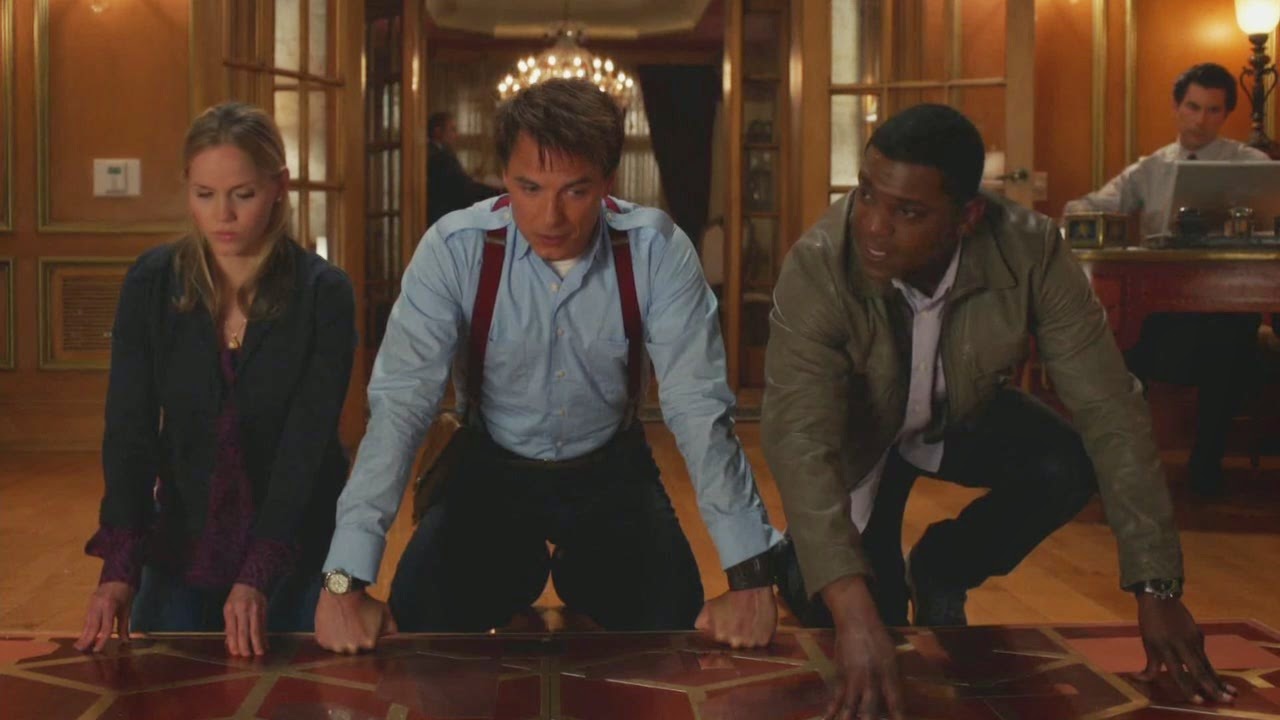 It’s August 26th, 2011. Katy Perry is at number one with “Last Friday Night (T.G.I.F.),” a song that sounds suspiciously like it is about having fun. How ghastly. In other outdoor places, rebel forces begin the battle that will seize Tripoli and overthrow the reign of Muammar Gaddafi. In a more indoor flavor of news, a dying Steve Jobs steps down from Apple. Also, there’s crap on television to tolerate.
It is in some ways helpful and convenient for Miracle Day to cough up an outright bad episode, if only so that the rest of the season can be put into some sort of perspective. Like “Rendition,” “End of the Road” is essentially a bottle episode concerned with getting the story from point A to point B. Also like “Rendition,” it runs into the problem that there is not actually very much room between point A and point B. Unlike “Rendition,” it doesn’t cover this up with an extended piece of ludicrous goofiness involving ripping apart an airplane to chelate someone’s blood with degreaser. This is, shockingly enough, a pity.
Instead what we have is a return to the bad old days of Season Two of Torchwood, with an episode that is just completely misconceived and misbegotten. The plot consists entirely of Captain Jack sitting around in a room all episode. Sometimes, for variety, they cut to a hallway, or even have some characters go outside. There’s the most impressively expedient character death ever as Nana Visitor’s character is blown up in a thoroughly contrived car bomb once her exposition is resolved. Esther’s sister comes back purely to motivate Esther to do something stupid again. The episode doesn’t even entirely understand where its reveals are, dropping the discovery that Charlotte works for the Families in a completely swallowed plot beat. The contact lenses acquire magical new powers out of nowhere. And the plot holes are worse and bigger than usual. (I particularly like that Jack is brought to the Colasanto estate so that Angelo can tell him how the Miracle started despite the fact that a) Angelo doesn’t know and b) Angelo is dying and apparently can’t speak.)
So it’s an incompetently made mess. Fair enough. And certainly some of the problems - the use of American cult film/television stars for hazily defined cameo roles, the plot holes, the tendency to bring in seemingly major events just to motivate a plot development and then discard them - are endemic to Miracle Day in general, merely coming to a particular head here. The writing credit speaks volumes - “Story by Ryan Scott, Teleplay by Ryan Scott and Jane Espenson,” which is to say, they had a script in particularly dire shape and handed it off to Jane Espenson in a desperate attempt to fix it. (Also rather sizable is the fact that Jane Espenson gets script salvage duties, which is to say, Russell T Davies isn’t even involved enough to be doing rewrites.)
But what really stands out is the degree to which this isn’t normal for Miracle Day. Yes, the episode is crap, but at its core the problem isn’t just the sloppiness but the fact that there’s not actually much of an idea behind the episode. Even the title is inscrutable - what road ends, exactly? The core team’s interaction? Sure, they’re split up, but it’s not the first time, and it’s not like they’re not going to keep working on the Miracle. And that’s unusual. Whatever problems Miracle Day has, they’ve generally been on the aggregate level as opposed to the episode level. Each individual episode has generally known what it wants to do and what sort of story it wants to tell, and has done a reasonably competent job of achieving its own goals. It’s just that they haven’t added up to a coherent series on the whole. This is, to be sure, a problem. But it’s worth noting, in contrast, that the series hasn’t done this, which is to say, an episode with no ideas, no concept, and nothing to do besides spinning its wheels until it finally reaches fifty-five minutes and can do a cliffhanger.
At least Doctor Who’s back next week.
Share on Twitter Share on Facebook

Doesn't the episode commentary for ten reveal that the script they had for this fell through and they had to rush through a page one rewrite?

In my LJ, I appear to have rather enjoyed this episode, although how much of that is my general reluctance not to say something bad about things, I'm not sure.

But it's interesting that for all my apparent positivity, this was the point where I just ... stopped watching. The Skybox obediently recorded the final two episodes, and I ignored them until eventually they disappeared off the end of the stored programmes. When it was repeated on Watch last year, I thought "I should probably at least find out what happened", and recorded them again. Without checking, I'm honestly not sure if they're still there.

I just recall thinking, "well at least something seems to be happening with the plot."

I think this is the episode where I gave up on Miracle Day and didn't bother to finish it.

I've been meaning to ask: what happened to the site for the 50th anniversary book?

Hey. (Hope Phil's okay with me responding here.) The site was unfortunately taken down due to a member of fandom who tried to lie and claim ownership of everything. The final project, the book, is still available though for purchase, it's just that the site and posts about it are now removed.

I applaud you for making it this far, frankly!

I feel like I have completely missed something. What 50th Anniversary book?

Nothing official or anything. I put together a large fan-written book ("Celebrate Regenerate" back in 2012/2013, crowd-sourced as many fans as possible via Twitter, to celebrate and do a write-up for every story.

Wait...Nana Visitor was in this? And her character gets crassly blown up?

That's...Huh. I mean, way to completely and utterly waste your talent, Torchwood.

That's pretty nifty! Bookmarked this as a reminder once payday comes 'round.