Outside the Government: Escape to LA 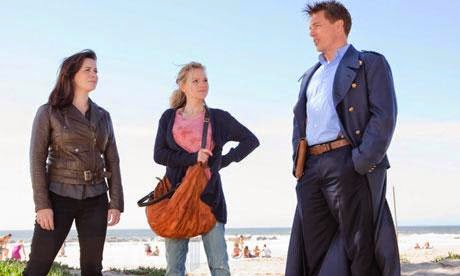 The schedule for this week will be Miracle Day on Monday, Wednesday, and Saturday, comics reviews on Thursday, Last War in Albion on Friday, and Waffling on Sunday.
It’s July 29th, 2011. LMFAO remain at number one. Forever. In news, Amy Winehouse dies, Congressman David Wu resigns over a rape allegation, and Congress decides to ignore the ten year term limit on FBI Directors to keep Robert Mueller in place.
While on television, more Torchwood. “Escape to LA” falls in an interesting place within Miracle Day. Not to look ahead too much, but with the next installment, “The Categories of Life,” Miracle Day finally hits a point where you can say with a straight face that it’s working. Which is to say that “Escape to LA” is another component of the awkward start that doomed Miracle Day. And yet in almost every regard the worst of that start is over, and the series is finally starting to get to the things it’s going to do well. It’s just that it doesn’t actually do them well yet, leaving that as a topic for Wednesday.
Here, though, what is interesting is that “Escape to LA” is in many ways a bespoke episode. In hindsight this has been an element of past episodes - the entire series thus far has been unusually focused on single episode storytelling: the instantly disappearing Soulless, the single episode villain of Lyn Peterson in “Rendition,” et cetera. But “Escape to LA” takes this to, perhaps, its furthest extent. Ellis Hartley Monroe, Jack’s father, and C. Thomas Howell’s nameless assassin are all single episode characters who exist to show up, make the plot of this single episode work, and then disappear into thin air.
This is, to be sure, an odd move for a ten-part series focused on a metaplot. Some of it is clearly motivated by a desire to do some stunt casting, although it’s not clear that Mare Winningham or C. Thomas Howell are particularly big gets. They’re both competent and respectable American actors, and the US equivalent of Torchwood getting, say, Richard Briers for an episode. But the decision to structure entire episodes around the ability to get them in for two days of filming creates a bizarre effect, in that “Escape from LA” ends up weirdly disconnected from the episodes on either side of it even as it picks up the plot from “Dead of Night” and sets up the plot of “The Categories of Life.”
Perhaps the most bewildering is Rex’s father, a scene that exists in strange isolation from everything around it. In an episode that hinges in a large part on the consequences of Esther’s inability to leave her family alone, Rex’s decision to visit his father (a father who is clearly known to the CIA, as Esther says she found mention of him in his file) has no consequences or implications whatsoever. It’s barely set up, little yet paid off. And within the scene there’s precious little content - clearly Rex and his father do not get along and never have, but there’s not even a hint of why. Neither of them mention any other family members, or any incidents from their past that might enliven the scene. It just exists in a weird little vacuum.
Which thus far sums up the problem with Miracle Day. Everyone involved is capable of baseline competence. Indeed, four episodes in, it’s not nearly as dire a situation as Torchwood Season Two, where everyone was aiming for mediocrity and sometimes even hitting it. Instead what we have is a bunch of talented writers who aren’t so much marching to the beats of different drums as marching without any drumbeat at all, meandering and doing reasonably well, but not adding up to anything coherent.
It’s no secret why this is about to turn around. Of the back six episodes, four have feature a single writer on them - one with her own clear and distinct vision that successfully makes Miracle Day about something. Unfortunately for the series’ overall reception, there’s too much meandering setup to get through before the relatively successful latter portion happens. It improves from this point on, but not nearly soon enough to salvage the series’ reputation.
All of which said, Eve Myles affecting a wretched valley girl accent is one of the greatest uses of television ever.
Share on Twitter Share on Facebook

In paragraph 3, shouldn't that be "Rex's father" instead of "Jack's father"? I didn't see the episode when it aired, but I assume that your post would have mentioned it if there had been a sudden digression into the 51st century.

***
Instead what we have is a bunch of talented writers who aren’t so much marching to the beats of different drums as marching without any drumbeat at all, meandering and doing reasonably well, but not adding up to anything coherent.
***

Establish the basic framework of the "miracle" and have bunch of really good writers do independent episodes about different ways in which people react. One story about a family struggling to care for an elderly and demented relative, another of a funeral home director trying to figure out how to make a living, a medical episode on trying to care for someone painfully injured to the point of death but unable to either die or heal, etc.

"Not to look ahead too much, but with the next installment, “The Categories of Life,” Miracle Day finally hits a point where you can say with a straight face that it’s working."

I really wish we'd had this instead!

It apparently reaches a point where Philip can say with a straight face that it's working. Less sure about the rest of us. I personally thought some of the earlier episodes were pretty good and that then it went totally off the rails.