Outside the Government: Lost in Time

Last War in Albion will run on Friday this week. 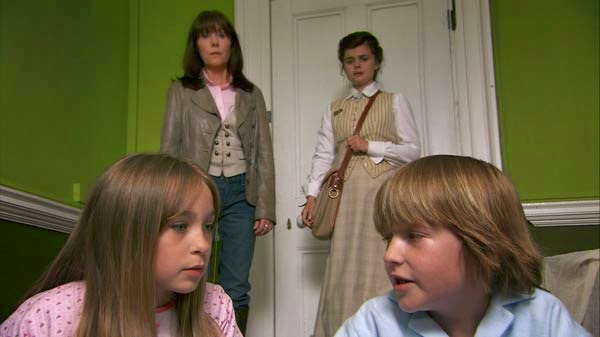 Not much here I'd argue with, except that I'm struggling to see why the mysterious shopkeeper is automatically a racist stereotype, just because the actor happens to be black. Looked to me more like the sort of colour-blind casting that British TV does attempt from time to time (to its credit).

Agreed. Still, I thought this was worthwhile mainly because it canonised Mister Benn as part of the DW universe. Seriously, the shopkeeper has regenerated (like Mels, changing colour as he did so), but he's still the same humanoid plot device. As if by magic...

And agreed. Phil, I need you to be a little more specific about the perceived racist stereotyping here. Yes the shopkeeper was a magical black man but portrayed in a way that (I felt) avoided any stereotypical 'mystical ethnic' or 'noble savage' tropes. Surely the only stereotyping here is, as Elvwood suggests, the children's fiction favourite mysterious shopkeeper trope which is in in fact subverted by having him played by a person of colour. Unless you think showing a black man running a shop is inherently racist. From a British cultural perspective if he'd been Asian then I could see it but here, particularly as the three leads are carefully ethnically and, in Sara Jane's case, age diverse I think you may be seeing something here that is totally unintended. I do think the 'Clyde fights the Nazis' sequence was clumsy though. In a similar way that 'River fights the Nazis' was uncomfortable in LKH. Tarantino pulls off the anachronistic 'let's diss the Nazis' routine in Inglorious Basterds but only by first graphically depicting their atrocities. This cannot be done in the context of Doctor Who or TheSJA (maybe Torchwood could have handled it) because it's tea-time entertainment so ends up just about hitting an Indiana Jones 'Nazis...I hate those guys!' tone.

@elvwood Ha! David McKee should have got royalties :)

Speaking from a position of ignorance (not having seen this), I suspect this may be one of those transatlantic things. Both as an actual feature of cultural production and as a subject of critical discussion, the "magic negro" is such a distinctively American phenomenon (not exclusively*, but distinctively) that I imagine the very fact of casting a black actor as a character of unexplained uncanniness would sound alarm bells in an American viewer in ways that just wouldn't occur to a British one.

It probably also ties into more general questions that have cropped up on this blog before, regarding whether an intrinsically unobjectionable story element becomes objectionable because the demographic categorisation of the characters involved gives it a putative resemblance to common features of other, more objectionable stories, thus arguably tainting it by association. Which is one of those questions that different people are simply going to see differently, in a way not very amenable to persuasion.

But again, I haven't actually seen this, so have no way of knowing that the character portrayal in question is not actually just screamingly racist.

*In the British context for that sort of thing, a Jamaican accent increases the "hmmm" quotient by several thousand per cent. Actually, I can't think of any character portrayal I've seen in British culture that seemed to be swimming in those particular dubious waters without such an accent attached.

Also, thinking about it, in those very occasional British cases the association with the supernatural tends to be a sinister one, whereas in the classic American pattern it's benign, involving connecting white characters to the spiritual, solving their personal problems and what have you.

In the intended series 5 finale The Battle for Bannerman Road, the Shopkeeper would have returned, revealing that he had been manipulated by the Trickster into leaving Sky on Sarah Jane's doorstep. (The Sarah Jane Companion Volume Three)

The Shopkeeper was added to Sky because the original plan for Matt Smith to appear as the Doctor fell through. (The Sarah Jane Companion Volume Three)

According to The Brilliant Book 2012, and a blog post from Neil Gaiman, Gaiman and Russell T Davies were both of the personal opinion that the Shopkeeper was in fact the Corsair, a swashbuckling Time Lord friend of the Doctor's mentioned in TV: The Doctor's Wife.

I must ask seriously, would the character of the Doctor himself be open to accusations of 'Magical Black Man' tropeism if, for example Patterson Joseph took the role?

@Elvwood
Didn't the shopkeeper in Mr Benn wear a fez? I think we may be onto something here.

Anton B, exactly! And his powers were to create portals to other times or worlds, and to appear and disappear "as if by magic". He didn't have a parrot, but maybe he picked it up from the pirate world.

As I understand it - I may not - Joseph or Lester as the Doctor would only be open to accusations of magical black man if there was simultaneously a major shift towards making the white companion the protagonist.

For me, it's the combination of Nri's ethnicity and the fact that the character is dressed and presented as an exotic magical foreigner that made the part cringeworthy

Can I just say, whatever else this episode did or failed to do, it did give us the SJA gang experiencing time travel and as they'll probably never appear on DW proper, and they did chose some pretty cool times.

As with Laight’s previous story

Not related to this entry alone; do you intend to include credits in the book version? There have been a bunch of posts of late that refer in passing to a writer’s surname as though it’s already been established for the reader. Obviously here we can somethingsearch “laight” + “sarah jane” if we care enough, but if someone’s reading their kindle or paper book in the sun...

But surely sometimes an exotic magical foreigner is just that. An exotic foreign person who is magical. Why is that racist or cringeworthy? The character could equally have been played by an exotic white person (think Bilis Manger) but that would then be one less part on British Television for a non-white actor.

As Alwyn points out, the addition of a Jamaican accent would definitely cause a blip on peoples' "RaceDar", but the question there is why should it? For a black character to have an ethnic accent just indicates where that character originates, not that they are a glaring racial stereotype.

How does the panel feel about Nelson the barkeeper from "Life on Mars"?

I'll be honest, I wasn't really familiar with the idea of the 'magic negro' trope until now, but having read up on it, and read the comments of Spike Lee and others about it... I agree with Aylwin, I think this is one of those transatlantic things that get lost in translation. It's pretty much a specific US/Hollywood thing that we don't really have an equivalent of in the UK, so I think accusing the programme makers of using a supposed racial stereotype is misdirected.

It reminds me a little of the complaints some US fans made about Martha's portrayal in Human Nature/Family of Blood - that by having her pose as a maid, the programme makers were forcing the character into a racist stereotype. Which, OK, maybe in US terms... but that ignores the fact that for all our faults, we really don't have the historical/cultural baggage here that associates black women with slaves/servants/maids. If anything we get our ideas of 'servants of the upper classes' from TV dramas like 'Upstairs, Downstairs' (or these days, 'Downton Abbey')... not from 'Gone with the Wind' or the black maid character in Tom & Jerry*. The striking thing about a woman of colour working as a maid in Britain in 1914 isn't that it's a stereotype, it's how unusual it would actually have been.

So I think this one of those things that Americans pick up on as a racist stereotype, and UK viewers just don't, because... it just isn't a stereotype here.

*Tom & Jerry is the one example that young British viewers - at least of my generation - might have been familiar with. But as a kid I just assumed she was Tom's owner/the householder.

I tend to agree that the 'magic negro' is more of an American thing than a UK one. Both in that people in the US are more sensitive to it, but also because it crops up more often in American fiction.

Stephen King has them in a fair few of his books, for example. And once you've had them pointed out to you, it is noticeable that he uses this type of character as a shortcut to highlighting that "ooh, strange things are afoot". Which I suppose, as a white author, is an easy trap to fall into if you're just thinking about things from the POV of your white protagonists. King isn't meaning to be racist, but it is a bit lazy.