Outside the Government: Mark of the Berserker 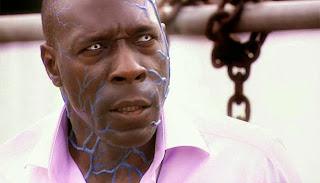 Good article by the way. And yes, powerful story. The point about nothing being owed to the abuser I know well through my partner's experience of a previous abusive marriage.

Just one question - whilst it's really cool to hear the small Fife town of Glenrothes getting a mention, especially off the back of Obama, what's the significance of Lindsay Roy? I looked him up but don't know him well enough.

"I’ve not done any sort of broad survey of children’s media, but the uncompromising message that you owe your abuser nothing is an important one. Even if it is not vanishingly rare in children’s media, it’s too rare in the larger culture."

For all the many things it gets wrong, this is something 'Fear Her' also gets very right.

Anyway, good essay on a very good story. This season, and this story in particular, is where the SJA really came into its own - there was a lot to enjoy about the first season, but this is the point where it starts to make a decent case for itself as a crucial part of the RTD era, as opposed to an entertaining but largely inessential offshoot of it.

And something that "The Idiot's Lantern" gets wrong in a way that really, really irks.

Just what I was thinking as well. "The Idiot's Lantern" is useful in showing a subtle aspect of the Tennant Doctor's arrogance regarding Rose: because Rose has been tragically separated from her father, the Doctor has no qualms with her suggesting that Tommy Connolly keep his clearly abusive father in his life. Rose can do no wrong in his eyes, therefore he accepts her nudging Tommy to re-enter a cycle of parental abuse.

I'm not so sure Idiot's Lantern gets it "wrong" -- because in that story, the possibility of redemption is offered. Not because Eddie is "owed" that possibility, but as a moment of grace. If the man can truly change, it will be to Tommy's benefit, for he'll be able to take that ability to change to heart.

Notably, Rita kicks out Eddie without compromise. She truly doesn't owe him anything. This, then, shows that we have a choice.

Some of the themes in this episode (absent parent, promise of power) are revisited in Enemy of the Bane, but neither episode feels derivative of the other.From a Watsonian perspective, Clyde's response to his dad may have impacted Luke's decision.

I would agree, except that Rose essentially shames Tommy into it, which reinforces the societal notion that outsiders are right to shame abuse victims into forgiving their abusers (And indeed the broader societyal notion that it's cool to manipulate people into doing things they don't want to do for "their own good")

I didn't read it as "shaming" -- because Rose has a great relationship with her father, despite all his faults, and wouldn't want Tommy to miss out on the opportunity.

On the other hand... yeah, a bit... because she bring up Tommy's "saving the world" as context. Even there, I wouldn't say shame, so much as recognizing that if he can save the world, he can surely save his father. But I can see how it comes across that way.

I dunno, Eddie is humbled, defeated, and hence open (I think) to redemption. Isn't Tommy is more magnanimous and heroic for choosing the potential of relationship over closing it out altogether? Maybe I'm misreading it, but I had the impression that it was Rita who really bore the brunt of Eddie's officiousness, not so much Tommy.

Lindsay Roy, MP for Glenrothes, used to be my old art teacher. Thanks for giving him a big up, Dr Sandifer.

So , Danu, why is he significant ?

Hmmm...Well all I can offer is this. He had a penchant for grey 3- piece suits, despite his vivid bushy red beard and hair. A sort of mash-up of Gareth Hunt and Godley - or is it Creme ? He endeared himself to me when he found me reading a copy of the novelization of Dr Who and the Dinosaur Invasion ( KLAAAAK!!!) and using the cover as an example of "careful graphic design" ( sorry, Dr Phil my darling, but in my school - which Lindsay one day became rector of - kicking ANY novel, not just a Dr Who one got you two strokes of 'ra Tash !!! -which is the only time physical punishment didn't deserve opprobrium but a round of applause )

So, is he significant ? Oh yes, in that small town, but influential to the kids he taught way that is celebrated in, say, George Capes movies or, Y'know, Sarah Jane Adventures. So thanks, Mr Roy.

Thanks for that! Great to hear your stories and memories of Mr Roy, very much appreciated. Wonderful having such teachers early in life. I have a great memory of an at teacher called Kim Dalziel in Edinburgh who waxed lyrical about figures such as Vincent van Gogh and the wonders of many arts movements - he just brought it all to life and transferred that passion to me. Nice one, thanks Mr Dalziel.