Outside the Government: Prisoner of the Judoon 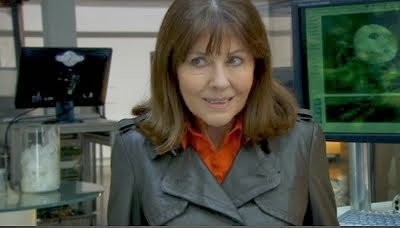 The opening tag is not just on the iTunes version. It's also at the start of every episode on the DVDs and (I believe) on their original transmission.

For what it's worth, I really like it. I find it a much more appropriate sequence to open The Sarah Jane Adventures than the "flying letter vortex". And the moment where Clyde stares right down the barrel of the camera and says "Always" never fails to crack me up.

But it's not in any way a successful reinvention of Torchwood. It's completely unsustainable; a dead-end. At the end of Children of Earth, we have two Torchwood characters actually still alive (plus Rhys). Torchwood itself is blown up, and apparently will not be rebuilt. There's nowhere to go, no show left to have been reinvented. When Torchwood re-emerges, it's this weird hybrid American thing with a far too long season order and lots of Bill Pullman hamming it up in horribly unconvincing ways. After that it dies, probably permanently.

Children of Earth was maybe a brilliant apotheosis, a blowing up of the show and its entire premise that gave us a very great four hours of television. It's not a successful reinvention of Torchwood.

Yup, they started using it as a standard intro. It's really grating, in my opinion, because even newcomers can find out the set-up in pretty much any episode without this tagged on (Mr Smith's a big computer, Sarah has a gang, and they fight aliens).

Ignoring the MD abomination, I'd call Children of Earth a successful finale. I think it should've been Torchwood's finale full stop.

Also, the bit where Tybo remonstrates with his subordinates to break the posted "no entry" sign and let him out is absolutely hilarious.

Due to workload and things, I've had to sit out the Children of Earth discussion, but my roomate and I have been watching it this week (capping our two month & a bit Torchwood marathon). He's never seen any of it before, and I hadn't seen it since it was on. And good lord, is it good. It handily dispenses of all the troublesome cheese while keeping the cheeky humor intact, but feels vital, dangerous, humane and exciting. It's some of the best television that's ever come out of the Doctor Who franchise. And it absolutely should have been the end of Torchwood.

As far as it being a "reinvention" goes, it really works because it keeps the basics of the premise, but puts them into a new format (paranoid conspiracy thriller meets John Wyndam). How it fails as a reinvention is that this format simply can't be repeated without straining credulity, as Miracle Day sadly proved. After this, Torchwood should have either ended entirely (and as far as ending go,Jack leaving planet Earth in disgrace even after having saved us all, and Gwen returning to her everyday life but with her horizons permanently expanded is about as fitting as one can imagine) or, they should have come back with a Series 4 that returned to the anthology format with a mostly new cast in a new location.

I guess that's my basic point - with a television show, which is by definition an ongoing thing, a reinvention has to set up the show to move forward in a new way. That's now what "Children of Earth" does - it sets fire to the basic concept of the show and puts nothing in its place.

But! But! What about my TV writing debut with the Comic Relief mini episode From Raxacoricofallapatorius With Love? A seminal SJA moment, surely? I think I mean seminal...

Nitpick Central: Chipmunk is an "is" not an "are"; there's only the one of him.

I agree with John here. I stayed out of the "Children of Earth" discussion for time reasons, but I didn't like the series, didn't think that it worked over all, and was heartily happy when it blew everything up and was done.

children of earth had plenty of acid in it, and no redemption and like much of Davie's Doctor Who, didn't really have an ending until RTD suddenly said, "Oh, i guess everything is over." and the soldiers just start to walk away. children of Earth came in with nihilism in it's veins and had nothing else to replace it when it bled all that out. thats not a TV show, thats venting.

SJA may have targeted lower, but by continuing, it had the opportunity to make its points on the sly and sometimes do them better by not being so overt. clyde's "Always" in the beginning was so heartfelt, that it echoed how most of us would feel if the TARDIS showed up on our doorstep. We heartily would agree, lets go and get back in time for "stuff". In terms of audience identificiation, he's a less annoying Rose.

In my head, your little skit is called "The Two Ranis". Brilliance.

Also read that an alternative title was "Ron With the Wind" - is that true?

The Season 3 intro is a bit wordy. IIRC they tone it down for Season 4/5.

Thinking about Sarah Jane Adventures, one thing I realized was that there's a paucity of bonus material available compared to an era of Doctor Who. That little amount there is, therefore, I made the conscious decision to hold for the book. Same for Torchwood, hence my not doing Lost Souls.

Anyway, the book bonus essays can drag a bit, since they're almost always on the theme of "here's stuff that wasn't quite a good enough idea to do the first time." They're some of my least favorite things to write. And so when there's something that's both very fun and that I can get away with holding for the book, I am inclined to do so.

Speaking of the spaceship, I suspect this was meant to be seen AFTER "Dreamland," though it ended up airing before.

There was a comment I was going to make at some point during Children of Earth and totally forgot about. Something about how interesting it would be to compare SJA with CoE. The latter was horrific because the premise -- someone is mind-controlling our children and plans to kidnap a percentage of them -- invokes a primal grown-up fear: someone is coming for our kids. If the 456 had instead targeted grown-ups, the premise with minimal tweaking could have been a particularly epic SJA storyline, with kids coming together to save their hypnotized parents.

So there was no backslash backlash?

This is random, and I wish i'd posted it around Day 3, but does it strike anyone that the 456 are RTD's riff of the Rills? Hideous creatures that live behind glass, shrouded in poison fog, and speaking through a voice synthesizer?

The intro was definitely there on original transmission and I always liked it, especially for Clyde's 'Always'.

As others have said, the intro's on the DVDs as well. I find it rather exasperating, but the clips with it serve as as a seasonal overview

Seconded on the lack of bonus material. The Monster Files are rather dull, but at least the series 1 & 2 DVDs have little "explore the attic" bits. Series 3-5 have nothing, not even audio drama clips or trailers. (At least, the American release-- The UK series 4 included Pyramids of Mars as a tribute to Sladen. I suppose copyright issues prevented that from working with Region 1 releases, but given the high cost of Classic dvds in the States...)
And the BBC has no plans to release the complete (1-5) boxed set of SJA in the USA. The BBC has improved the export rate for DW, but they're woefully incompetent at SJA.

I'm hoping that Phil covers the two Series 5 audio adventures that feature Sky as part of the gang? (Not that there's much to say about them but we have so little sense of how Sky functions as a character...)

Er-- not a 'proper' covering, just a touch on, perhaps as a epilogue on 'The Curse of Clyde Langer.'

But The Mountain Goats are an 'are.'

Series 3 has some fun 'interactive' trailers where it's unknown as to whether the postman, the granny or the (someone else, can't recall) is a Slitheen in disguise, IIRC.

And Series 4 has an incredible trailer with SJA enemies talking evil plans, but it turns out it's the SJA gang all having a laugh with some form of perception filter on.

I always loved Gita's utter lunacy - I thought she was pretty fantastic, though utterly unrealistic. Plus, she's basically the first mother character who was supportive from the get-go. In fact, I think Rani is the first character in the RTD universe with two regular supporting characters (I guess you could make the case for Gwen's parents, but they were basically plot functions)

I love Gita. I wants her to show up on a Doctor Who episode during one of those random "The Doctor is thrown in with a grab-bag of humanity" stories with no mention whatsoever of her being Rani's mum.

Your this work is looking awesome thanks for doing this.
Files Tube UK proxy