Outside the Government: The Lost Boy 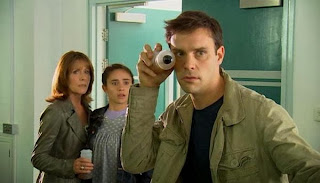 It's November 12th, 2007. Leona Lewis is at number one with "Bleeding Love," where she remains for the next week as well. Alicia Keys, Westlife, Britney Spears, and Timbaland also chart, as well as Kylie Minogue, as part of her comeback after battling cancer. But really, what's that got to do with anything? In news, discussions to form a government of Belgium reach a record hundred and fiftieth day. Large scale student protests break out in Venezuela over a referendum to give Hugo Chavez more power. Benazir Bhutto spends a day under house arrest, Barry Bonds is indicted for perjury, and nobody else with an alliterative B name does anything that would allow me to complete this joke.

While on television, season one of The Sarah Jane Adventures wraps up with The Lost Boy. The Lost Boy is a standard issue season finale for Doctor Who in this period. The premises of the series unravel; everything that can possibly go wrong does, followed by several more things going wrong, and it ends with a big action set piece resolved by what people widely and wrongly refer to as a deus ex machina. (In this case, it’s much more of a machina ex machina.) Unlike the last two attempts at one - End of Days and Last of the Time Lords - The Lost Boy largely comes off.

The basic mechanics of The Sarah Jane Adventures as it understands itself in its first season are on full display here. At its heart, this is a story about adoption. Its central anxiety is a familiar one for any adopted child - the nature of the birth parents. Luke goes through the nightmare scenario here - his apparent birth parents show up to take him away, and they really don’t love him. (I mean, not only do they lock him in a room, but it’s a room covered in Chelsea merchandise.)

This gets paralleled in the Alan/Maria story, as Alan has to figure out how to be a father to a very different sort of daughter than he expected. Throughout the story, in other words, we have a struggle to make families work. Not to form them, but to get them to work. And to get them to work in two specific and common cases of slightly non-standard families. Sarah Jane has to show that she’s legitimately Luke’s mother, and Alan has to show that he can serve as the sole parent for Maria (a point hammered home by Chrissie showing up to be useless bordering on malevolent). In both cases, parents have to demonstrate that they deserve their role as parents. But in typical Sarah Jane Adventures style, this is not the occasion for an overwrought meditation on family.

Indeed, the plot takes pains to avoid any sort of realist setting. The sequence where Luke is taken from Sarah Jane adheres to no real-world logic to speak of. Particularly visible is the fact that nobody seems to think that there’s anything suspicious about Sarah Jane having Luke until it becomes clear that Luke has no memory of anything about his supposed life as Ashley. This constitutes a conscious decision not to do the scene in what would be televisually normal - SWAT teams grabbing Luke at gunpoint and all that. The reasons are obvious - that would be more than a bit too much for children’s telly, but the decision is still significant in terms of the remove it moves the emphasis away from the real-world issues that Luke’s situation echoes. Instead it focuses on the really key horror - that nobody involved in the situation is listening to Luke. (And in the more utopian case of Alan and Maria, the reason Alan is visibly a fantastic dad is that when faced with the knowledge of aliens and saving the world, he ultimately does listen to Maria, scary and hard as that is for him.)

So even if they’re not explored in depth, the issues are still there, just as, for example, the Blair governments were still visibly present in The Sound of Drums. This is how The Sarah Jane Adventures works - it takes childhood anxieties and experiences and builds stories out of them. Not in the old Terror of the Autons sense of “what if your teddy bear came alive and tried to stab you to death in your sleep,” but in the sense of emotional anxieties. This has been the underlying premise of Luke through the entire series - he’s a vehicle for exploring the fear of not fitting in and of social awkwardness. By bringing the perspective of someone who exists outside contemporary British culture he gets to embody the anxiety of trying to make friends and navigate the social scene. As ever, this is never done preachily - the first season avoids ever building an episode around Luke learning social niceties. Instead Luke just serves as a vehicle for building stories out of those concerns. The one time the consequences of one of his social blunders really play into the story - Revenge of the Slitheen - is pointedly a blunder that is thoroughly outside the realm of what anyone in the audience can actually do. (It is very difficult, in the course of an even remotely normal school day, to inadvertently help aliens destroy the planet.)

And so while The Lost Boy starts from the position of exploring anxieties over adoption, it quickly jettisons all of that in favor of bringing back the Slitheen. It’s worth looking at the cliffhanger in this regard, as it’s a beautifully succinct version of the fake build that Davies uses to such effect in Army of Ghosts and Bad Wolf. Throughout the episode we’re clearly building to the revelation of what’s up with Luke’s supposed parents. We get tipped off that they’re evil quite early in the episode when they start talking to their glowing green television about having found the boy. Even still, the revelation that they’re Slitheen is a bit of cheeky brilliance, since the show has casually jettisoned the two standard markers of the Slitheen: fat people who fart. (And thank God, as the Slitheen were rapidly becoming an really unfortunate joke at the expense of fat people.) That revelation is good enough to be a cliffhanger - in fact, it’s an even better shock Slitheen reveal than the cliffhanger of Revenge of the Slitheen, which uses the same structure. (We know it’s Slitheen, so the revelation of that isn’t a shock. The revelation that the kid is a Slitheen, on the other hand, is.)

But this isn’t even the real cliffhanger; the real cliffhanger is that Mr. Smith is evil. This is a solid twist, as they go. It comes thoroughly out of left field, but equally, plays fair; we never really question Mr. Smith, as he’s firmly within the rules of the narrative. (Indeed, Sarah Jane keeps him after this story.) But he’s not actually a pre-established part of Sarah Jane’s premise. Indeed, he’s in many ways visibly a hastily added cheat to get around the fact that there were rights difficulties with K-9 (Bob Baker was shopping him around for his own spin-off series, which we’ll reluctantly cover when the time comes). Within the proper rules of Sarah Jane, all of Mr. Smith’s “giving Sarah Jane information beyond what she should have on her own” functions ought to go to K-9 anyway, as should the “analyze various random objects” work. And so Mr. Smith is ever so slightly wrong - a point of inadequacy ripe for subverting into villainy.

Fittingly, then, it’s K-9 who provides the restoration of order. It had to be, of course. In a show that is as much about the way in which Doctor Who mediates between the older and younger generations as The Sarah Jane Adventures, it’s inevitable that the big, climactic crisis be averted with some bit of the classic series. And, perhaps more to the point, it’s inevitable that it be K-9, who is both infamously naff and famously a kid favorite. In other words, what saves the day isn’t just your parents’ Doctor Who, but the bit of your parents’ Doctor Who that was made for them when they were kids.

This is at once terribly bold and terribly honest. What ultimately serves to reunite Luke with his real mother is Doctor Who. This is at the heart of what The Sarah Jane Adventures tries to be. It’s about the way in which it’s going to be experienced: by anorak parents sitting down and watching with their Doctor Who-loving kids. In many ways, then, the point of The Sarah Jane Adventures, thus far, is to comment on the myth that Doctor Who is children’s television. Because as we’ve already said, it’s not; not really. It’s for children, yes, but only as one audience. The point of Doctor Who is that it’s for children and adults. And in the final episodes of its first season, The Sarah Jane adventures finally hits this theme in the most emphatic way possible as Doctor Who becomes something that literally brings families together.

"Bob Baker was shopping him around for his own spin-off series, which we’ll reluctantly cover when the time comes."

I expect nothing less than a 2000 word essay on every episode, with additional essays in the book edition : ).

Real interesting title for the episode, considering the kind of stuff there was in the last one.

I actually quite liked the K9 series. It had its faults .. huge, near-premise-destroying faults, but it was fun. And it was kind of amusing that you could match the main characters 1:1 with SJA, allowing for a gender-flip of Sarah herself.

I kinda liked the robot cops though. The setting had a delightfully schizophrenic Victorian London-meets-Cyberpunk thing going on.

Sadly, no comments on the departure of the delightful Yasmin Paige, who I thought was the strongest of the teen actors. I also liked the idea of Alan taking on the role of Sarah Jane's "sidekick," but twas not to be.

Well, the departure doesn't officially happen until the next episode.

For anyone who didn't realise, your Yasmin Paige fix can be found in the rather wonderful BBC comedy series "Pramface".

For an afterthought Mr Smith was wonderfully realised: the grandiose fanfare, the spectacular revelation as he unfolds and stretches out from his hiding place, the kid actors initial jaw-drop reactions, Mr Smiths own rich but understated voice and Sarah Janes unquestioning reliance on him all made Mr Smith's betrayal so very delicious.

They did a wonderful job of shooting him opening out - it heavily screams "be impressed!", and the revelation in "The Stolen Earth" that Mister Smith's fanfare is diegetic suggests Mr Smith is intentionally going for impressive, which suits his character very well.

While I always had trouble getting to watch complete SJA two-parters, this episode got me firmly on board with it as a show worth my time.

Sounds similar to Terry Nation taking the Daleks and running away to America to make millions from a spinoff show that never happened, which resulted in the Cybermen becoming the go-to monsters of the Troughton era because its producers weren't creative enough to break out of the 'scary monsters' story mode unless David Whitaker, Robert Holmes, or Malcolm Hulke were writing.

Except Bob Baker actually ended making his thoroughly mediocre show, and making some manner of money from it.

(previous post didn't go through, apparently) No matter what the actual mechanics of how it would have played out, the moment when Sarah Jane has to walk away and leave Luke with someone else was brilliantly played, because Elisabeth Sladen managed to pull off "trying to be happy but breaking down" in a realistic way.