Outside the Government: The New World 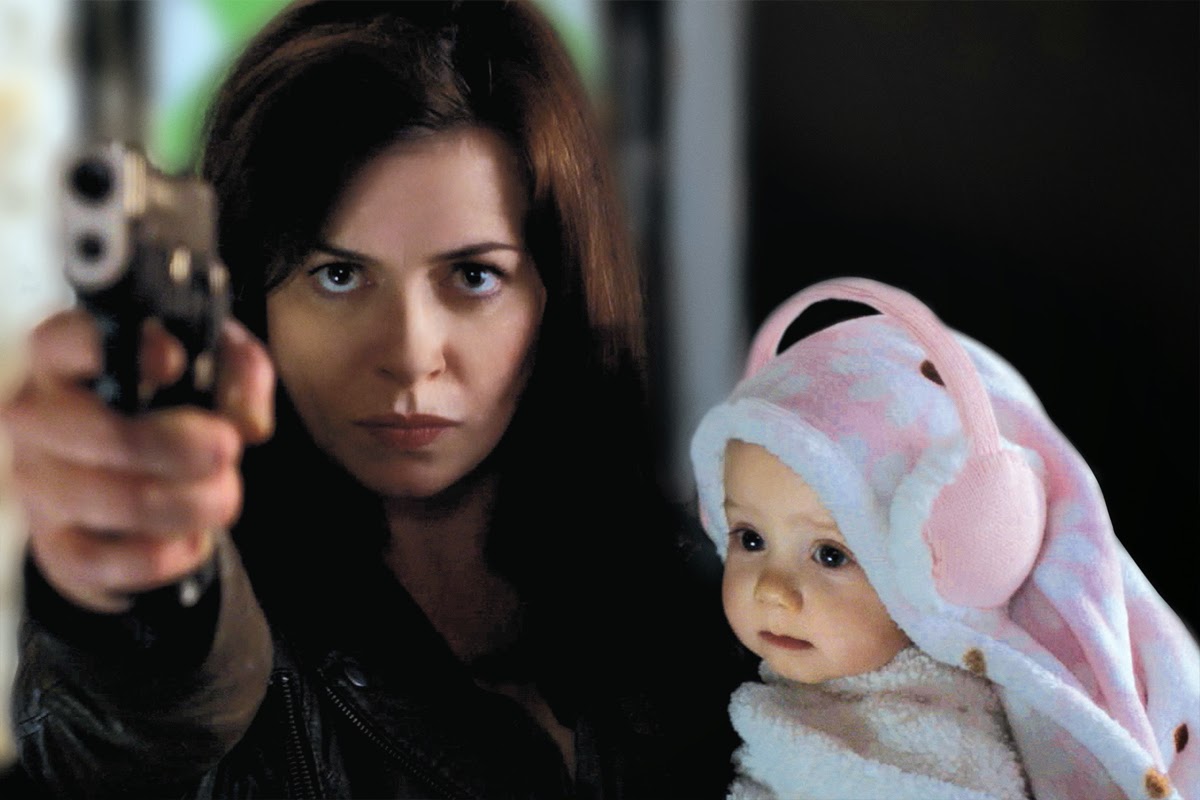 Will you be doing the Web of Lies animated spin-off or the "The Lost Files" Radio 4 series which was broadcast as a run-in to Miracle Day? I'd love to know what you make of House of the Dead.

Yeah, that mid Series 6 break was tough, but I'm really wishing we had something like this to fill the gap between Time of the Doctor and Deep Breath.

We've had Game of Thrones and Orphan Black. ;)

Both excellent shows. There's a lot of great stuff to watch, but I do miss Doctor Who and Doctor Who related shows.

I was leafing through The Writer's Tale at the weekend and came across the bit where RTD describes receiving the Children of Earth scripts from John Fay and James Moran. He says that because he works so much on instinct now he was only able to wrestle the story into a coherent whole and really discover its themes when he had all the scripts together like that and he could edit at will. I assume that for (completely understandable) external reasons Russell wasn't able to undertake the same process with the Miracle Day scripts, and so sadly we're left with this rather incoherent stretched-out mess.

Anyway, I respect your attempt to at least try to find a redemptive reading. Good luck!

The reference to magical realism is something I expected you'd go through when you got to Miracle Day, as I found this both an extremely interesting and equally frustrating element of the season. Miracle Day has basically the same premise as Death With Interruptions one of the last novels of Jose Saramago, and was developed a couple of years after the release of the film version of his novel Blindness.

And while Blindness was an interesting film, it proved just how many core aspects of Saramago's writing can't really be transmitted to visual media, particularly his reliance on the functional nature of his characters, which rarely have names, and whose singularity is constructed from an assembly of attributes and actions. When Julianne Moore and Mark Ruffalo are playing these characters that are assembled from functions, their identities are obvious and clear.

So in adapting the central idea from a late Saramago masterpiece, Davies and Gardner mutate the concept into the camp action sci-fi of Torchwood. You could think of Rex, Esther, and Danes' programmatic natures as an attempt to adapt the functionality of Saramago's characters: "the hotheaded but brilliant agent and his overly patient and meek female assistant" and the "cracked mirror representation of American culture." We already know Jack, Gwen, and Rhys well enough as personal characters that they're our guides into this twisted thematic adaptation, as the context of Torchwood explores the more violent, terrifying aspects of the premise that in Saramago's hands was giddily cynical but also warmly redemptive.

Of course, if the series had actually achieved any of this, we'd probably be just wrapping up Torchwood's sixth season, having migrated to Netflix original productions, complaining that the new season of Orange Is the New Black has overshadowed it.

Watched over ten - was it ten? - interminable weeks was soul-sapping in the extreme. Able to re-watch it over a few nights on DVD, I found it much more palatable. Not good, I hasten to add, but palatable.

It's one of the least episodic TV shows I've ever seen (the Jack flashback episode aside). It felt very much like "is that 50 minutes of material yet? OK, cut there". So I can see how it would work better in quick succession.

Your description of the tiers of American cable is puzzling to me. BBC America is a basic cable channel, just one that's not available on all cable packages. That's a completely different thing from a premium cable channel, which is available to people who subscribe to it specifically.

Saramago's prose style, being largely based around the ironic misuse of cliches to convey the inability of bureaucracies to deal with actual facts, is also untranslatable. The kinds of television that Torchwood could most easily satirise as incapable of dealing with inconvenient realities - CSI, 24 - are visually highly innovative.

I was just about to post something like this--it very much depends on privider. My family gets BBCA at second tier, but no HBO or Starz or the like. However, my grandparents get BBCA at the most basic cable package.

Looking at the price tiers for where I live...

The most basic cable package runs $29.95 a month, and includes SyFy but not BBC America. BBC America shows up at a $49.99 a month package.

HBO, Starz or whatever can be added to either of these packages for $10.

All of those are promotional prices that expire after a year and then jump by $10-15.

I think these are thus meaningfully distinguished as types of channels.

Mind you, Torchwood do enjoy shooting at shit in general, so it fits.

I don't think this means, however, that channels like BBC America are any more "premium" than channels like Comedy Central, just more niche. I suspect BBCA would eventually move to the basic tier if there was enough demand for it. Channels like HBO, Showtime, and even Starz are a different category. You specifically add HBO, where you might get BBCA because you moved up a level to get TCM (which is why I had it when I had cable).

You might get BBCA as one of a number of channels, I meant to say.

House of the Dead was the one set in India, wasn't it? Man, those radio plays were so much better than the Torchwood TV series, Children of Earth excepted. I suppose because they couldn't shove alien pheromone date-rape tee hee hee into something intended for the Radio 4 audience.

Well, there was the Musketeers, if you wanted to see Capaldi.

Well, to be fair, if there was an occasion Torchwood had to shoot at a heilcopter, it would have taken out half of Cardiff.

Er, yeah we do know what cable TV is in Britain, thanks. Was very popular in the late 90s. MicroSoft invested heavily in British cable TV during the dot com boom.
As for the outsider view of America angle, that's interesting and reminds me of why I like Danny Cannon's 1995 Judge Dredd movie, in which all the characters seem to be living out particular American fantasies. Fargo, initially the wise political leader in the Lincoln mold must be a Western fan, as he attempts unsuccessfully to embody The Man With No Name in the Wild West/Cursed Earth. Meanwhile, the cadets who clear Dredd's name appear to have grown up with reruns of ST:TNG. I thought it was a bold, fresh look at America.

Miracle Day I thought was an interesting take of conspiracy theory mythology, a theme Davies explored previously in Alien of London and The Long Game, as well as a admittedly unsubtle reminder of how we are a hairs breadth from fascism (cf Turn Left). I also found it very entertaining, in a morbid kind of way. I don't get the hate for it.

I found this first episode an odd one. As I had a pretty sense of the US from outside as an avid watcher of many shows, and from inside as a visitor. As a character I was switched off by Rex and there was not enough substance in the female assistant (can't recall her name) for me. It seemed that there was potentially something interesting in the premise that could build somewhere, but this episode only appeared to build to the climax of a helicopter explosion, and as a result felt a bit flatter than it could have been. Still sort of liked it.

The channel is "premium" in that you have to pay a premium to get it. It isn't merely more "niche", in that you can choose one package that includes it versus another that excludes it but includes something else. There is no option for not paying for, say, a dozen sports channels I don't watch and getting science fiction and drama stations instead. You have to buy a package, which will include a lot of channels you don't want, in order to get the handful you do want.


Which means that not only is moving the show from a lower tier of cable to a higher one cutting the audience, it is also changing the demographics of the audience. The show becomes one for the rich, those who can afford to pay extra to see it.

The only good thing I can remember about the show was the end of the episode when they'd landed in America and having broken Dichen Lachman's character's neck on the plane they see her walking after them with her neck at an impossible angle. The awkward looks as they drive past her trying not to make eye contact with her was great visual comedy.

Apart from that the only real comment I have about Miracle Day was that it was just too long. Would have prefered 2 or 3 stories told over a few episodes each. Ultimately if you're telling a story over 10 episodes you really should have 10 different interesting things to say about it. MD sort of runs out of steam about half way thru.

Thinking more about the significance of this season of Torchwood being on Starz.

It feels somewhat as if there is a fundamental disconnect between the mission of the BBC and the mission of Starz. The BBC is charged with making quality programming for the general British audience. It's an essentially democratic goal - quality TV for everyone.

Starz works by making television that will attract a small number of people who are both willing and able to pay a premium to get what they want. It's an essentially elitist endeavor.

When PBS works with the BBC to make television, there is a harmony in their goals. Both are public television, with a similar goal of providing a certain type of quality for a general audience.

When BBCA works with the BBC, there is a harmony of goals as well, because BBCA is essentially there to be a cheering squad for the BBC - it's for people in the US who like what the BBC is doing, and therefore supporting more of the same. Ratifying the BBC's mission and methods as interesting even outside Britain.

For neither PBS nor BBCA is the goal ever to make something that is more like US commercial television.

So I suspect that there was a fairly strong culture-clash between the people of the BBC and the people of Starz, rather than the clear affection that BBCA has for the BBC, or the established relationship of shared goals and collaboration between PBS and the BBC.

Now. House of the Dead was something else, but to explain would be a massive spoiler which destroys the whole thing put is pertinent in relation to Miracle Day.