Outside the Government: Torchwood: Children of Earth: Day Five 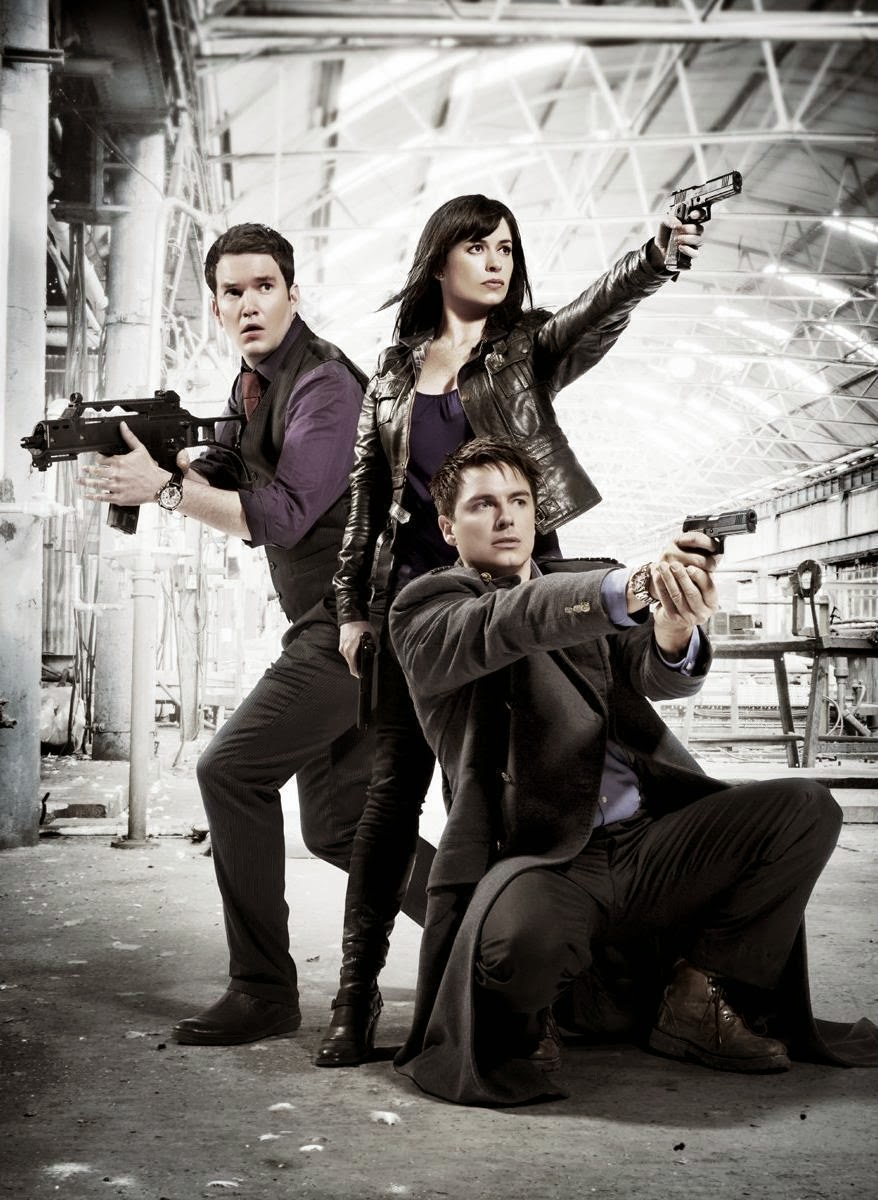 FWIW, I believe Jack should've been last seen here -- and that he shouldn't have been in The End of Time. It would've had more impact, I think. Even when the Doctor gets to go and say goodbye, Jack is nowhere to be found.

It is, in the end, a sort of ultimate hedonism - one that respects life because of the possibilities it offers.

Not sure I'm sold on that point. If more people can get married but no one has to, that's more possibilities, not fewer.

It's a very interesting scene, though, in the context of Phil just wrote. Jack is sitting in a bar nursing a drink, moping, which is practically the antithesis of his "queer ideology." And then the Doctor comes in and hooks him up with Alonso (whose name sounds very much like the Doctor's catchphrase) and this functions as a moment of grace, affirming the hedonistic position and Jack's place in it.

What I most like this story for is its relentless ambiguity. Jack's attempt at heroism accomplishes nothing but getting people killed, Frobisher's moment of "heroism" turns tragic as Jack renders it unnecessary by reproducing it in miniature, and Gwen the optimist tearfully writes off humanity just before Jack saves it by taking leave of his own.

Some of those ambiguities offer interpretations that challenge the thru-narrative on offer here. Is Jack's leap off the planet and into hedonism a triumphal embrace of his own queer status? Or is it the desperate act of a man unable to commit suicide? Or is it because of his unwillingness to face Gwen, heart of the team and mother of a child he saved, because of how closely she reminds him of the daughter he betrayed?

And Gwen's own little family introduces an ambiguity into Jack's actions that so dangerously undermines the rejection of reproductive futurity that Gwen had to be almost entirely excised from the long essay: with Ianto gone, Jack's only queer/chosen family left is Gwen. His reproductive daughter represents a non-queer alternate, certainly, but both families offer a reproductive future to him. Unsurprisingly, Jack picks Gwen over the daughter he barely considers family, the daughter he may only reconcile with on Gwen's behalf. The grandson is almost incidental, but the daughter Jack chose versus the daughter he (re)produced are pretty clearly brought into comparative conjunction, and the narrative encourages us to think Jack's chosen to protect his own heteronormative family first when he's keeping them close for a very different reason.

I'd have been interested to read a comparison between this situation and the Problem of Susan, where the Doctor leaves behind his own(?) granddaughter in favor of the surrogate family he and the TARDIS choose for him. I certainly think that Day of the Doctor is as much about addressing the Problem of Susan in a different form as it is a decision to enscribe Gallifrey within the strictures of reproductive futurity...

Is Ten's trip through memory lane another example of selfless hedonism? That could redeem it from accusations that it's self-indulgent grandstanding.

Particularly so if you give credence to the popular fan theory that by delaying his regeneration long enough to "get [his] reward," he caused the regeneration itself to be more destructive than normal, with nearly fatal results for his successor.

Whoops. Fixed. At least that one actually strengthens my argument instead of weakening it.

The gay culture opposition to gay marriage is that the institutional reform would make homosexuals straight. Not in the sense that they'd have an opposite-focussed sexuality like the majority, but that gay culture would no longer challenge the mainstream. That perspective sees no victory in gay culture letting itself be enfolded into the cultural conservatism that once oppressed them so vigorously.

Well yes, that was the point I was trying to make - both camps agree on what they think the objective of same sex marriage is, which is why one wants it and the other doesn't.

I rewatched School Reunion recently so I view Ten's 'world tour' in the context of his admission to Sarah Jane that he had been wrong to not look her up. Doubly so since the Doctor's comments on SJA where he reveals that he actually looked in on EVERY prior companion during his world tour -- it was a reward... but also a sort of penance.

Just thinking that there are some interesting mirrors here in the choices made by Jack and the Prime Minister. I have been involved at various times in the gay/queer culture and the hedonistic impulse present as part of that. I do celebrate and champion all that hedonism can represent - read some of Derek Jarman's personal writings to hear some amazing things said about this - there is though I feel a shadow that can be present in hedonistic choices. I am not making a statement that this is total truth, but that it is possible for a disregard for the wellbeing of others, or even for who other people are can arise as a behaviour trait in the gay culture - I have experienced it. I am sure RTD knows of this possibility in some cruising around Canal Street, such Stuart in Queer as Folk - and this thread is also woven through Jack I feel. This for me is the perfect thread to understand how the fun, frolicking Jack translates quite easily into the Dark Jack on CoE - where unlike the Prime Minister he at least was able to face the consequences of his choices and still set himself free at the same time.

Why would we give credence to popular fan theories?

I am not sure one can really say that Moffat's take on the series qualifies as reproductive futurism, if the future is a place where our children are and we're not. In the case of Amy and River, if anything the reverse is true.

Well, yes, I was just elaborating on your point.

I know it's ridiculously late after the post to make this comment, but the idea only just occurred to me this morning. The concept of reproductive futurism could function in the ongoing narrative of Doctor Who's creation as a philosophical way to engage with the popular denunciation of Moffat's version of the show as sexist or heteronormative. The over-arching narrative of the Pond era (The Eleventh Hour to Angels in Manhattan) was the time-twisting assembly of the Doctor's family: his wife and her parents, his friends. After the era of Davies' embrace of gay culture, lifestyles, characters, and iconography into the show, this focus on what (aside from the timey-wimey-ness) was a pair of ordinary straight couples was the reason for the most verbally violent insults to Moffat and his vision of Doctor Who.

I'm not myself too familiar with Lee Edelman's work, but I do know that he considers reproductive futurism to be a philosophy of oppression and violence against alternative sexualities that don't result in the creation of children. That philosophy articulates the anti-Moffat rage in a more intelligent way than the collective screams of a hundred angry Tumblr posts. So it would let you respond in a more coherent way than typical Tumblr discourse allows, and speak directly to the ideas underlying their concerns. As excellent as your Definitive Moffat and Feminism post was, it didn't yet dig into the argumentative and rhetorical dirt.