Outside the Government: Torchwood: Children of Earth: Day One

The Last War in Albion will run tomorrow - scheduling snafu meant I failed to get it imaged up in time. Though frankly, this is not as dissimilar as TARDIS Eruditorum sometimes is. 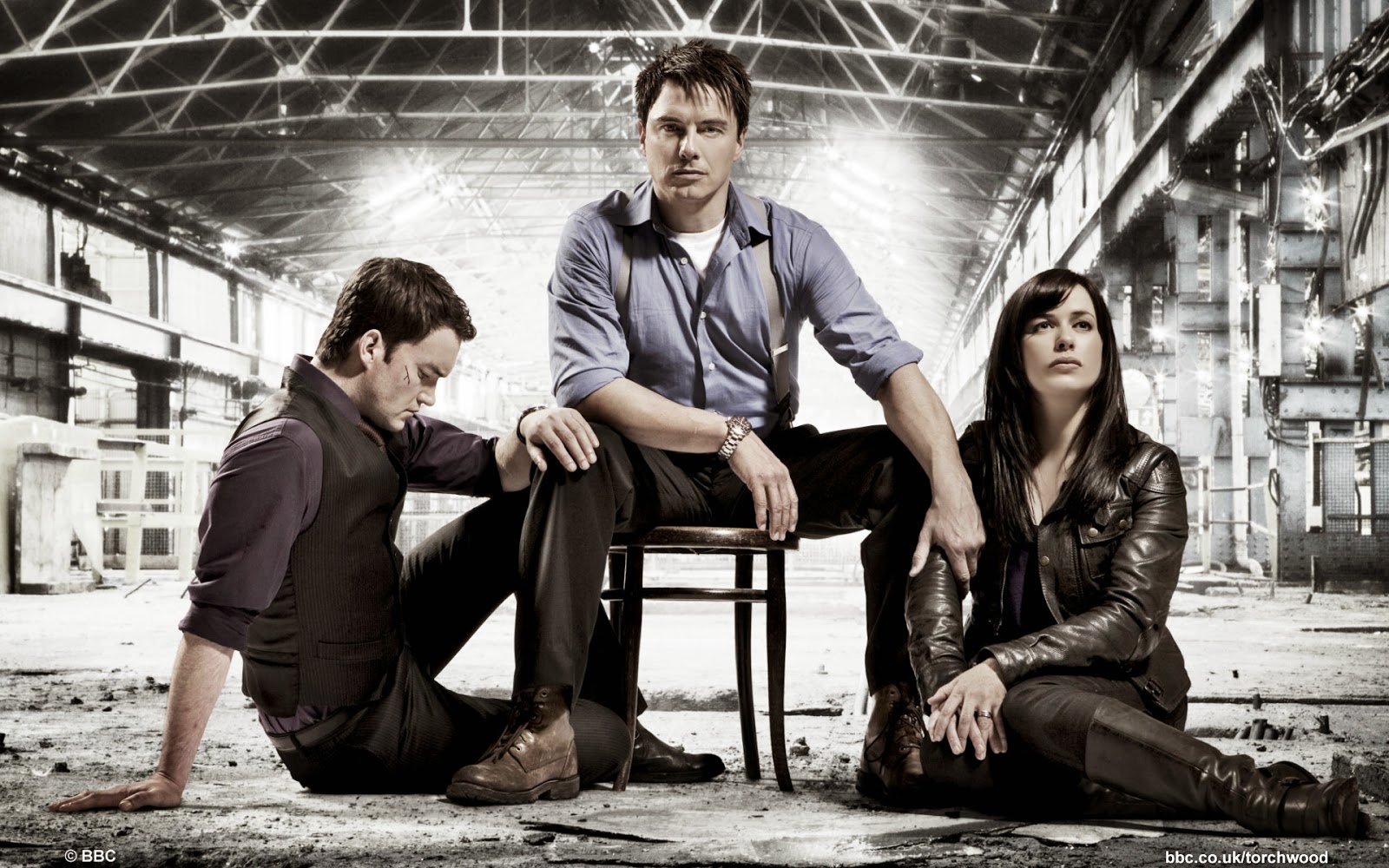 But, more crucially and more fascinatingly, takes off the trappings of his police uniform before joining in. There’s so much that’s interesting wrapped up in this gesture. The strange relationship it suggests between Andy’s senses of duty - the idea that he (on a personal level) cannot bring himself to resist the state while also wearing its uniform - is wonderfully revealing for Andy’s character. That he respects what his uniform stands for too much to wear it while rioting speaks volumes.

During the Occupy protests, there was a fairly infamous picture of a senior police official caught right in the middle of throwing a punch at an unarmed protester. The look in his eyes is murderous rage. I remember a discussion about that incident, and someone who was sympathetic to The Man was insisting that the picture was biased and we couldn't see that maybe the person he was punching had thrown a brick at him and how did we know he wasn't in fear for his life and isn't it perfectly understandable and human that in a tense situation someone like that might get all worked up.

And the thing that occurred to me at the time was this: maybe the officer did feel threatened. Maybe he was frightened. Maybe his reaction was perfectly human and natural and understandable under the circumstances. But he was wearing a police uniform. That uniform gave him certain legal rights that the rest of us do not have. He can detain people against their will. Legally compell them to obey certain orders. Confiscate their property. Under certain circumstances, take their lives. And the deal we made with him, as a society, is that in exchange for the legal authority to do those things, he will use those powers in the execution of his duty and not fly into a murderous rage even under provocation. And if, under provocation he wishes to fly into such a rage, that may be entirely understandable and natural and human, but he's not keeping up his end of the deal, and if he isn't going to keep up his end of the deal, nothing else on earth gives him the right to use the powers granted to a police officer.

Can anyone else see Katie Hopkins at that table, gladly offering up suggestions of which undesirable children to hand over to the 456?

Did Phil deliberately omit the expenses scandal from his roundup of the news? Because that filled the media for weeks. And Torchwood benefitted from that piece of timing. Russell Davies said over the week Torchwood was broadcast that he'd thought he depiction of the political classes was over the top and then the news of the expenses scandal broke and he decided they really were that corrupt.
That said, I think the expenses scandal was far more important as a media event than as an actual example of wrongdoing. I'd far rather have a political class that pushed the boundaries of their expenses and actually paid benefits to people with disabilities, than a political class that was completely scrupulous in the little things and grossly heartless in its treatment of people in need.

One of the awful things about the expenses scandal is that the Telegraph managed to spin it in such a way that the Tories, who were really the worst offenders (e.g. one of them claimed a new duckpond on expenses), managed to benefit from the mood of disillusion with the political classes.

The Tories may have had the most colourful abuses, but I don't think you can reasonably say they were the worst offenders. Of the eight parliamentarians convicted of fraud as a result of the expenses scandal, six were Labour MPs and two were Conservative peers.

dm, your observation is probably going to be lost on non-UK readers but yes. Yes I can.

Hopkins is the flip side of the 'only obeying orders' fascist. She supplies the rhetoric which might inform those orders all the while under the guise of providing diverting 'controversial views' on daytime TV. The US has Shock Jocks and the Tea Party, we get Katie Hopkins. Her sneeringly personal top-down class war should be a sign, along with Michael Gove's cynical dismantling of the Education system through brow beating teachers with stats and over assesment and the Con Dem coalition's destruction of the NHS that the multi-cultural classless society we were sold in the late nineties and early 2000s has been well and truly exposed as the pop culture veneer it always was. l'd love to see the Capaldi era Doctor Who tackle that.

In related news... how appropriate it is that Ben Wheatley, acclaimed director and soon-to-be-director of two of Doctor Who's Series 8 episodes, gets to do what we here would probably call the non-panto adaptation of J.G. Ballard's High Rise.

So, no outrage or accusations of misogyny against Davies for Gwen's pregnancy?

Unfortunately for us Tories, it ended the careers of some of our MPs. I remember at the time feeling like the Daily Telegraph had betrayed the party I loved and which I thought they supported.

I can't tell if this comment is serious or not...

The fallout from the expenses scandal is still going on; it was only last year that the MPs were complaining about the new procedures that were in place to prevent it happening again.

Amazingly, their outrage that the system (according to them) automatically distrusts their claims and assumes they're guilty of fraud until they prove their innocence does not appear to have affected policy in any broadly similarly areas...

Perhaps it's because it's juxtaposed with Jack's "pregnancy"?

Contrast this with Nolan's last Batman film - the scene where the policeman lovingly puts on his uniform to do battle with the Occupy scum...

Roughly a third of British adults support the Conservative party. You're bound to bump into the odd one now and again.

When leaving a demo my wife and children witnessed a police officer being terrifyingly aggressive towards a father with a younger child who were just waiting for the bus - so much so that another policeman (who was obviously shocked by this) got in between them and forced his colleague to back off. So, thank you to that officer who was acting to protect members of the public, rather than allowing himself to see anyone who opposes the status quo as worse than criminal, deserving neither respect nor basic human rights. Ross, your analysis gives me a better handle on why this feels so much more wrong than a similar altercation between members of the general public.

"We'll take the Sharmaines, the Chardonnays, the Tylers, the underperformers and the kids with parents on benefits. Let's face it, you're afraid to say it but you know it's true- they're just holding us back. The 456 is doing us a favour, thank god someone is at last standing up for Hard Working Britons!"

Oh, and of course Gwen has to be told about her pregnancy by a man, who grabs her against her will.

And the deal we made with him, as a society, is that in exchange for the legal authority to do those things, he will use those powers in the execution of his duty

I'm generally sympathetic to your remarks, except that:

a) We never made this deal.

b) We shouldn't make this deal.

c) We couldn't make this deal.

I'll just say the obvious - Capaldi is stunning in this.

I enjoyed your post, Philip. However, I disagreed with your characterisation of Frobisher as the lead villain, a man whose appalling acts are defined by his smallness. I think that the role of lead villain is firmly occupied by the prime minister, Mr Green. He is the man who gives the orders which Frobisher implements. Green is not a morally complex character. He is a narcissist and a sociopath. His unrelenting pursuit of self-interest is evident throughout; he is a man whose only response to the actions of the 456 is to concern himself with self-protection. Telling, he is able to say when it is all over, that it has been "a good day" because he believes he can pass responsibility to the American General. He demonstrates his monolithic indifference to others when he tells Frobisher to sacrifice his children to the 456 for essentially cosmetic reasons (so that the Government can be seen to have suffered loss). He does so having seen what the 456 do to the children they take. He is indifferent to the impact on Frobisher who has likewise seen this. Even as he tells Frobisher to sacrifice his children, he emphasises his own importance with the repeated refrain of how busy he is. He is not in any way morally challenging. Just as I am not challenged by a Davros or a Sutekh precisely because their evil is so monumental that there is no circumstance in which I could imagine being like them, so I am not challenged by Green. Indeed, characters of this sort invite moral complacency; no matter what petty, venal wrongdoings I commit, I am not in their league.

Frobisher is not then the lead villain. Rather, he is the lead henchman. He is essentially a decent man. We are repeatedly shown that he is a kind and loving, if undemonstrative, husband and father. He is someone who has, in the past, supported Torchwood. Gwen describes him as their man in the government. He was not implicated in the events of 1965; he was too young to have been involved. Had the 456 not returned, the likelihood is that Frobisher would have led a blameless, if unremarkable life. In her elegy for him, Bridget Spears stresses his decency, hard work and essential goodness. It is precisely because he is, essentially, a good man that Frobisher poses a profound moral challenge. He presents profound questions about the capacity of each of us to collude with evil when our own safety/way of live is threatened. The question is particularly resonant for me because of my family history. My grandfather was a German Jew. My grandmother was also German but not Jewish. They fled in 1938 because, under the race laws of the Nazi era, their relationship was a criminal offence. I grew up with the stories of good people they had known who colluded with the Nazis not because they liked or agreed with them but because they were scared, because they wanted to protect themselves and their families. Like most people, I suspect, I like to think of myself as essentially good. I like to think that I would not collude with facism or the 456, but a small part of me looks at Frobisher and wonders what I would do in his place.

The point is made even more potent for me by the scenes in the cabinet office when they discuss the criteria for selecting which children should be offered to the 456. The terrible thing about the criteria they finally choose, the lowest performing 10%, is not just that it is fascistic - that would be easy - but that it makes sense. I am a liberal. My liberalism shapes my view of the world. I believe in an inclusive, tolerant, diverse society. I believe in the fundamental worth of every human being. That is not just what I believe; it is who I am, the core of my identity. The scene in the cabinet room horrifies me precisely because it challenges my moral complacency, my belief that I am a good person, as I find myself drawn into agreement with the hideous logic of their solution.