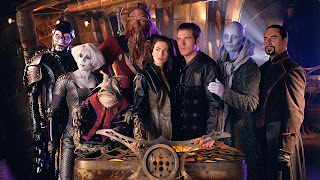 aka ETHER 6 years, 6 months ago

Thank you for posting such a beautiful handful of the reasons why Farscape is my absolute favorite show :)

Claudia Black is a glue holding the show together. She's at the center of the narrative, the character with the most prolonged arc. Unquestionably the best and most versatile actor of the bunch. I get the sense the showrunners didn't quite grasp what they had on their hands in season one. Here's this pokey actress from Australian soaps with a repertoire theater background who specialized in dying messily in b-horror flicks. Once they realized they had caught lightning in a bottle, the whole show was transformed.

Personally, watched a few seconds of one of her featurettes on youtube and thought, "I've got to see this show."

"Crichton and the Doctor are intrinsically human, and they both take us on a journey through the universe, inviting us to 'look upward, and share the wonders [they have] seen.'"

Or, sometimes, look down:

The thing I love about Farscape is that, more than any other series that I can think of, it successfully balances fist-pumping kiss-kiss-bang-bang action with a grounded sense of humanism and character. Watch Farscape and I think you're basically looking at what Eric Saward was, fumbling and failing, trying to do with the show back in the 80s. (It's no coincidence that Sil and Sharaz Jek, the only two memorable villains from the Saward era, both look like the could be slotted into a Farscape episode with very little alteration.)

Plus: muppets! It's basically Pigs In Space, only played straight. You can't go wrong with that.

Taking nothing away from Claudia Black, who was clearly the breakout star here, I'd say that the entire core cast of Simcoe, Browder, Black and Tupu were just an amazing discovery. (Victoria Hey, perhaps a touch less so, but it's hard to cast aspersions when her costume was quite literally killing her-- I'd've phoned it in too.) Signing Browder & Black the moment they were available was the single smartest thing the Stargate franchise ever did.

I've never seen the show (though between the description and the sfx clip I'm strongly tempted to now) but I gather from the description that the writers have an obsession with eyeballs?

I always think of Farscape as Blake's 7 done right. With muppets. I suppose there's an affiliation with Saward's aesthetic, in that Saward would probably have preferred Blake's 7. But I can see Farscape doing Kinda and Enlightenment whereas Blake's 7 couldn't.
I don't know that Doctor Who is significantly less weird than Farscape. It's weird less often. But the series has handled daleks, yetis, axons, zygons, and Morbius without feeling that it's got a bit too weird for the premise. The two aesthetics could merge far more easily than many other series.

Being of a delicate disposition, the only annoyance I had about Farscape was that Crichtons transition from someone who didn't like to kill to someone who was pretty gun toting happened.. pretty abruptly (And yes, I know that the number of times Crichton gets mindfucked he probably is completely batshit insane). And the PK allies were definitely suffering from the Stormtrooper effect.
But at the same time.. Farscape is such a brilliant series, and so many times completely fearless in what it does. Cloning Crichton and keeping the clone, 'Revenging Angel', bloody well coming back to Earth and that too in a blaze of publicity, Harvey.. That was a production team that had balls of steel.
I enjoyed most of PKW but a resolution that involved both fleets except the flagships being destroyed seemed.. a bit much. Again, delicate constitution.
And where's the love for Bracca????

Not only does it manage to combine fist-pumping action with a grounded sense of humanism, it even manages to maintain the grounded sense of humanism while it's main human character is batshit insane: I love this clip of John and D'argo getting ready to make a big explosion while having a serious personal conversation, seen from John's perspective which is 50-50 reality and hallucination. Amusingly, the hallucination is quite mundane.

The Clone Arc perfectly sums up the brilliance of the writers and producers, IMO. I mean, we know what's supposed to happen when the main character gets cloned. There's some minor confusion as to who is real and who is a clone, and eventually the clone dies after either become evil or while proving his worth by heroically saving everyone. IOW, basically the plot of the Ganger 2-parter.

When Crichton gets cloned, OTOH, it is quickly established that because the process was instantaneous and the both have the same memories, it is absolutely impossible to tell which one is "real" and which one is "clone" and for all intents and purposes, they are both Crichton. Then, the episode ends without either of them dying. Instead, the entire cast is split with half forced to accompany one Crichton and the other half going with the other Crichton. Half the season thereafter alternates between two completely different storylines both of which feature "the real John Crichton" as the main character. One has Aeryn and deepens his relationship with her, while the other spirals into depression because "that other me" stole the woman he loved. Brilliant.

That's awesome. I hope you enjoy your journey.

Is anyone going to do an entry on Lexx?