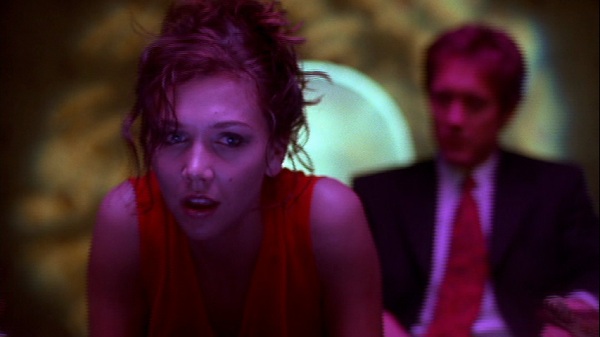 A couple months ago I was sitting at a bar waiting for my LDR-partner to get into town. We’ve been using the opportunity of long-distance relationshipping to explore the areas between us via AirBnBs. Waiting for their arrival I asked some friends what I should write about while I waited (without getting out my computer, like seriously I pen to paper writing, nothing looked up… and this is my memory we’re talking about).One of my friends said that I should tell all the vanilla folk the real deal with the movie Secretary. It was a challenge to the kink of the movie, less than purposeful challenge to my memory, and little could they have known the levels of emotional resonance this movie continues to have for me. I surprised myself in how I my thoughts presented themselves on the page.

I remember the first time I watched “Secretary,” I didn’t quite believe anything like it could exist in real life. To be fair, I still don’t and I’ll get into that more later but I immediately related to the protagonist. The young awkward girl stuck in a seemingly neverending “transition period,” the desire to let someone else take control, the deep unabated trust and belief in someone who promises to reward you when you’ve done well; it’s a kind of submissive’s fairytale. The D/s world was not one I had paid much attention to outside of visits to my local sex shops. Unlike most of my kinky friends, I waited to explore my options until I had someone to explore with. I have vivid memories of watching some behind-the-scenes featurette or DVD extra, in which the writer/director’s responses clearly marked this as a passion project. In the future, I hope that this will just be another version of a familiar love story. This may be a paraphrase but the soft pleading of it has stuck with me. Why isn’t Secretary a typical love story? The BDSM elements? Describing the rest of the story is low key conservative. It’s not a gritty villainized BDSM, the way we most typically look at this community in entertainment, it echoes the sentiment of most kinksters and fetishists I know: a power dynamic that reflects the relationship itself.

In fact, the BDSM practiced in the movie might be less realistic than the love and intimacy it portrays. That love is built on the foundation of shared understanding, conquering fears through support and having someone to conquer fears with. The ineffable qualities that make a relationship work are brought to life by the dramatic performances of Gylenhaal’s submissiveness and Spader’s dominance. The love story that captured my heart however is far more subtle and often overlooked. At its core, Secretary wrestles with shame and guilt in relationships. How these negative relationships influence behavior both positively and negatively; how shame and guilt, when learned through discipline, can translate into love and personal growth. It’s all about perspective, communication, trust, and respect.

I should start by saying that I’m 100% sure that not all BDSM, same as vanilla, relationships will see themselves reflected in my reading of this movie. I’m fairly certain that others have extremely different readings and experiences with it; we’re all different, have different needs and desires, and the movie acknowledges this so we should keep that part of the discussion. Having said that, the majority of those into kink or in kink relationships (in my experience) can recognize the relationship dynamics at play in their actions. It’s not that our heroine/ingenue/lead doesn’t like her boyfried (Davies). He’s just unfulfilling, expects more from her than she wants to give but would likely go along with it as long as she felt alone in the world.

In romantic comedies, even black comedies like this, “boring” is one of the worst sins a person can commit. We could criticize this as amatonormative (which it is) but more relevant to my discussion is the reinforcement of romantic gender roles. It lends itself to expectations of men to be more dominant and women to be more passive and submissive. It’s all part of a larger societal agreement in the ways we are comfortable understanding. In this way, the kink of Secretary feels safe at the relatively shallow end of the pool. It’s a mix of kinks that don’t necessarily “go together" but the kink isn’t the message. The message becomes what we understand about the relationship without fully understanding why the characters needed the kink to have that growth.

Secretary becomes a treatise on control. In a much quieter almost obfuscated narrative, we see Gyllenhaal’s character both giving and taking control, being more present in her day to day life. Including both in and out of intimate spaces, in work, at home, in nature. She begins the movie bound by her own desire for control of her emotional and mental life. Her most meaningful relationship is a tortured interdependence between mother and child. The predictability and complacency of suburb-culture becomes the meduium through which her mother controls her with shame. We see the mother struggle as she tries to infantilize her daughter to protect her from herself. Or rather her self-damaging process of control through self-harm in the form of cutting. In the story of Gyllenhaal’s character we can quickly see that the language of shame and complete control become avenues to communicate love and concern as well as impressing control onto or over someone. This dialectic allows the movie to weave love and shame and control into a relatively intersectional relationship braid. Neither do they exist on opposite ends nor too close together; instead, inderdependently.

So “boring,” becomes shorthand for unfulfilled whether intellectual, spiritual, or sexual. I’m sure this process of embracing a facet of selfhood and identity is familiar to anyone who has been in denial or closeted as they are going through the experiences of self-exploration and/or coming out. Maybe neurotypical people are the only ones for whom this process is both novel and/or peculiar. A kind of innate ambivalence that is created in reaction to the socially invented and enforced rules of interpersonal conduct. Already kowing other avenues of connection and communication, this melting pot instead creates fear of individuality instead of celebrating the tinsel-veined glitter factory that makes you *you* (that might just be me describing myself there).

We may never live in a globally accepting social network; there will most likely be someone who is always made uncomfortable by imagining myriad shades of great and so staunchly embraces the clear extremes of black and white. Of course, I’ve been referred to as the rainbow sheep of the family and just alluded that glitter is in my blood. For all of those investing in shades of grey maybe it would be better to try to collect color. A hue finder that can be truly personal to you. Whether they be in bruises and love marks or lipstick and clothing, or all of the above.