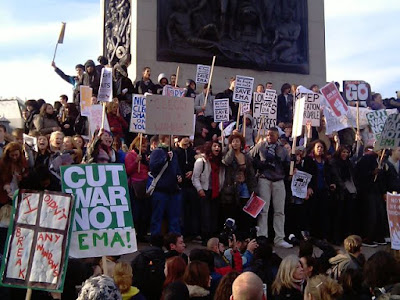 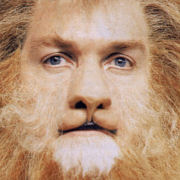 The Angel of History must look just so. His face is turned towards the past. Where we see the appearance of a chain of events, he sees one single catastrophe, which unceasingly piles rubble on top of rubble and hurls it before his feet. He would like to pause for a moment so fair, to awaken the dead and to piece together what has been smashed. But a storm is blowing from Paradise, it has caught itself up in his wings and is so strong that the Angel can no longer close them. The storm drives him irresistibly into the future, to which his back is turned, while the rubble-heap before him grows sky-high. That which we call progress, is this storm.

Benjamin's exegesis was inspired by a figure in a painting by Klee... but, sometimes, when I read that passage, I see Biroc.  To me, Biroc is the angel, haunted by the cruelties of the past and propelled forwards by the inexorable progress of brutality, yearning to pull the emergency cord and stop the train of history, to burst apart the continuum of repetitive exploitation. The media of his travel are the mirrors, the shimmering reproaches that reflect his and his people’s ruin back at him, and allow him through into the past where he can see – and even participate in - the horror of the lost empire that has doomed his people to their turn in servitude, the lions now kings no more, the king’s beasts in chains.

The Doctor walks into the cobwebby, ruined Tharil dining hall and sets right a goblet that was left on its side centuries ago. Later in the story he is taken back to the moment when the Tharils began to lose control of their empire, when they were attacked at the height of their power by the revolution they thought they could dodge forever. Disgusted by their treatment of their slaves, the Doctor pours wine into the very same goblet (but centuries before he first saw and righted it) until … well, until the Tharil’s cup runneth over… and then knocks it over in a gesture of splendid, ironic contempt for their decadence; decadence built on the suffering, servitude, abuse and unrequited labour of those the Tharils call “only people”.

The grand feudalism of the Tharils has crumbled, demolished by the revenge of history, by the revolt of the serfs and their faceless machines of violent liberation… and the industrious serfs have built their own civilisation, which has become mercantile and imperialistic, technological and temporal, perhaps with their time engines based on the looted skills of the time sensitives who used to loot their skills long ago. It’s never stated that Rorvik and his gang are the descendants of the slaves who built the Gundans… but even if they’re not, it hardly matters. They represent the high-technological interplanetary trading society that replaces the empires of castles and banqueting halls and leonine heraldry. In the history of our world, the international slave traders were essential to the rise of capitalism, helping to supersede the world of feudalism and aristocracy.

Biroc is the noble warrior who knows his world is gone - and that it deserves to be gone - forced to represent his people who are now the wracked and stacked and bought and sold merchandise of a philistine capitalist culture, a culture that gives opportunities to cretinous, narcissistic but enterprising bigots who can pay enough bonus-hunters to help them ship the slaves through the gateway, the eye of the needle.

(Rorvik, by the way, is every inch the swaggering Thatcherite of the early-80s... and of today.  He's self-righteous about his own supposed leadership qualities and initiative.  He's all hubristic bibble about "lily-livered deadweights".  He doesn't even understand the Doctor's reference to the Tharil slaves as "poor creatures", interpreting it as impugning their monetary value.  The sublime merely irritates him.  Everything that doesn't serve him, he tries to break.  "Everything breaks eventually" could be the motto of Tory socio-economic policy.)

But Biroc, with a little unnecessary help from the Doctor & Co… who don’t realise that all they have to do is sit back and watch the gears and cogs of history tick by as Biroc and his friends wind them… manages to blast open the trap. And Romana goes with him because she doesn’t want to go back to a static and petty and reactionary world that would never understand a temporal, striving, regretful, angry thing like Biroc in a million years. The words the Doctor uses to say goodbye to her are a cheeky appropriation of Shakespeare, from a story about men who tried to swim against the ruthless tide of history.

The weak enslave themselves. The slaves who do not revolt consent to their condition. The imperialists, lords and slavers all create the conditions for their own dethronement and indenture… in fact, just being a slaver is a kind of indenture, an enslavement to boredom and decadence and banality and routine cruelty. But, if you are sensitive to time, if you understand history, if you can see the pattern of the whole in the behaviour of the tiny random chances, then you can visualise a different possible future and jump for it… and break out of the loop even as it shrinks around you. In other words: if you are sincere, blood vanishes and fear gives way.

Go, protestors!  You'll be superb.  You're the Tharils now.  Rise like lions. 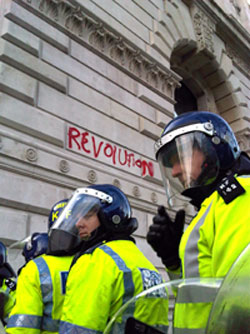 That was... actually inspiring.

Why the hell aren't you writing for a newspaper?

The Represent the excessive-technological interplanetary buying and selling society that replaces the empires of castles and banqueting halls and leonine heraldry. inside the history of our global, the international slave buyers were important to the upward thrust of capitalism, assisting to supersede the world of feudalism and aristocracy. Tharil eating corridor and sets right a goblet that was left on its side centuries ago. Later inside the story he's taken again to the moment whilst the Tharils began to lose manipulate of their empire, once they had been attacked at the peak in their electricity by means of the revolution they thought they may ward off for all time.