Hey all. Some quick orders of business, and then on to our somewhat unusual show for the day.

First off, I'm pleased to announce that the print edition of the Hartnell essays now exists. You can buy it here. It is, sadly, only available from amazon.com, and international readers will have to pay for international shipping. It is, however, quite lovely, and the perfect gift for the overeducated and underemployed Doctor Who fan in your life this holiday season. It's $16, which is the price at which I get the same royalty I do selling the Kindle edition for $5. Speaking of the Kindle edition, it remains available on Amazon.com, .co.uk, .de, and .fr. Buy it with Euros while you still can.
Finally, an announcement about an odd week of posts. This week TARDIS Eruditorum will post on Tuesday, Thursday, and Friday. On Monday and Wednesday I'll be running sample chapters of the next project I'm trying to get off the ground, a book I'm calling Paradise Dungeons. Basically, it's a psychochronography of Wonder Woman, focusing on the way in which a piece of feminist bondage utopian propaganda unexpectedly became a popular culture phenomenon, and what that means throughout the 70 year history of the character.
Instead of doing this one as a blog, I'm doing this one straight-up as a book, and attempting to pre-finance it via Kickstarter. So if you like the sample chapter below, please swing by the project's Kickstarter page and kick in a few bucks. For a $10 contribution you get the book when it's written, and beyond that there are various other shiny toys available. And, of course, please spread the word. I'm really excited about this project. (And promise it will not interfere with your God-given right to three horrifically wordy posts about Doctor Who a week.)
And we'll be posting again tomorrow with The Horror of Fang Rock, of which Steven Moffat notes that "There's the obligatory THE and OF - and all the other words rock. One of them actually." 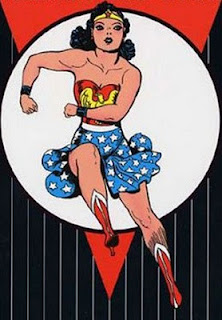 "Hercules specifically tricks Hippolyte out of a magical undergarment"

In the context of Hippolyta's story, "girdle" has its original meaning of a belt, not an undergarment. (Admittedly, readers of the original comic might have taken it as a reference to the like-named undergarment.)

"It is not an inauspicious beginning"

One negation too many.

One thing I think about superheroines that I was kicking around in relation to Power Girl awhile back is how they represent a weird hybrid version of the Leading Man: The Lead tends to be an inherently masculine figure and, as we talked about in relation to Jon Pertwee, the most disposable and consumable role in the narrative thanks to their charisma. So in many ways female action heroes tend to be Female Leading Men instead of Feminist Leads and, as a result, still have the logic of consumption as intrinsic to who they are, but even more so as they're women and are still subject to the Male Gaze and generations of anti-feminine discrimination.

Long story short I think Power Girl eventually came to subvert this problem, just as she got wiped from continuity. I'm not sure if this is the direction you were thinking of going with Wondy or if you think that's a part of who she is even at this early stage of her life, but I just thought it'd be interesting to toss out especially as you spent so much time talking about similar lines of thought over the summer. I'm positive I'm not the first person to make this connection, but I couldn't give you references off the top of my head. You're probably in a better position than I at the moment.

When the original (1939) Sandman character first appeared, he was given a female partner, Dian Belmont, who was (mostly) his equal rather than a mere rescue object. But then a couple of years later, coiciding with Sandman's switch to a more typically superhero-type costume, Dian was dropped (killed off, in fact) in favour of a Robin/Bucky-style boy sidekick. (Simon & Kirby sometimes get the blame/credit for these retoolings, but in fact they inherited them.)

Alarmingly few of your regular commenters seem to be making the most salient point here:

Personally, I love Wonder Woman, and always have since I was a little boy. But as I grew to be a critical adult, found the nature of her as a "masculinsed woman" and not a powerful woman to be a bit of a problem for my fannish like.

BUT - along comes you, and with your tendency to re-interpret and re-imagine the best picture of a piece through Anarcho-Marxist-Alchemy, and suddenly there is hope in my heart that perhaps I wasn't just ogling Diana all this time.

I can't wait to read your book!

BerserkRL:
"When the original (1939) Sandman character first appeared, he was given a female partner, Dian Belmont, who was (mostly) his equal rather than a mere rescue object. But then a couple of years later, coiciding with Sandman's switch to a more typically superhero-type costume, Dian was dropped (killed off, in fact) in favour of a Robin/Bucky-style boy sidekick. (Simon & Kirby sometimes get the blame/credit for these retoolings, but in fact they inherited them.)"

I haven't been able to read most of the originals yet, however... I believe Dian simply disappeared between episodes. Roy Thomas, eternal Golden Age Fanboy, wrote a story in SECRET ORIGINS in the late 80's in which Dian was killed. And then, some years later, another story was written elsewhere which totally invalidated it. Because Dian lived to a ripe old age.

SANDMAN MYSTERY THEATRE, a series in the 90's, told stories that, presumably, all took place before the original comics. For the longest time, it was uncertain whether it was supposed to be the "same" character who later joined the JSA, or not. Later, after the book ended, we found out-- he WAS. But the writers who worked on SMT may not have intended this, or else, were simply having "fun" at readers' expense. (Similarly, Frank Miller's BATMAN: YEAR ONE had Jim Gordon with a son, not a daughter, and Selina Kyle as a hooker. Both of which have been "explained" away in later stories by other writers. (One can almost imagine what went on behind the scenes... "HE's not like that-- he's like THIS!" "Oh yeah? Well I'll show YOU...!" All the while readers get only more confused.)