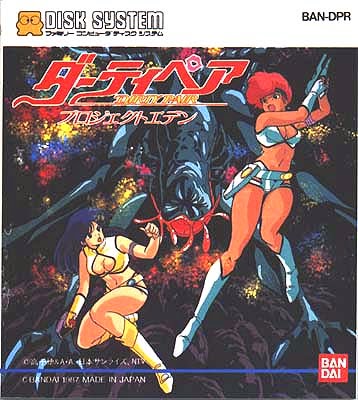 Back when I started planning these video game posts it never would have crossed my mind that it would take until 1987 to properly get this phase of the project underway and that the first actual video game we'd be looking at wouldn't even be a Star Trek one. And yet, Kei and Yuri must be heard.

There were a handful of Star Trek titles released for early PCs and home consoles like the Apple II, TRS-80, VIC-20, Commodore 64, Atari 2600 and Vectrex in the early 1980s, but they were all on platforms I either didn't have at a formative age or are so arcane they're difficult to get ahold of these days. Considering the way the pagination for Volume 2 is turning out, I may try to take a look at a few of them to flesh that book out, but we're skipping them for the time being. The Star Trek video games I'm most familiar with date to the late-1980s and early 1990s and we'll talk about those when the time comes, but, as it turns out, Dirty Pair: Project E.D ...