Afraid and a Long Way From Home (The Daleks) 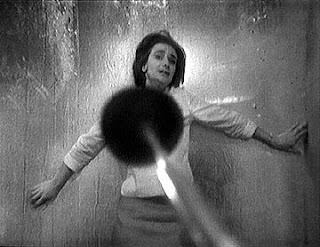 Doctor Who continues apace with another claustrophobic episode featuring the four main characters and nothing else. The show is still feeling its way around, uncertain of what it is. But as with the first episode, it is already clear that it is something. Most notably with Ian's line describing the Doctor as having "a knack for getting himself in trouble," a character trait that will sustain 48 years and counting of stories.

But in other ways, the show seems lost, following the trends of futuristic design laid out by classic movies like Forbidden Planet instead of breaking new ground. The dead world of Skaro is a monument to retro-futurism. The TARDIS is not yet a magical box, with excessive effort being made to actually explain how the thing works. The fact that the change of the Doctor and Susan to aliens instead of futuristic humans was a last-second production decision is still clear, with both acting as though the TARDIS is just future technology that any species would acquire given time.

I sometimes wonder why I like the people of this miserable planet so much: 100,000 BC

It is 100,000 BC. There is no number one single. There is no music industry. Indeed, there is no industry period. There's not even really a humanity, period, with the great leap forward of behavioral modernity still lurking 50,000 years in the future. The peak of the ice age currently being enjoyed is about 80,000 years in the future. On a hillside, a blue box appears with a strange wheezing, groaning sound.

More usefully, it is the 30th of November, 1963. The Beatles recapture #1 with "She Loves You," the biggest selling single of the 1960s, which is charting for the second time. It will hold that chart position for two weeks, before giving way in the final weeks of the year to "I Want to Hold Your Hand." The Kennedy assassination has long since turned to farce with Lee Harvey Oswald himself being murdered two days later. Now the world waits uncomfortably, aware that the progress of history has been diverted, but not knowing where, or towards what.

In later episodes, the disparity between the internal and external sizes of the TARDIS will be explained in terms of the interior being a different dimension. But ...

I Was a Dad Once: An Unearthly Child

It is 5:16 PM, November the 23rd, 1963. Gerry and the Pacemakers' "You'll Never Walk Alone" is the number one single. It will go on to become the anthem of Liverpool FC, at the time of writing still narrowly the most successful English football club of all time. Since 6:30 PM the previous day, the BBC has been running news coverage of the assassination of US President John F. Kennedy.

At twenty seconds past the minute, eighty seconds off its scheduled airtime, normal programming resumes with the first episode of a new children's science fiction serial, Doctor Who. The opening credits are a futuristic psychedelic blur that seems oddly quaint as the symbol of youthful revolution has just been gunned down in Texas. The theme music, ostensibly written by Ron Grainer was, for all practical purposes, realized by Delia Derbyshire, who arranged Grainer's score by splicing tape together and speeding/slowing a sample of a single note being plucked on a string, white noise, and some testing oscillators. Derbyshire would, in her later life, be recognized as an unsung hero - a pioneer of electronic music - but received no on-screen credit because the BBC's policy ...

Gallibase has relaunched 'Timelash' as a story-per-day affair. Along with others, I've managed a review (ranging from a terse comment to a bloated essay) for every story. It goes without saying, I don't have a girlfriend.

Anyway. Today, we got to 'The Tenth Planet' and so I thought I might post my comments here - or the more interesting ones anyway (everything being relative) - and make it a regular thing every time we finish with a Doctor. Basically, I'm very bored.

As you will see, my view of the Hartnell era is much influenced by the work of V. Gordon Childe, Walter Benjamin, historical materialism in general, the wobbly 'permanent arms economy' theory, William Morris, Shakespeare, Marlowe, Edward Said and lots of thinly veiled class hatred. There's also some stuff in here that might remind you of the About Time books... but, with all due respect to Miles and Wood, I'd already thought of it all before I read them. When I mention something that I got from them, I acknowledge it.

It's been said before but its true: the first episode is amazing, the other three are disappointing... but only by ...