The Pertwee era, and I can vouch for this having written for it, presents a major challenge in providing a history of Doctor Who, simply because it doesn't fit with any of it. For 60% of it, the premise of the series is out of place. The Doctor is portrayed, inevitably, as a reaction against the previous Doctor, but the previous Doctor is the template for every single Doctor after Pertwee. It's got an awful lot of military action-hero stuff that's kind of weird for the program. It's an odd experiment that has really survived as a sort of limit case for what Doctor Who can be.

This is, ultimately, what The Doctors Revisited does. Pertwee is admitted up front as an oddity, and then studied and explained in half an hour. Moffat is on hand to explain why Jo Grant, Liz Shaw, the Brigadier, and the Master worked, and in three out of four cases it's "the actor playing the part." And an expanded field of celebrity guests are on hand to talk about the impact of it, reaffirming that this wasn't just an odd era of Doctor Who, it was a major ...

Be Childish Sometimes (Planet of the Spiders)

It's mid-September, 1992. The Shamen are at number one with "Ebeneezer Goode." At least, in the UK. In the US, somewhat less fortunately, "End of the Road" by Boyz II Men is at number one. As it was for three months that year. Perhaps more importantly, at least for our purposes, in a small town in Western Connecticut, a newly minted ten year old flips through a book he just got from a family friend a week or so after his birthday. By a man he's never heard of called John Nathan-Turner, about a television show he's vaguely heard of called Doctor Who, the book is called The Companions. After the friend leaves, and it is no longer rude to do so, he asks his mother what this Doctor Who thing is. She looks around in a drawer, and hands him a VHS tape, which he goes to the basement to watch. The Delia Derbyshire theme, familiar to so many people, plays, and something called Planet of Spiders comes on. And so, in the ...

It's August, 1999. Doctor Who is as dead as dead can be. These are the heady early days of New Labor, two years after Tony Blair managed to end an 18-year stretch of Conservative rule. In the main stretch of the blog, we are a few years from the dawn of the Long 1980s. Here we are a few years past that, in a murky transition into an era that it's not quite clear we've seen the end of yet - something alarmingly resembling the present. The clock ticks closer towards a millennial change stained deep with eschatology. Musically we are in a wasteland of Ricky Martin, Westlife, and Geri Halliwell doing Latin-inspired numbers. These are not days that anyone claims as the glory days of anything, least of all Doctor Who, which is off the air and seemingly never coming back.
In these transitional moments it is sometimes helpful to mine the past for ideas and directions. The shift between historical eras is a vague phenomenon existing more in the realm of ideas than in the realm of material objects after all - one reason that it is easier to track through psychochronography, which allows us the ability ...

Too Narrow, Too Crippled (The Monster of Peladon)

It's March 23, 1974. Paper Lace continue to hold the number one spot with the legendarily execrable "Billy Don't Be a Hero," a song imploring a lover going off to war to "not be a hero" and, in particular, to "keep your pretty head low." It is basically one of the worst things ever. After two weeks it finally goes away to be replaced with "Seasons in the Sun," one of the most upbeat and cheery songs about dying ever recorded, and at only 3:24, not so long that the listener actually wants to. Also in the charts are Paul McCartney and Wings, Ringo Starr, Gary Glitter, The Hollies, and Queen.

In real news, the OPEC oil embargo largely ends, bringing some stability to markets that had been lacking during the energy crisis. A major Palestinian terrorist attack in Israel - the Kiryat Shmona massacre - kills 18. And the Carnation Revolution takes place in Portugal ...

You Were Expecting Someone Else 5 (Countdown/TV Action) 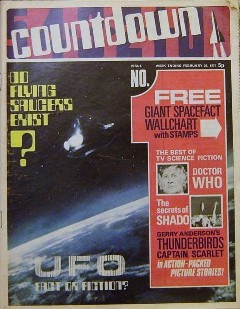 And once again, it's time for the Doctorly engagement with the wide world of ancillary merchandising. When last we left this story, back in June, we were noting that the late 60s comics fit firmly in a specific tradition of British comics, and were as accurate a translation of Doctor Who to that medium as was meaningfully possible.

For both the beginning and end of the Pertwee years, the existing Doctor Who comic strip appeared in the same magazine it did in the Troughton years - TV Comic. At the onset, the comics were very much in the same mould as the late Troughton strips only with a grotesque representation of Jon Pertwee instead of one of Patrick Troughton. They shared the same mind-wrenchingly odd sense of plotting, and the same belonging to a different tradition. At the close they were something different. The manic energy of the Troughton years had faded, but it was replaced with a much more taut sense of how to handle action and suspense.

But the real difference can be spotted just by looking. Here - I've taken a page from both the early and late TV Comic Pertwee strips and put them below. Have ...

It's February 23, 1974. Suzi Quatro is at number one with "Devil Gate Drive." A sort of post-glam piece of bubblegum, it holds the spot for two weeks before giving way to Alvin Stardust, another sort of sanitized glam cash-in. It lasts for one week before yielding the top spot to Paper Lace's "Billy, Don't Be a Hero," widely recognized as one of the worst songs ever recorded. David Bowie, Ringo Starr, The Hollies, Paul McCartney and Wings, and the Bay City Rollers all also chart.

The most obvious piece of news to cite here is the fact that the election that returns Harold Wilson as Prime Minister takes place. Charles de Gaulle Airport opens in Paris. And seven major Nixon aides are indicted in the Watergate break-in and cover-up.

Pop Between Realities, Home in Time For Tea 15 (Moonbase 3) 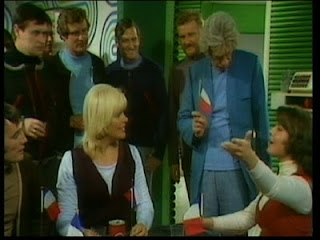 Sometimes the most valuable thing one can do to understand something is to take a step back from it. It should be no secret to anyone reading the blog that I am less fond of the Pertwee era than I am of many of the other eras of Doctor Who. (And it is firmly "less fond," as opposed to "not fond") I've expressed at least part of that frustration, but honestly, it wasn't until I tried watching Moonbase 3 that I realized exactly what it is that seems to me so fundamentally flawed about much of the Pertwee era.
Moonbase 3 is interesting. It's not the first time Doctor Who people went on to try something else - that's basically Adam Adamant Lives! - nor is it the first spinoff of Doctor Who - that's K-9 and Company. But it is the first time major production staff of Doctor Who used Doctor Who as a springboard for a new show. Basically, Moonbase 3 is six episodes of Barry Letts and Terrance Dicks trying desperately to quit Doctor Who for something else.
In practical terms, it was a failure - low rated, and with a mixed critical consensus. Accounting ...

Books! The Best Weapons in the World! (Invasion of the Dinosaurs)

It's January 12, 1974. Improbably, despite the fact that it has been two weeks since Christmas, Slade continues to hold the number one single, though after only one more week of this they give way to The New Seekers' "You Won't Find Another Fool Like Me," which in turn gives way to Mud's "Tiger Feet," which has a four week run and is the number one single of the year. Andy Williams, The Sweet, Lulu, Diana Ross, David Bowie, and The Wombles all also chart.

While in real news, Patty Hearst is kidnapped by the Symbionese Liberation Army, and Alexander Solzhenitsyn is exiled from the USSR. Really, that's about what I can scrape together here. Oh. On US television, both The Six Million Dollar Man and Happy Days debut. There. That's truly major world events there.

While on good television... oh, wait, never mind, it's Invasion of the Dinosaurs. A story that is not so much in the territory of "good" as it is "infamous," with (likely spurious) rumors even existing that Barry Letts requested its destruction because he was embarrassed by ...