Why Not Make Some Coffee (The Time Warrior)

It's December 15, 1973. Slade is at number one with "Merry Xmas Everybody," with Gary Glitter, Roxy Music, Wizzard and Mott the Hoople also lurking in the charts. Slade holds #1 through Christmas, and into the new year, in the last real flourishing of glam.

I'd do the usual new season politics roundup, but I feel like the last entry did most of it. You've got the Yom Kippur War, tons more bad stuff in Northern Ireland, Pinochet's coup d'etat in Chile, Spiro Agnew's resignation, and the mounting hilarity of Watergate. While during this story, OPEC doubles the price of oil, and the Three-Day Week itself comes into force.

So let's get down to watching Doctor Who, since the nature of the blog as it gets to the end of an era is that I end up packing it with entries about things other than TV episodes. (There are, after this, four more Pertwee stories, but Robot is eight entries away.) And The Time Warrior, made at the end of the Season Ten block (i.e. a block where the show was, as I've said, on fire creatively), is ... 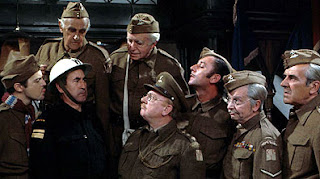 The stereotype, of course, is "stiff upper lip." Or as I put it last Christmas when my sister was stranded until December 23rd in Heathrow and she was baffled how a couple of inches of snow were something that took four days to clear, "why would the British fix something that they could just stoically endure?" It's one of the classic national myths of self-identity in the world. Every nation has them. The US are ambitious cowboys, the French have better taste than everyone else, and the British have the ability to keep a level head through anything. "Keep Calm and Carry On," as the idiom goes these days.
The origin of that idiom, of course, is World War II. The famous image was an unused propaganda poster in case of a German invasion of Britain, putting it squarely in the Battle of Britain mythology. And I should note, I use myth here not to suggest that the claims are untrue, but rather to suggest that they have an almost religious character to them. They're important not because they are true - i.e. because you can make useful decisions based on them - but because they are so widely ...

Tamper With The Forces of Creation (The Green Death)

It’s May 19, 1973. Wizzard is at number one with “See My Baby Jive,” which stays at number one for four weeks until Suzi Quatro’s “Can The Can” unseats it for a week, followed by 10cc’s “Rubber Bullets.” Also in the charts are The Sweet, Gary Glitter, David Bowie, T. Rex, Lou Reed, Alice Cooper, and, um... Perry Como. I’m exaggerating a little bit, as Stevie Wonder and Fleetwood Mac also chart. Since we haven’t talked about them in a while and it’s worth checking in occasionally, David Bowie’s Aladdin Sane is at the top, with Alice Cooper’s Billion Dollar Babies and Pink Floyd’s The Dark Side of the Moon all charting. Along with two Beatles compilations and 40 Fantastic Hits From The 50’s And 60’s. So a bit of a nostalgia trip creeping in there.

In real news, Skylab launches, followed immediately by Skylab 2, which whizzes off to the stars to fix the first one. Lord Lambton resigns from Parliament after The News of the World busts him on his fondness for prostitutes. The Greek military junta ...

A Thousand Years From A Disintegrated Home (Planet of the Daleks)

It's April 7, 1973. Gilbert O'Sullivan is at number one with "Get Down," with David Cassidy, Donny Osmond, and Little Jimmy Osmond all also in the top ten. A situation along these lines persists for three weeks before Dawn reach number one with "Tie a Yellow Ribbon Round the Old Oak Tree," which ends up being the number one song for the year. David Bowie, Sweet, and Gary Glitter also chart in other three weeks of this story.

In real news, the Labour Party takes over the Greater London Council, prefiguring their general election win ten months later. Also, the House of Commons declines to reinstitute the death penalty, and a one day strike in opposition to government policy on inflation takes place amount 1,600,000 workers. Elsewhere in Europe, the GSG 9, Germany's counter-terrorism force, is formed in response to the Munich killings. In the US, a large swath of Nixon aides resign in an attempt to draw a line under the Watergate scandal, which I'm sure is going to work. A 71-day standoff with the American Indian Movement at Wounded Knee ends with the surrender of the Native Americans ...

The Sound of Empires Toppling (Frontier in Space)

The day before Pink Floyd's release, on the other hand, came Thomas Pynchon's release of Gravity's Rainbow. Other non-musical events of the six weeks included voters in Northern Ireland voting to remain part of the UK (Irish nationalists supported a boycott of the referendum), while IRA bombs go off in London. The Governor of Bermuda is assassinated by a small Bermudan black nationalist ...

The Outside Universe is Breaking Through (Carnival of Monsters)

It's January 27th, 1973. The Sweet's "Blockbuster" has mercifully brought an end to this unfortunate Jimmy Osmond business, and hold number one for four weeks, marking a pleasant restoration of glam rock order. Gary Glitter, Elton John, David Bowie, and ELO all also chart. In non-musical news, Roe v. Wade is decided in the US, the US ends its involvement in Vietnam by signing the Paris Peace Accords, while in the UK the Sunday Times wins a court case allowing it to publish articles on thalidomide, as it was increasingly turning out that people should probably have figured out that in addition to reducing nausea in pregnant women it also caused them to give birth to deformed flipper babies. Oops.

This Point of Singularity (The Three Doctors)

It's 1807. Major hit songs of the year include Ludwig van Beethoven's Mass in C, the ballet Hélène and Paris, the operas Joseph and La Vestale, and Thomas Moore's publication of Irish Melodies. While in non-musical news, Napoleon makes an attack on Russia, Aaron Burr is acquitted of conspiracy, the England/Argentina soccer rivalry has pre-season friendly as Britain mounts a disastrous attack on Buenos Aires, and Robert Fulton launches his first American steamboat.

While in London, William Blake abandons his masterpiece, The Four Zoas. Intended as the culmination to a lengthy series of what are now described as his "mythological works," the piece was never finished to Blake's satisfaction, although parts of it were recycled into Jerusalem, one of his two last great mythological pieces (the other being Milton, A Poem, whose introduction gave the words to "And did those feet in ancient times, arguably now England's most popular hymn and unofficial national anthem).

Fingers stained with ink and the caustic acids of his relief etchings, Blake stares with an unfathomable eye at angels, gods, and demons. A visionary in every sense of the word, he sees within the festering wounds of industry the ... 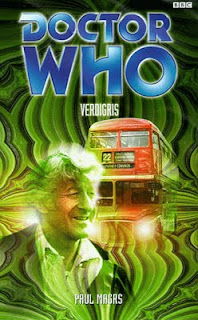 The year 2000, for a generation of Britain, marked the end of the future. A fluke of naming committed in 1977 inadvertently left the most important comics magazine in the UK with a name demarcating a clear and unavoidable sell-by date. It's tough to blame anyone - nobody starting a grubby comics rag ostensibly edited by a fictional galactic conquerer and featuring a barely coherent revamp of 50s icon Dan Dare would have taken seriously the question "but what are we going to do in 23 years." The answer was clear - be working on something else, this magazine having gone under 20 years earlier. But come 2000, there we were, staring awkwardly at one of the most iconic mastheads in science fiction and going "well, that's underwhelming, isn't it?"

2000, then, is the perfect date to revisit early 70s science fiction. In 1972, nobody believed there would be a year 2000. And come the year 2000, it turned out they'd been right all along. There really was no future. Enter Verdigris and Paul Magrs. I've already, in previous posts, hinted that the rise of the BBC Books line to replace the Virgin books line in Doctor ...