Here's an emergency psuedo-Pex Lives podcast, organised at short notice by James Murphy, and featuring James himself, Holly Boson, and me, chatting about the passing of the legendary Christopher Lee. 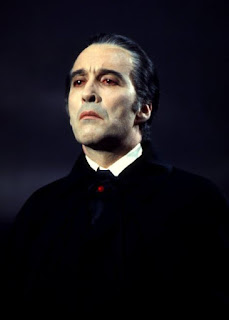 May is Macra Madness Month (Shabcast 5)

Fraternal May Day greetings to all workers by hand or by brain, all socialists, and all anarchists.  Have a good one, comrades.  And implacable hatred, opposition and ill-will to all capitalists and their class allies.  Boo, hiss, etc.

This month, both the Pex Lives Podcast and the Shabogan Graffiti Podcast are covering the classic 60s Doctor Who adventure 'The Macra Terror' by Ian Stuart Black, sadly junked long ago, and represented nowadays only by a soundtrack and a reconstruction.

Shabcast 5 (download or listen here) sees me joined by my longstanding online buddy, actor Elliot Chapman, who also happens to have recently been cast as the new Ben Jackson by Big Finish.  The Early Adventures will be available soon, and will feature Elliot alongside Anneke Wills and Frazer Hines.

Elliot is so smart and erudite that he seems to be on some kind of mission to singlehandedly disprove the old stereotype about actors being thick.  And he likes my blog, which proves he's clever.  Our chat was fantastic fun, and I've had to edit it down savagely to make the episode anything approaching a reasonable length... but this means I ...

Normal shabcast service has been resumed after the unplanned emergency anti-fascist edition from earlier this month (though you may be hearing more from Phil and myself on the issue of the Hugos and the nazis).

This episode of the Shabogan Graffiti podcast is the long-awaited continuation of my mammoth chat with the lovely Josh Marsfelder, writer of the ridiculously good Vaka Rangi blog.  A slightly disjointed episode this one, but you're getting all the good bits.  The bits I chopped out are mostly me being inconsequential.  What's left is mostly Josh being eloquent and passionate about TNG, Trek generally, Dirty Pair, aesthetics, fan fiction, slash, Mary Sues, singularity archetypes, and all sorts and manners and conditions of interesting stuff.  We also do a bit of violently malevolent hating on Wesley Crusher... which should be entirely acceptable to all right-thinking people.

You'll love it, trust me.  Hardcore nattering, with no fascism to ruin everything.  Paint a bulls-eye on your heart right now.

Also, here are links to all my previous audio stuff: