Pop Between Realities, Home in Time for Tea 72 (Being Human) 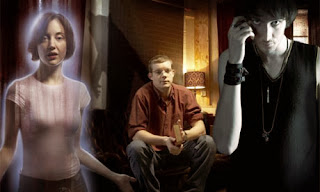 Well, look, the pilot was in 2008. So we’re only a little ahead of ourselves. And it’s worth exploring now simply because Being Human is a show that reveals a lot about what television became in the wake of Doctor Who. Because in many ways Being Human is the first significant post-Doctor Who show. It’s had its imitators, as we saw back when we looked at Primeval and Robin Hood, but those were just that: attempts to discern the underlying formula of Doctor Who and replicate it. With Being Human we have something else - a show that on the one hand clearly exists only because of Doctor Who and on the other is clearly not a Doctor Who clone by any measure.

The premise of the show is simple and cheeky: a vampire (Mitchell), a werewolf (George), and a ghost (Annie) attempt to live together and maintain a semblance of a normal life. They routinely fail spectacularly, getting embroiled in supernatural goings-on - vampires trying to take over the world in the first and third seasons, and human supernatural hunters in the second. It’s good - it started, as mentioned, with a 2008 pilot, and then kicked off ...

Pop Between Realities, Home in Time for Tea 71 (Skins) 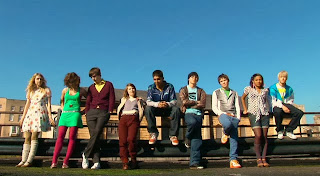 It’s also telling, because other than its manifest lack of aliens, Skins is striving for the same general cultural space as Torchwood. Which is already a bit of an odd observation, in that it puts Torchwood in the same general space a straightforward inspiration for Skins, Queer as Folk. But let’s put that outside of the equation for a moment, at least, and look at the similarities between Skins and Torchwood, as they’re non-obvious.

Skins, after all, is a teen drama, although not a straightforward one, in that it brazenly contains loads of adult content. Sex, nudity, and drugs abound in Skins; indeed, if you were to try to come up with a television show to piss off Mary Whitehouse, the only thing you’d want to do differently is to make it before she died. And yet its concerns are so visibly adolescent. This is a ... 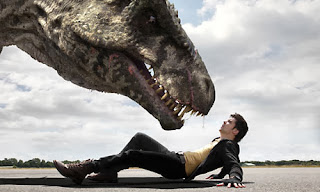 An era of Doctor Who in which nobody is making desperate attempts to copy and compete with it is one to view with suspicion. The logic here is simple: when Doctor Who is hot, there are going to be efforts to do similar things. When it’s not… well, it wasn’t just Doctor Who that was withering in the mid-80s; the entire children-friendly sci-fi/fantasy/horror television market was dead, and adult sci-fi wasn’t doing much better, with Doctor Who being more or less the lone survivor in either category. Whereas in 1976, with the Hinchcliffe era at its imperious best, you had The Tomorrow People, Shadows, Survivors, Space: 1999, Rentaghost, and Children of the Stones all existing in the same general cultural space as Doctor Who. Notably, not all of these were competitors as such. Some were BBC productions that zeroed in on specific audiences, others were ITV “Doctor Who killers,” et cetera. The point is simply that Doctor Who, when it’s at its cultural peaks, is something that exists in a larger context of shows.
So following Doctor Who’s titanically successful launch in 2005, it was basically inevitable that there were going to be ...

Pop Between Realities, Home in Time for Tea 69 (Jekyll) 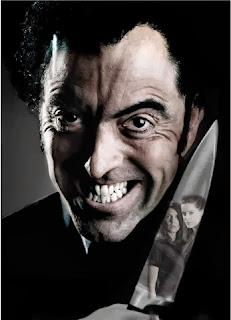 Over the course of 2007, the future of Doctor Who became clear. It was to nobody’s particular surprise that Tennant and Davies walked away from the program they did; it was about the length of time people spend in jobs like that. But what was going to happen to Doctor Who after Davies left was always a question mark, and cancellation was always a viable answer. Until 2007, at which point everybody on the planet knew what was going to happen. The next showrunner became self-evident. Of course it was going to be Steven Moffat. There was no real decision making process. It’s just that everybody realized the same obvious fact around the same time. There were two basic causes for this. The first, of course, is Blink, which we’ll deal with on Monday. But Blink merely demonstrated what we already knew: that Moffat could write really good Doctor Who scripts. Sure, it demonstrated it more emphatically than it had ever been demonstrated before, but it was nothing new. No, the real game changer was Jekyll.

In many ways what is most striking about Jekyll is what it isn’t. If it were made today, it would ...

Pop Between Realities, Home in Time for Tea 68 (The Catherine Tate Show) 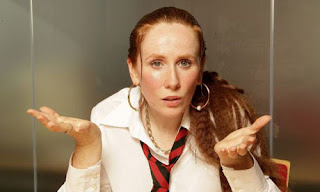 There’s a decision we have to make going into The Runaway Bride, which is, in effect, the same decision we make about The Web of Fear - namely whether or not we’re going to treat the episode as extra important because it includes a character who was brought back later in a retooled and far more popular form. Grudgingly following the precedent of The Web of Fear, we should at least acknowledge it, while simultaneously explaining why this is transparently not the way the episode was read in 2006. Still, there’s a question worth squaring away up front: why is it that a comedian known for playing a variety of grotesques came to be what is, by a significant chunk of audience, the greatest companion of the new series?

First we should understand Catherine Tate herself. Or perhaps more accurately, we should understand David Tennant, as it is very specifically his Doctor that Donna ends up being a spectacularly good companion for. It is difficult, if not impossible to imagine Donna pairing well with Matt Smith’s kinetic and physical performance, nor with Eccleston’s often brooding portrayal. (Although arguably she’s exactly what Paul McGann always needed ...

Pop Between Realities, Home in Time for Tea 67 (About Time) 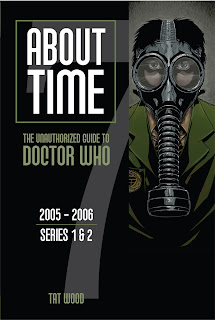 I went back and forth over whether to run this as an Eruditorum post or as a side post. Ultimately, I wanted to put it in before we started talking about The Runaway Bride, so it got an Eruditorum slot. Nevertheless, this is a book review of About Time Volume Seven, out on September 10th from Mad Norwegian Press, who were kind enough to give me a preview copy, which I spent two days doing nothing but reading. The short form is that it’s brilliant and you should buy it. The long form actually makes sense to describe in context of the series’ history, because About Time occupies a particular and important place in that history.

About Time is a fascinating example of a book series swallowed by history. It started and premiered before the announcement of the new series, and continued over the course of the series’ development. You can watch, reading it, as the new series exerts its gravity and changes the project out from under Miles and Wood, so that what the books are changes over the course of the series. Given that the series was released out of order, starting with Volumes Three through Five ...

Pop Between Realities, Home in Time for Tea 66 (Heroes)

At the other end of Series Two we discussed The Sci-Fi Channel’s Battlestar Galactica, Doctor Who’s initial stablemate in US television. Then we discussed the way in which the cult model of television that dominated science fiction television throughout the wilderness years was in full retreat. From the perspective of this blog, of course, this is obvious - we’ve been tracking the inadequacies of cult television since cult television was invented, and have explicitly positioned Doctor Who as a show that moves beyond the limited scope of the cult ghetto. But it would be a mistake to suggest that the transformation of genre television was exclusively a UK phenomenon.

This is also, I suppose, obvious - after all, ground zero for the new genre television was Buffy the Vampire Slayer in 1997 - an American show. Doctor Who follows in its footsteps and dutifully paid its debts to Buffy in School Reunion, and the influence will continue in Torchwood, particularly in its second season, which opens with the most mind-wrenching piece of fanservice ever filmed. But that describes only a particular type of genre television - generally fantasy/horror based, often with younger ...

Pop Between Realities, Home in Time for Tea 65 (Fandom Redux) 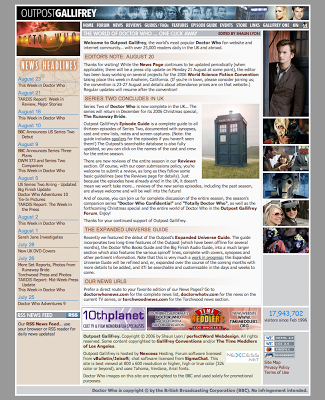 This will be review for some people, but the blog’s picked up a fair number of new readers since hitting the new series, and some recap is thus in order. But let’s talk about orthodox Doctor Who fandom, shall we?

T-Zero in Doctor Who fandom is May of 1976, which is when the BBC officially recognized the Doctor Who Appreciation Society (DWAS) as the official fan group, succeeding the Doctor Who Fan Club, which had been around since the 1960s. From DWAS came the first wave of pro-fans: David J. Howe, Jeremy Bentham, and John Peel are the most recognizable names. And many of them became instrumental in the meticulous documentation of Doctor Who. Terrance Dicks and Malcolm Hulke turned to them for The Making of Doctor Who, and most of the early reference books to the series came out of their work.

The thing is, their tastes in Doctor Who were… idiosyncratic. DWAS president Jan Vincent-Rudzki wrote one of the most legendary reviews of a Doctor Who story ever as he tore into The Deadly Assassin for its numerous supposed violations of past continuity. The irony, in hindsight, being that The Deadly Assassin was sufficiently good that ...