Skulltopus 12: Come Out onto the Balcony and Wave a Tentacle

Okay, first a quick (well... relatively quick) recap and a few clarifications... because we've come a long way. And then onto some hot Zygon action.

According to China Miéville, the tentacular monster was introduced to Western SF/Horror literature in the late 19th and early 20th centuries by the loose style/affect/trend known as 'the Weird'.  Lovecraft, Hodgson, Machen, etc.  They used various new forms of the monstrous, especially tentacles, as a 'novum', unfreighted with previously accreted meanings and associations, which could express something of the unprecedented, inexplicable, inexpressible catastrophic horror that was engulfing modernity with the onrush of world war, mechanised imperialism and endemic economic crisis.  (There were a couple of important pre-eruptions of the tentacular and Weirdish courtesy of SF pioneer H.G. Wells and 'ghost story' writer M.R. James.)  Mieville says that the Weird represents a way of trying to express anxieties that is alternate and incompatible with the gothic.  The gothic - or hauntological - is an expression of something we already know which has been hidden (or repressed) and which haunts us, threatening to return.  The Weird is what we ...

This is a slightly-tweaked version of something originally published in the January 2011 edition of Panic Moon.  Back issues of this excellent fanzine (now, sadly, on hiatus) are still available, here.


Plant monsters. That’s an old one. Where does it come from? Maybe it’s about the Venus Fly Trap, the cactus or the thorns on the stem of a rose. Maybe it’s about the faces that we see in the gnarled bark of trees; the faces that gave us generations of tales about tree folk. We see this in 'The Seeds of Doom', in the initial humanoid shape of the monster, in its booming threats, in its communion with Chase, in the way that the Doctor keeps calling it Keeler ironically, having chided Sarah for referring to the transformed Winlett by name.

Maybe it’s the sheer unnerving silence and mindlessness of things that nonetheless seem to have flesh and veins and skin, that nonetheless grow and move and breed.  We see this in 'The Seeds of Doom', with all the emphasis on skin, blood and pain… and Chase’s obsessional desire to “see what happens when the Krynoid touches human flesh”. We see this in the way the Krynoid moves, unfettered ... 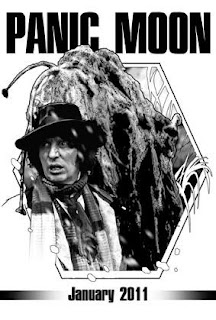 A Critique of the Gothic Seasons

Yes, I know I've already done that joke... but it's too good not to overuse.  Here's my stuff from Timelash II for the first three years of Tom's tenure, generally regarded as the "golden age" (or something) of the old show.  Not much extra stuff.  Sorry.  Oh, one warning: at several points in the essay below I will be going into gush mode.  You have been warned.

Dafter than the Rt. Hon. Lady Daftetta Daftington-Dafton of Daftwood Hall, Daftfordshire. A robot that grows to the size of King Kong (and starts acting like him)... a disintegrator gun kept in pieces and scattered in different locations... a government think tank that turns out to be a cover for fanatical right-wing scientific 'progressives' who think a good way to take over the world would be to destroy it first... umm, well actually the last ten years or so have made that last one seem quite plausible.